Alexander (Sasha) Staruschenko joined the Department of Physiology as an Assistant Professor in November 2007 and was promoted to Associate Professor in 2012.

The Staruschenko Lab is interested in the normal and pathophysiological regulation of ion channels in the kidney. A particular emphasis is placed on the epithelial Na+ channel (ENaC). 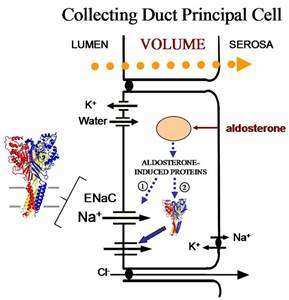 The long term control of blood pressure involves Na+ homeostasis through the precise regulation of ENaC in the aldosterone-sensitive distal nephron. ENaC is a member of the ENaC/Deg channel superfamily. ENaC/Deg channels are rather distinct in that they are non-voltage gated, highly Na-selective channels. ENaC activity is rate limiting for Na+ reabsorption in the distal nephron. Abnormalities in ENaC function have been linked to disorders of total body Na+ homeostasis, blood volume, blood pressure, and lung fluid balance. Gain of function mutations of both β and γ ENaC leading to channel hyperactivity (Liddle's syndrome) are two the only known forms of monogenic hypertension. Recently, ENaC dysfunction has also been demonstrated in renal epithelial cells from animals and humans with Autosomal Recessive Polycystic Kidney Disease (ARPKD), which is a renal cystic disease confined to the distal nephron associated with improper handling of NaCl. We are specifically focused on the role of ENaC in the development of salt-sensitive hypertension and mechanisms involved in regulation of this channel in this disease setting. 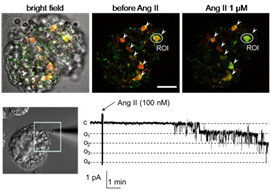 Another area of interest is regulation of Transient Receptor Potential Canonical (TRPC) channels in podocytes. Glomerular podocytes are central components of the renal filtration barrier, and, at least in part, play a role in the pathogenesis of almost all proteinuric glomerulopathies. TRPC proteins, which belong to the larger TRP superfamily of channels, form Ca2+-permeable channels that are important players in the pathogenesis of renal and cardiovascular diseases. An association between altered TRPC channel function and/or expression with the development of various kidney diseases has garnered the attention of many investigators. TRPC6 is an essential component of the podocyte slit diaphragm, where it is integrated into a signaling complex that interacts with nephrin, podocin, alpha-actinin-4, calcineurin etc. Several independent laboratories have reported the identification of TRPC6 mutations associated with autosomal dominant FSGS. These genetic discoveries highlighted the critical importance of the podocyte and TRPC6 channel in the maintenance of the glomerular filtration and raised the possibility that abnormalities of the podocyte may also play a role in more common glomerular diseases such as diabetic nephropathy.

Additional emphasis is placed to the role of reactive oxygen species (ROS) and other paracrine signaling molecules (such as ATP) in the control of ion channels in the kidney and renal function, respectively. ROS, and specifically H2O2 in the kidney plays a critical role in the development of salt-sensitive hypertension. For example, chronic administration of H2O2 into the medullary interstitium of salt-resistant rats produces a salt-sensitive form of hypertension while medullary infusion of catalase to Dahl salt-sensitive rats reduces hypertension by nearly 50%. Purinergic signaling system intrinsic to the distal nephron similarly enables the kidney to dynamically match Na+ excretion to Na+ intake as a homeostatic mechanism to maintain blood pressure within a normal range despite broad changes in Na+ consumption. We recently developed a new approach based on enzymatic microelectrode biosensors allowing us to measure basal levels and real time endogenous substances release in the kidney in response to drug perfusion. Using this innovative approach in combination with microscopical analysis and electrophysiological measurements of ion channels in isolated glomeruli and nephron segments we are focused on the role of ROS and ATP in regulation of renal ion channels and control of blood pressure.

We use a number of contemporary methodologies, including electrophysiology, molecular biology, biochemistry, and fluorescence microscopy to investigate regulation of ENaC, TRPC, Kir and other ion channels in the kidney. We routinely use reconstituted channels in mammalian expression systems, immortalized epithelial cell lines and freshly isolated collecting ducts and glomeruli in this regard. 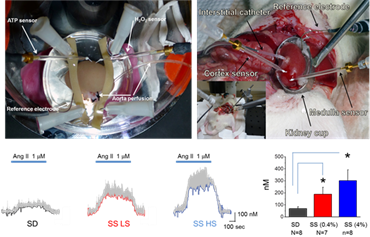 Currently we are working on a numerous projects related to ion channels in the kidney. Our main goals are: 1) To define mechanisms and relevance of ENaC regulation by members of the epidermal growth factors (EGF) family in salt-sensitive hypertension; 2) To identify the small G proteins responsible for trafficking of ENaC; 3) To define the cellular and molecular mechanism by which H2O2 modulates ENaC activity; 4) To determine mechanisms of regulation of TRPC channels in podocytes; 5) To determine mechanisms of the excessive calcium flux in podocytes in diabetic nephropathy; 6) To determine the relationship between ENaC activity and cystogenesis in PKD; and 7) To define specific role of Kcnj10/16 heteromeric channels in the kidney.