Dr. Fu received his PhD degree in Protein Crystallography from University of Pittsburgh in 1994. He spent a postdoctoral period in the laboratory of Roger Kornberg at Stanford University School of Medicine, where he cracked the phase problem in determining the crystallographic structure of RNA Polymerase II. Dr. Fu received fellowship awards from Universitywide AIDS Research Program (University of California) and American Cancer Society. Since 2000, his laboratory has been funded by the NIH to study the structural mechanism of RNA polymerase II machinery. Dr. Fu joined the faculty at Medical College of Wisconsin in 2007. Dr. Fu welcomes MCW graduate students to discuss prospects of thesis research in the area of Structural Biology. Potential postdoctoral scientists are encouraged to communicate their interests as well.

Structure of the 12-subunit RNA polymerase II refined with the aid of anomalous diffraction data.

This figure shows the most complete structure of RNA Polymerase II (Pol II), the enzyme that reads genetic sequences from chromosomes in the nucleus of a cell. The Pol II model is rendered in the form of ribbons (most of it in blue) and laid over a background image of chromosomal DNA. The structural work was performed in the Fu lab by utilizing the power of anomalous scattering from 8 Zn2+ ions bound intrinsically in the polymerase. This latest model reveals the previously undetermined loop (green) that is implicated in contacting the general transcription factor TFIIF, and defines conformation for the loop (orange) that crosslinks with TFIIE. 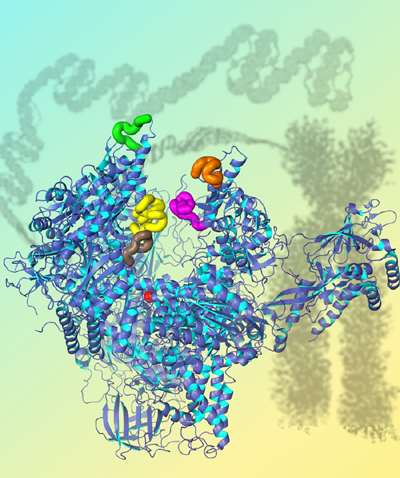