Coronary blood flow is well controlled by many humoral factors in blood or local heart tissue. Several compounds released from endothelial cells that line the lumen of coronary vessels play a crucial role in the control of coronary blood flow. The most important of these compounds is a group of vasodilator substances called endothelium- derived vasodilators such as nitric oxide (NO), prostacyclin and epoxyeicosatrienoic acids (EETs). However, the mechanism by which these endogenous vasodilators dilate coronary vessels remains unknown and is a major focus in our laboratory. Using electrophysiological, biochemical and molecular approaches, we are studying the signaling pathways for the action of these endothelium-derived vasodilators.

Cyclic ADP-ribose (cADPR) serves as a second messenger to mediate intracellular Ca2+ mobilization independently of IP3 signaling pathway in different tissues. This cADPR-mediated Ca2+ signaling participates in the regulation of a variety of cell function or cellular activities. Recent studies from our lab demonstrated that cADPR induced Ca2+ release from intracellular stores of coronary arterial smooth muscle cells (CASMC) and the inhibition of the production of cADPR by NO results in the relaxation of coronary arteries. However, the mechanism by which NO inhibits the production of cADPR remain unknown. To determine whether cADPR-mediated Ca2+ signaling pathway contributes to the inhibitory effect of NO on [Ca2+]i in CASMC, we will examine the effects of NO on the production or metabolism of cADPR by RP-HPLC analysis of ADP-ribosylcyclase and cADPR hydrolase activities and to explore the mechanisms by which NO modulates these enzyme activities in coronary arterial smooth muscle. The involvement of cGMP and nitrosylation-mediated dimerization of ADP-ribosylcyclase in the effect of NO will be determined. Using video microscopy of isolated pressurized small coronary arteries, we will determine the role of cADPR, CICR and ryanodine receptors in the development of coronary tension and in mediating the vasodilator response to NO. Finally, we will explore the precise mechanisms by which cADPR binds or activates ryanodine receptors and produces Ca2+ release from the SR using radioligand binding or ADP-ribosylation assays. These studies will define a new signaling mechanism regulating [Ca2+]i and vasomotor response in coronary resistance arteries and increase our understanding of the cellular mechanism mediating the vasodilator effect of NO.

RyR/Ca2+ release channel is a pore located on sarcoplasmic reticulum (SR) membrane, which plays an important role in the mobilization of intracellular Ca2+ from SR. It has been reported that cADPR induced Ca2+ mobilization through these channels. However, the mechanism by which cADPR activates Ca2+ mobilization is poorly understood. We hypothesize that endogenous cADPR-induced Ca2+ release contributes to the control of [Ca2+]i in vascular smooth muscle cells from small coronary arteries and that NO decreases intracellular cADPR production and consequently lowers [Ca2+]i , thereby resulting in vasodilation. We will examine the role of cADPR in the regulation of ryanodine receptor/Ca2+ release channel activity using RyR/Ca2+ channel reconstitution and lipid bilayer clamp techniques and determine the role of cADPR-mediated activation of RyR/Ca2+ channel in the control of intracellular [Ca2+] in coronary arterial smooth muscle cells and the contribution of this signaling pathway to the inhibitory effect of NO on [Ca2+]i using single cell fluorescence microscopic spectrometry and to address whether the cADPR-mediated effects of NO are associated with inhibition of RyR/Ca2+ channel. 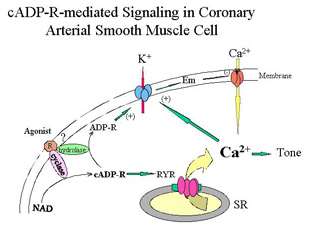 The diagram summarizes the detailed working hypothesis. Under resting conditions, the ADP-ribosylcyclase in coronary arterial smooth muscle converts NAD into cADPR, which mediates or modulates intracellular Ca2+ mobilization through activation of ryanodine receptors on the SR and thereby participates in the control of basal vascular tone. NO inhibits ADP-ribosylcyclase activity and consequently decreases intracellular cADPR levels, resulting in reduction of SR Ca2+ release and vasodilation.

We will use biochemical, physiological and pharmacological approaches to explore the mechanisms related to this hypothesis.