Conversation with a Standardized Patient 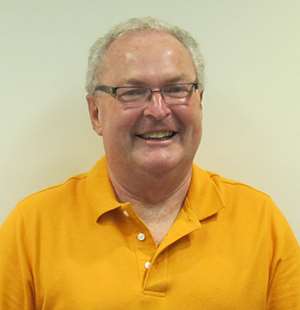 Russ has been with the Standardized Patient Program since 2007. After graduating from the University of Maryland with a BA in English, he joined the Peace Corps, serving two years in Peru working in community development and teaching at the University of San Marcos in Lima. On his return to the U.S., he began teaching high school English for several years in Maryland before moving to Racine, where he taught for Racine Unified School District as well as Concordia University and UW-Parkside. He retired after forty years of teaching and stated he was happy to be back in the teaching field again, this time as a standardized patient, or SP, with the Medical College of Wisconsin. Since 1969, Russ also has had an extensive theatre background as a life-member on stage and back stage with the Racine Theatre Guild.

Russ has role played over 33 scripted scenarios in addition to serving as a patient for head-to-toe physicals, bench-to-bedside events, and sensitive exams. One of his early cases dealt with the onset of early memory loss. He said he went home, did hours of research dealing with associated symptoms, only to realize he forgot what the S in SP stood for – standardized. From then on, he learned the importance of “sticking to the script,” perhaps the most important component of being a SP.

While Russ has enjoyed the variety of cases he has played, he finds those dealing with issues facing people his age quite relevant. End-of-life decisions, physical problems, and mental issues are all encounters he finds personal. Russ likes to get into his roles; he can cry almost on demand. As a result, students can work with an emotional patient and deliver unexpected and/or devastating information at the same time. Producing tears six to eight times in a row can be emotionally draining, he said, so some acting may be needed. A recent favorite was a dementia scenario that involved partnering with MSOE. Russ was lying in a hospital bed in a somewhat altered mental state, showing signs of confusion, restlessness, and agitation. While students were trying to collect information, he attempted to get out of bed by rolling to one side. He started to slide off the bed, but the students were not able to stop him. So, he decided to go with role, slid to the floor and remained there. While he does get into character with the roles he plays, he did say this was a great, unexpected learning experience for the students, and they handled it well.

On the lighter side, Russ remembers another early case where first year students were introduced to interviewing techniques of patients dealing with smoking cessation. One student was designated as the student-doctor and tried to convince Russ’s character to stop smoking. Russ was instructed to be resistant, recalcitrant, and even obnoxious to the student, which was all part of the script. He was interviewed by a rather quiet young lady who met Russ two years later as a standardized patient in the head-to-toe physical. He remembers she entered the room and the first words she said were, “I remember you. You made me cry two years ago!” But, she also said that she learned that patients are not always accommodating just because a doctor tells them to do something.

Over his twelve years of being part of the SP program, Russ reflects on how impressed he is to see how the program has grown. Great care is taken to match real life actors with their SP roles as much as possible. In the early years, he played the role of a thirty-five-year-old male while he was in his mid-sixties because no one of appropriate age was available. He reflected that, especially over the past five or six years, new people have been recruited, making it possible for students to have a more realistic encounter with a SP. In addition, he is also impressed with the training and constant review given by SP program staff and the medical professionals associated with the SP program. Now standardized patients have direct contact with various types of medical professionals to gain knowledge of how cases should be handled. And, if questions arise, the program staff consults the appropriate source for an answer.

Russ is very impressed with the professionalism shown by the staff at the STAR Center. They constantly upgrade cases and ask for input from the standardized patients. He believes there are high standards for the program to help us meet our goals. The team’s enthusiasm for the program is infectious. He feels the sincere gratitude given to the SPs is paramount in making the program what it is today. He feels very blessed in being part of MCW’s SP family.