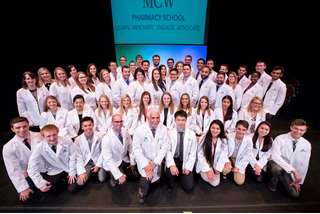 The desire to have high quality, team-based education at the Medical College of Wisconsin (MCW) was fulfilled this August as the School of Pharmacy’s inaugural class was officially welcomed to the first new school at MCW in more than 20 years.

The aim of the MCW School of Pharmacy is not only to educate the pharmacists of the future, but also create new and innovative practice models and interprofessional health care teams that leverage the role of the pharmacist to deliver patient-centered care with improved health outcomes. The MCW School of Pharmacy is the only three-year PharmD program in the Midwest that is located at an academic medical center, providing access to world-renowned resources at Froedtert Hospital and Children’s Wisconsin and partnerships with the Clement J. Zablocki VA Medical Center for students and faculty alike.

“As pharmacists, you will truly have the opportunity to come out from behind the counter, lay your hands and stethoscopes on patients and perform physical assessments for chronic disease management,” said Dr. MacKinnon.

The MCW School of Pharmacy curriculum incorporates longitudinal interprofessional education (IPE), where pharmacy students interact and learn with other healthcare students and professionals. MCW Pharmacy, Medical and Master of Science of Anesthesiology students already participated in their first interprofessional team-building activity on the very first day of Orientation on August 7th. The School of Pharmacy IPE curriculum includes both experiences in the classroom and exposures in laboratory and clinic settings.

Marquette University and the Medical College of Wisconsin are building a strong foundation for their new Joint Biomedical Engineering department (BME), an endeavor that combines Marquette’s engineering education and research expertise and MCW’s medical research, technology and clinical expertise. Bringing these individual strengths together will result in a department capable of advancing patient care and supporting economic growth in the region.

Launched in the summer of 2016, BME will enable students to advance their learning, problem-solving skills and research experience through exposure to both engineering leaders and faculty physicians who are working on solutions to challenges in clinical settings.

“When you combine the minds and skillsets of engineers, scientists and physicians, you come up with potential solutions to problems that might not have been thought of otherwise,” says Brian Hoffmann, PhD, assistant professor of biomedical engineering.

The connection of these groups of individuals and the possibilities it creates for a more translational research environment was one of the driving reasons Dr. Hoffmann joined the BME faculty.

“I saw the opportunities forming for professional growth through these new networks. This collaboration of different backgrounds will allow the department to really make a difference from the undergraduate level and up throughout all programs,” says Dr. Hoffmann.

Having the ability to learn and conduct research in this type of environment caught the attention of Cagatay Dursun.

Cagatay was a graduate student at the University of Chicago and received a recommendation to reach out to Mary Shimoyama, PhD, associate professor, medical informatics, bioinformatics, genomics and genetics, about an innovative new program being developed in BME.

After hearing the story of the joint department from Dr. Shimoyama, Cagatay applied and became one of the first PhD students in the new joint degree program.

“I was really excited about the joint atmosphere – it provides a research environment for PhD projects and a rich teaching environment to learn the necessary skills and collaborations for my research,” says Cagatay who is now in his second semester studying computational biology and bioinformatics.

Although a new department, the promise of this opportunity encouraged Cagatay to move. BME continues to build this foundation and is positioned to grow its student enrollment steadily over the next years.

Over the last several years, the education offerings at MCW have continued to expand and thrive. These growth initiatives in each of our schools – medical school, graduate school and pharmacy school – have helped us provide streamlined and efficient services to every MCW student.

The new student information system, MCWconnect, will become available to MCW students next year and is a major step in integrating the infrastructure that supports MCW’s education programs.

This transformation has led to separating out Medical School functions, such as Admissions, Curriculum and Student Affairs, from Academic Affairs functions. Services that comprise Academic Affairs are those which are provided to all MCW students including:

This new structure aligns core service activities that support all schools and campuses from program activities specific to medical education.

As MCW continues to focus on training the next generation of physicians, pharmacists, scientists and healthcare professionals, we remain committed to creating a unified experience for all of our students. 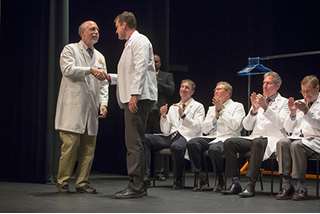 When Christopher Zeman was preparing to welcome his third child, he and his wife learned their daughter was going to need some extra attention and surgery. It was during this particular time that Christopher first encountered the difficulty of finding adequate health care. Rural areas of Wisconsin have been especially hit with a shortage of physicians. According to the Wisconsin Hospital Association’s report (PDF), it is projected that Wisconsin will need to add 100 new physicians annually to avoid a projected shortfall of 2,000 by 2030.

“It was pretty difficult to get even the most basic levels of care, and to get her condition diagnosed and treated,” said Christopher, a member of the inaugural MCW-Central Wisconsin class. “There was such a shortage of doctors that we had to wait almost a month to determine what was going on with our newborn.”

This experience tipped the scale in favor of Christopher applying to medical school, after 11 years of service in the U.S. Army. “Now that I’m going through medical school, I feel like I’m coming full-circle, giving back to the community and making it better.”

The matriculation of Christopher and his MCW-Central Wisconsin classmates in July 2016 marked the culmination of more than four years of development and planning to build the community-based medical education program created on a partnership model.

While Christopher is now in his second year of medical school, he already knows he will serve the people and communities in north central Wisconsin and the Upper Peninsula of Michigan after he completes his residency – thanks to the Aspirus Scholars Program.

The innovative Aspirus Scholar Program, aimed to address the national physician shortage, is a community collaboration providing scholarships to medical students and advanced practice provider students in return for future employment at Aspirus in the areas of primary care, psychiatry or general surgery. Christopher was selected to receive the $150,000 Aspirus Scholars award in exchange for five years of service at Aspirus after completion of his residency.

“Working with Aspirus as one of our key community partners is allowing us to recruit local students who want to attend medical school in the region, and ensure that they have the ability to stay and practice in our Central Wisconsin communities,” said Dr. Dodson. “We couldn’t be more excited about the Aspirus Scholars Program and what it will mean to our students and to healthcare in our community.”

“We’re so proud that Chris has chosen to accept the Aspirus Scholars award and join Aspirus. He and his family have strong ties to north central Wisconsin, and he is passionate about medicine and caring for patients. He will be a tremendous addition to the Aspirus family and to our community,” said Kalynn Pempek, executive director of the Aspirus Health Foundation.

Christopher and his family plan to call the north central Wisconsin region home for many years to come. “There is such a huge focus on community involvement and community – this is the perfect place for me. I would like to stay in the community as long as I can.”