Student uses opportunity of new Master's program to thrive, get into medical school

Brandon Free of Prairie Du Sac, Wisc., has been interested in going to medical school ever since he volunteered at a free local clinic in his home town during high school. But when he wasn’t accepted into MCW’s medical school, he pursued another avenue that opened up this past year – MCW’s Master’s in Medical Physiology program. 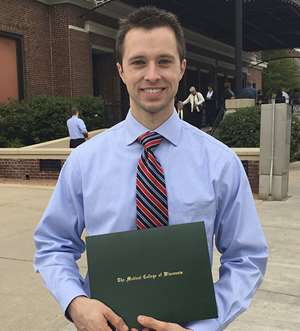 The Master’s in Medical Physiology (MMP), which graduated its inaugural class in May 2016, is a one-year intensive program designed to improve a college graduate’s academic record for application to medical school. When describing his experience, Brandon said the program’s intent was for MMP students to complete the same coursework as the first-year medical students. The MMP students enroll in all of the M-1 courses except for the intro clinical course – which is replaced by a physiology seminar.

“It was like being thrown in the deep end of a pool and having to sink or swim,” said Brandon, who was one of the program’s first seven graduating students.

The MMP program is closely integrated with the M-1 curriculum by design to provide students with a comparable experience and to allow evaluation as to whether the MMP students are ready for the academic rigors of medical school.

“I really liked the way the Master’s program threw you right in the mix with the medical students,” Brandon said. “I felt like an underdog and that I had to prove that I belonged in those classes. I look back with pride that I was able to hold my own.”

Brandon and the other MMP students were not left on their own, however. “MCW did a great job of providing the resources that we needed to succeed academically,” he said. “The seven of us in the program formed a close bond and helped each other better understand the material in preparation for the exams.”

It is clear that Brandon not only survived, but thrived during the year-long program. In addition to graduating with his MMP degree, he also was accepted to MCW-Milwaukee for the Medical School Class of 2020.

The first-year medical student knows that there will be many challenges on his way to his next degree. With his MMP under his belt, however, Brandon is confident that he can overcome the challenges ahead.

“Completing my MMP degree definitely prepared me for medical school. I am looking forward to starting my journey toward becoming a physician.”