She can see herself teaching the next generation of physicians and scientists.

Fourth-year MCW doctoral student Melanie Gartz, MS, MHS, would like to teach some day because it is where she believes her skills lie. But for now, she is having a successful career doing research in support of her thesis project. So much so that she’s already published two papers, recently won the Women in Science Graduate School Student Award and is pursuing a predoctoral fellowship award. 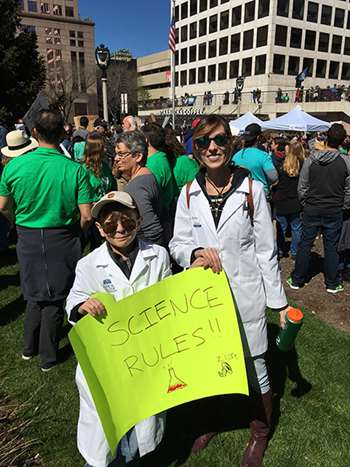 Melanie, a student in the Department of Cell Biology, Neurobiology & Anatomy, is conducting her research under the mentorship of Jennifer Strande, MD, PhD, looking at what causes heart failure in people with Duchenne muscular dystrophy. Her resume of science-related jobs and degrees is impressive. She earned a master’s degree in microbiology and immunology at Johns Hopkins, worked as a microbiologist at Froedtert Hospital, earned her master’s degree at MCW in cell biology, and worked in a research lab as a lab tech. And during much of this, she was raising a son who is now 10.

It is her son who generates much of her drive.

“I have brought him into the labs, and it is wonderful to see him express an interest in research,” Melanie said. “I would love to inspire him to become a scientist someday.”

Melanie is currently taking the MCW human anatomy course and says she can see herself teaching the next generation of physicians and scientists in classes such as anatomy, basic cell biology and cell signaling.