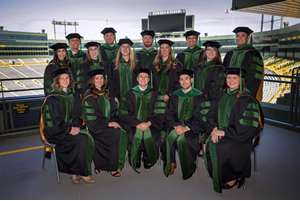 Last time we checked in, we were post Match Day. The intervening weeks were a blur, a flurry of filling out forms and looking for houses and (still) doing rotations and (still) taking exams and celebrating our preceptors and donors that so genuinely supported this endeavor. There were few moments to take a breath and just stop and reflect on what we’d done.

Graduation dinner was a special evening. A few family members, special partners of the school joined us, the inaugural class, in a time of reflection and festivity. Classmates and preceptors and faculty were recognized for contributions, with Dr. Joe Kellner winning the Distinguished Clinical Faculty Award, Dr. David Hunnicutt being given the Distinguished Basic Science Faculty, and Dr. Sarah VanderZanden granted the Outstanding Faculty in Medical Education. Taking home the Outstanding Graduate prize was the celebrated and dauntless face of MCW-Green Bay Alexander Sliwicki!

After the hustle and bustle of the week leading up to graduation (some of us took a test less than 24 hours before graduation!) I was very much looking forward to the ceremony, both the chance to be together with family and my own 1st Year Preceptor and piano playing partner in musical performances, Dr. Steve Asma, but also because I had the opportunity to deliver a brief message to my classmates on stage.

I hope you enjoy that speech, and it gives you one more (but not last!) glimpse into what has made MCW-Green Bay such a special place to go through medical school. While we’ll be taking a hiatus for a few months, check in next year around this time, as a few more members of the Inaugural Class will be completing their education and can wrap up the Pioneer Press in style.

Wow! Fellow graduates of the inaugural class of the Medical College of Wisconsin. Almost doctors (I get to be one of the last people to say that!). Look at what we’ve accomplished! And by we, I mean everyone in this room. Students. Family. Faculty. Preceptors. Donors. This is exciting stuff.

Good afternoon everyone! My name is Matthew Wheeler. It’s my privilege to be able to share with you a few thoughts today. So two weeks ago, I had just finished my last rotation and was thinking, “Ah! This will be great! A little time off before residency..” and no sooner had I thought that then Dean Hunsaker called and asked if I wanted share a few words, and before I thought too long about it, I said yes. It was only a couple of hours later that I realized I’d probably better have something intelligent to say, so I did what any good medical student would do and procrastinated until that moment when the fear overwhelmed the anxiety.

I didn’t really know where to start. But the last few weeks, a certain story has been resurfacing in my mind. It was from way back in my childhood. I used to have these stories on cassette tape… by the way, I am the oldest person in my class… for my younger colleagues, cassettes were the things before CDs but after 8 Tracks. So this story was about two young brothers, who happened to spend a few years of their lives in the town I grew up in – Cedar Rapids, Iowa. We had a street in our city named after them. Exciting stuff for Iowa. These brothers were destined to do great things later on in life. But in their twenties, you know what they did for a living? Bicycle racing, bicycle building, and bicycle repair. They started off modestly, in their backyard, scrapping together spare parts to construct a new fangled style of bicycle – the version we all know and grew up with, not that silly Victorian era design with the one big wheel. Why, they were even early adopters of the crouch over the handlebars racing method. It was more aerodynamic, and more efficient. So in this story, there was a big race, the brothers were pretty hard up for cash, and, believe it or not, they won the thing! Pretty soon, people started to pay attention and believing that these two young men might be on to something, and their business took off. They could finally pursue their dreams.

Kind of an odd story for me to be thinking about as we approached graduation, huh? What was it about this story that I kept I coming back to mind here in these final weeks of medical school? After all, it’s not a very medically oriented story. And yet, I found myself relating to these two brothers. Mostly that whole tight on cash bit. But really, like them, we were born into a changing world. Medical education is in a state of upheaval as technology and methods of delivering information are causing us to rethink what education should consist of; but MCW embraced this change as an opportunity. Like those brothers, we found ourselves at the right moment to strike out on our own new journey. Even if it meant scrapping together, at times, the spare parts to make a not a sleek, expensive, name-brand medical school experience, but a lean, efficient, hard knock, get back up again, don’t ever quit, I can do anything for a day, for a week, for a month, for a year, education. And it was hard, but oh, has it been good.

We passed boards 100%, we matched to residencies 100%. With the raised eyebrows and curious glances of medical education directed at us, we rose up, we blazed trails, we pioneered - yes, it’s true! We succeeded more than anyone could have hoped for. But there was so much more than that. Beneath the surface of that very visible journey was something only a few people ever got to see. We experienced life together. For three years, I don’t think there has ever been a tighter class of medical students. We had kids, we had family emergencies, we had weddings and breakups, we had canceled flights and cross country road trips – there was never an opportune time for these things! We know each others strengths, we’re more than aware of our deep flaws, and yet, in this forge of life called medical school, I know we have truly become family. You all, this journey together - you are among the greatest privileges I have ever had. We have struggled together, we have cried together, we have unified in support of each other. But we have also conquered together. We have ran the race, or should I say pedaled? And we have won.

First new medical school campus in Wisconsin since #Kittyhawk. You’ve heard it a lot recently! You know, Orville and Wilbur Wright didn’t wake up one day and decide they were going to change the world. Innovation isn’t an instantaneous process. No, sometimes, it starts off rather unassumingly, in a back yard bicycle repair shop, for instance. These last three years were our bicycle shop. So, graduates of the inaugural class of the Medical College of Wisconsin Green Bay – I challenge us to continue to innovate, to continue to blaze new trails, to keep on pioneering, to never forget that we have a home right here. But now, it’s time to spread our wings and fly.