"It's a Match" Today We Made History! 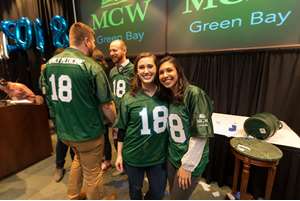 Well, the day had arrived. The day we had been waiting for the past three years. The day that would decide the course of potentially the rest of my life. It was Match Day. Not like it’s a big deal or anything.

For the first ever MCW-Green Bay Match Day, we arrived at the Bemis International Center for a pre-match rehearsal.  A full breakfast spread was served first before the major announcements were made, directing us and our families to our prospective seats and rooms where we were to open our envelopes. Family and friends were buzzing with questions of where everyone would end up, as preparations were streamed on the Facebook live feed. The whole shindig felt like a giant pep rally, complete with a drum line and giant match day balloons. Needless to say, our MCW-Green Bay staff had outdone themselves yet again.

One by one, we each had an opportunity to open our envelopes with our families first if we chose to.  I was shaking with excitement as I tore open mine, and searched frantically for the place I would be spending the next three years. And there it was: Gundersen!

Gundersen had been one of my top places from the beginning of interview season, and to see that this was the place I was matched into seemed surreal. After a ton of squealing, applause, and tears from my family, we left the room, tight-lipped about what the envelope said. At least for the next 15 minutes.

After an adrenaline-filled introduction, speeches, and a special congratulations message from the one and only Randall Cobb (pre-recorded from Hawaii), by the time the class of 2018 announced where they’d be taking the next steps of their journey, it had seemed like hours. There were even multiple pregnancy announcements that had the whole room cheering even louder. Even though I knew where I was going, I was incredibly nervous as to how to announce it. I can honestly say I couldn’t be happier, and not only that, I get to go Gundersen with one of my other classmates. And we didn’t even have to couples match! 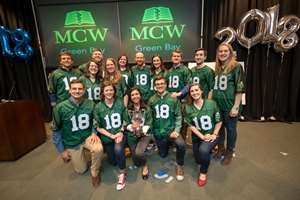 The whole day went by so fast, but it was one of the best days I’ve had since starting medical school. We’ve finally reached that point where the next phase of our careers is tangible. Donning #18 jerseys we proudly sported our specialties in front of our loved ones. Our cheeks hurt from smiling, but it didn’t matter because we had made it.  The “Final 15” had made history. It was an 100% match rate for the inaugural class of MCW-Green Bay, with 5 matching into internal medicine, 5 into family medicine, 3 into pediatrics, and 2 into psychiatry.  We had done what some had doubted we would be able to do. We forged ahead, despite the obstacles, with the support of staff, family, friends, and community. And for that we are humbled, blessed, and ready.

Between the post-match day celebrations and congratulations, we’ll wrap up our final clerkships, fill out mountains of employment (yes, employment!) paperwork, and prepare for the final graduation hurdle. All the while knowing that no matter where we end up, the experiences we’ve had at MCW-Green Bay will never be duplicated and never forgotten.
HAPPY MATCH DAY, CLASS OF 2018, AND IN THE WORDS OF ELLE WOODS “WE DID IT!" 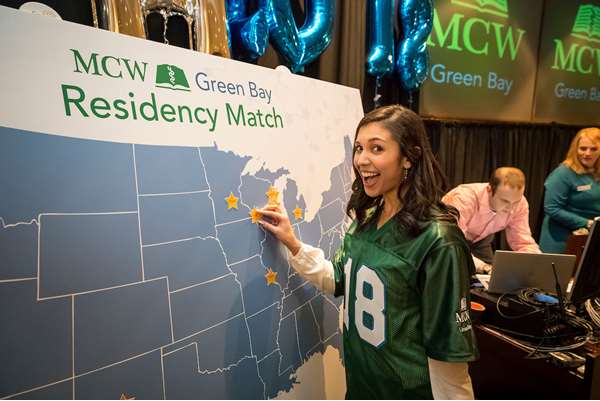