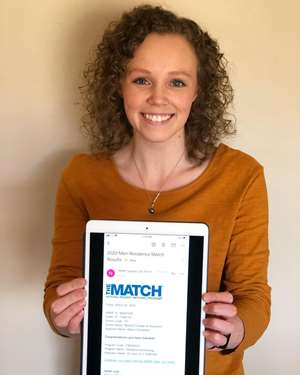 My name is Allison Gustafson, I am a third year MCW-Green Bay student who just matched into Obstetrics and Gynecology! Prior to last week, matching into OBGYN had never been accomplished in the 3-year curriculum, but I am proud to say that I was the first! From the beginning of medical school, I had my sights set on this specialty, but I never imagined that I would match in just three short years.

The accelerated curriculum at MCW-Green Bay starts with a clinical apprenticeship course where 1st year medical students are partnered with family practice physicians once a week alongside traditional coursework. The physician I partnered with incorporated low-risk obstetric care into their practice, including deliveries. My eagerness to participate resulted in delivering my first baby only one month into medical school!

The 2nd year at MCW-Green Bay involves a longitudinal clerkship in which students complete one rotation over the course of their 2nd year alongside M2 classes. My longitudinal rotation ended up being OBGYN! I started my first four consecutive weeks knowing that I was very drawn to this field of medicine. With each delivery, surgery, and even on-call shift I was amazed at how energizing this field could be. Being longitudinal, I was able to set my own schedule and electively dedicated additional hours to the clerkship beyond the requirements – 150 additional hours to be exact. I ended my 2nd year with 51 deliveries and a future specialty.

My specialty of choice was complicated by the fact that no one had ever matched into OBGYN residency through the 3-year curriculum; it had been attempted but never successfully achieved. I discussed this obstacle repeatedly with my preceptors, faculty, and friends, and their responses all pulled me in different directions. I entered my 3rd year of medical school with the idea that it probably could not be done, but I would set myself up for success in the miniscule chance that I would apply this cycle.

Following my first board exam, I began my first rotation of 3rd year: General Surgery. After this rotation, I had one month of elective time. I knew that in order to be competitive applying into women’s health, I would need an OBGYN elective sometime before applications went out in the fall. By the time I was able to apply for electives, my coveted specialty options had already been taken. Scrambling to figure out what rotation would still keep me competitive, I filled my elective time with Trauma Surgery in Milwaukee and started going through my options. The idea of choosing another specialty was not something that I could even consider as my heart was set on OBGYN. Realistically, I had two choices: I could chance it all to see if I could be the first to match in OBGYN in 3 years, or I could apply for a 4th year of medical school and try for OBGYN next application cycle. About 2 weeks prior to my application due date, I decided that I’d rather try now and risk failure than to not try and never know.

I swiftly got my personal statement written, letters of recommendation requested, and my application filled out. The part that complicated things was the unknown of if I would get interview offers. Would any program take me seriously? I decided at that point to add a month to the already busy curriculum. I scheduled a rotation in Maternal Fetal Medicine during what should have been a dedicated month of time off for my last two board exams and interviews. To accommodate for the extra elective time in December, I set up all of my interviews and one board exam during my fall rotations; however, this also meant that I had to make up extra rotation hours for time away. For over a month, I did not have one day where I was not traveling, interviewing, or attending rotations. I distinctly remember my last week of Internal Medicine; I had traveled to Chicago for one of my boards, did an interview the following morning, and returned to take my NBME shelf exam later that week.

Compounding to the stress of keeping with the curriculum, I was also concerned I would not match. The number of interview offers I received was less than anticipated, which was unfortunate because I did not have high expectations to begin with. I assumed my lack of offers was the result of my missing board exam that I was scheduled to take in late November during my Maternal Fetal Medicine elective. Discouraged, I held onto the idea that if my biggest concern in the world was not matching, then my life was pretty good.

In mid-November, I began my Maternal Fetal Medicine elective. Even though that rotation was above and beyond the 3-year curriculum requirements, I felt like it was essential to me. Every day of that rotation, I grew more motivated to become an OBGYN. I became more experienced in the nuances of difficult deliveries, but also became inspired by the joy of bringing another human life into the world. By the end of the rotation, my delivery count was at 76! To date, I have helped deliver 6 sets of twins, participated in numerous emergency c-sections, and assisted in the complicated delivery of triplets!

The downtime that came following my boards, interviews, and last NBME exam was difficult. Yes, I was still doing rotations and completing assignments, but it felt like a lull compared to the past several months. I continuously wondered if I was going to match, but I was committed, so I submitted my rank list and prepared for the worst while still holding onto a little hope. The time between rank list submission and the Monday of Match Week felt like years. As all my classmates anxiously awaited the Friday of Match Week to find out where they matched, I anxiously awaited the Monday news of if I matched.

On Monday, I received an email that read “Congratulations, you matched!” I must have reread that email at least 15 times over the course of the day, always expecting it to change. MCW had communicated a 100% match rate for our Green Bay campus which was followed by numerous emails and messages of congratulations. One week later and I am still in shock.  The anticipation, the excitement, the nerves, the stress – all of it worth it. I’m thrilled to announce that I will be starting at St. Louis University this summer as the first successful 3-year OBGYN applicant!

I want to take this opportunity to thank my family, friends, amazing preceptors and mentors, and also the MCW-Green Bay faculty for all believing in me and giving me the strength to defy all expectations and achieve my dreams!