In Addiction, One is Too Many and A Thousand is Not Enough 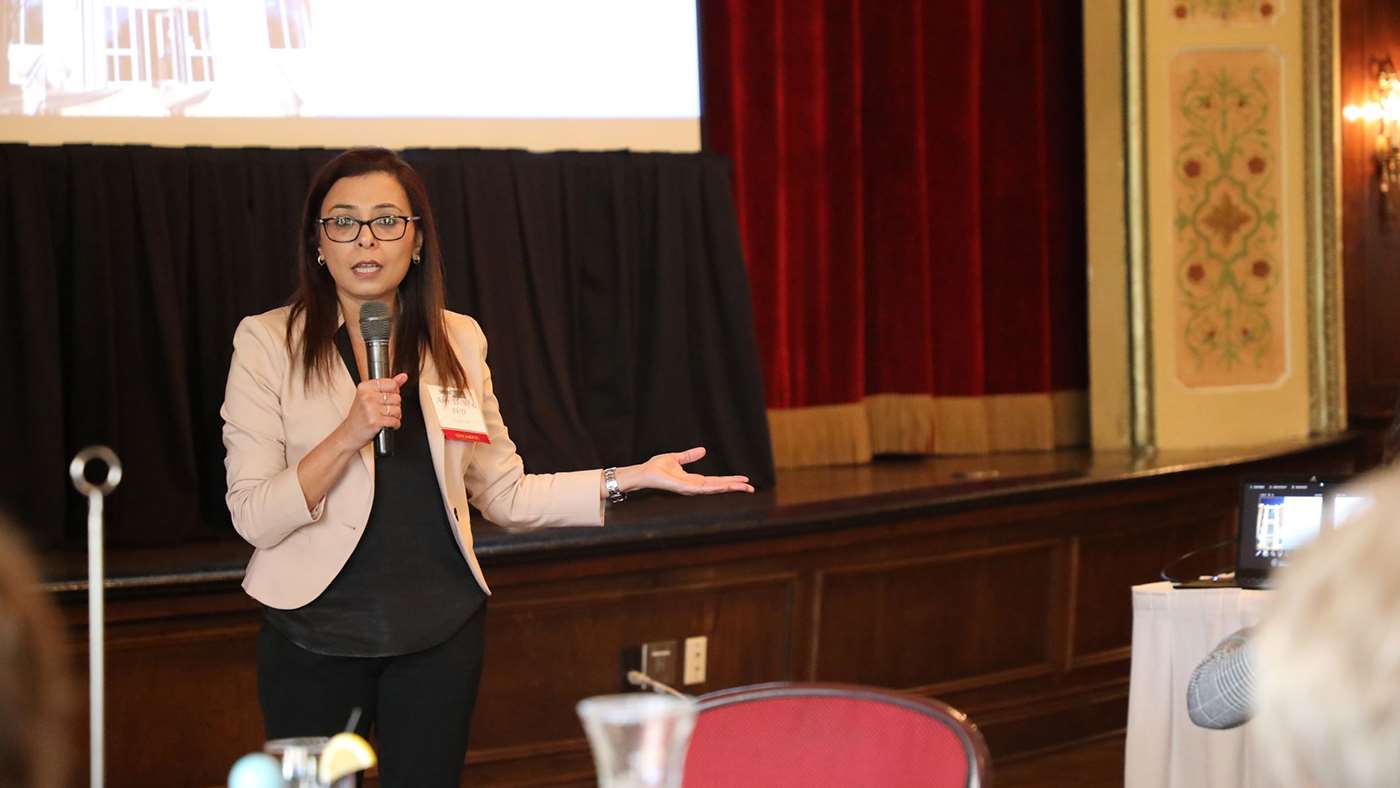 Substance abuse, including opioid dependence, is a public health problem that currently affects over 22 million people in the U.S and leads to over 70 thousand overdose deaths per year. Currently, only 18% of those who need treatment for addiction in the U.S. receive it.

Abir T. El-Alfy, PhD, MS, Associate Professor in the Department of Biopharmaceutical Sciences at the Medical College of Wisconsin (MCW) School of Pharmacy, spoke about addiction at the latest Women in Science presentation, which addressed a public audience. The Women in Science lecture series showcases the research of women scientists at the MCW. Dr. El-Alfy’s presentation, “Addiction: A Brain Disease Where One is Too Many and A Thousand is Not Enough,” was titled after a quote from the famous Irish author Brendan Francis Aidan Behan, who suffered from alcoholism.

Dr. El-Alfy focused on the concept of addition as a brain disorder and covered the neurobiology of addiction as well as its pathophysiological stages. Addiction progresses in three stages: binge intoxication, withdrawal negative affect, and preoccupation anticipation. Binge intoxication activates the brain’s reward dopamine pathway, while withdrawal increases stress factors in the brain, creating negative symptoms. In the preoccupation stage, a type of chemical messenger called glutamate plays a large role, working with stress, cues, and emotions to create cravings and the high potential for relapse. The patient typically cycles between these three stages.

Dr. El-Alfy highlighted concerns over the increasing rates of substance abuse by teenagers using vaping devices for nicotine and THC, which doubled from 2017 to 2018. “Early adolescent use increases the risk of addiction,” says Dr. El-Alfy.

At the end of her presentation, Dr. El-Alfy asked the crowd what word first came to their minds when they thought of addiction. “Disease,” one audience member volunteered.

“That’s right. Addiction is a disease. Next time you think of someone with substance use disorder, don’t think of a ‘junkie,’ think of a patient that has a brain disorder. A disorder that requires more than just pharmacological treatment. It requires connecting and bonding with society,” says Dr. El-Alfy.

Dr. El-Alfy has been involved with Women in Science since she began working as a faculty member at the MCW School of Pharmacy. “I try to attend as many of the sessions and panel discussions that they hold because I have been in science for 25 years and know the challenges that women can have when they try to find their place in science. I’m happy that MCW has an entity like this to support women that have or want a career in science,” she says.

Women in Science supports current faculty as well as students, including the MCW School of Pharmacy student Margaret Pertzborn, who nominated Dr. El-Alfy to give her presentation. “As a Women in Science committee member, I participate in coordinating speakers for our events. Another member thought a discussion on addiction would be interesting and I immediately thought of Dr. El-Alfy as she is a successful woman scientist and an excellent lecturer,” says Pertzborn.

One of the unique features of the Women in Science lecture series is that it is intended for a general audience. “It showcases women in science while addressing topics that are relevant to the community,” says Dr. El-Alfy. “It shows the scientific research efforts taking place in these topics while also giving public education on healthcare problems in the community.”