You will find Dr. Paul Hankwitz at every Medical College of Wisconsin clinical conference and symposium for senior physicians. He attends every one of his class reunions, and nearly every Medical College board of directors meeting, remaining active as a director emeritus. He is a past president of the school’s alumni association and currently serves as alumni representative on the board of trustees. He is undoubtedly dedicated to the Medical College, but if you ask him, he has “never been able to do enough.” 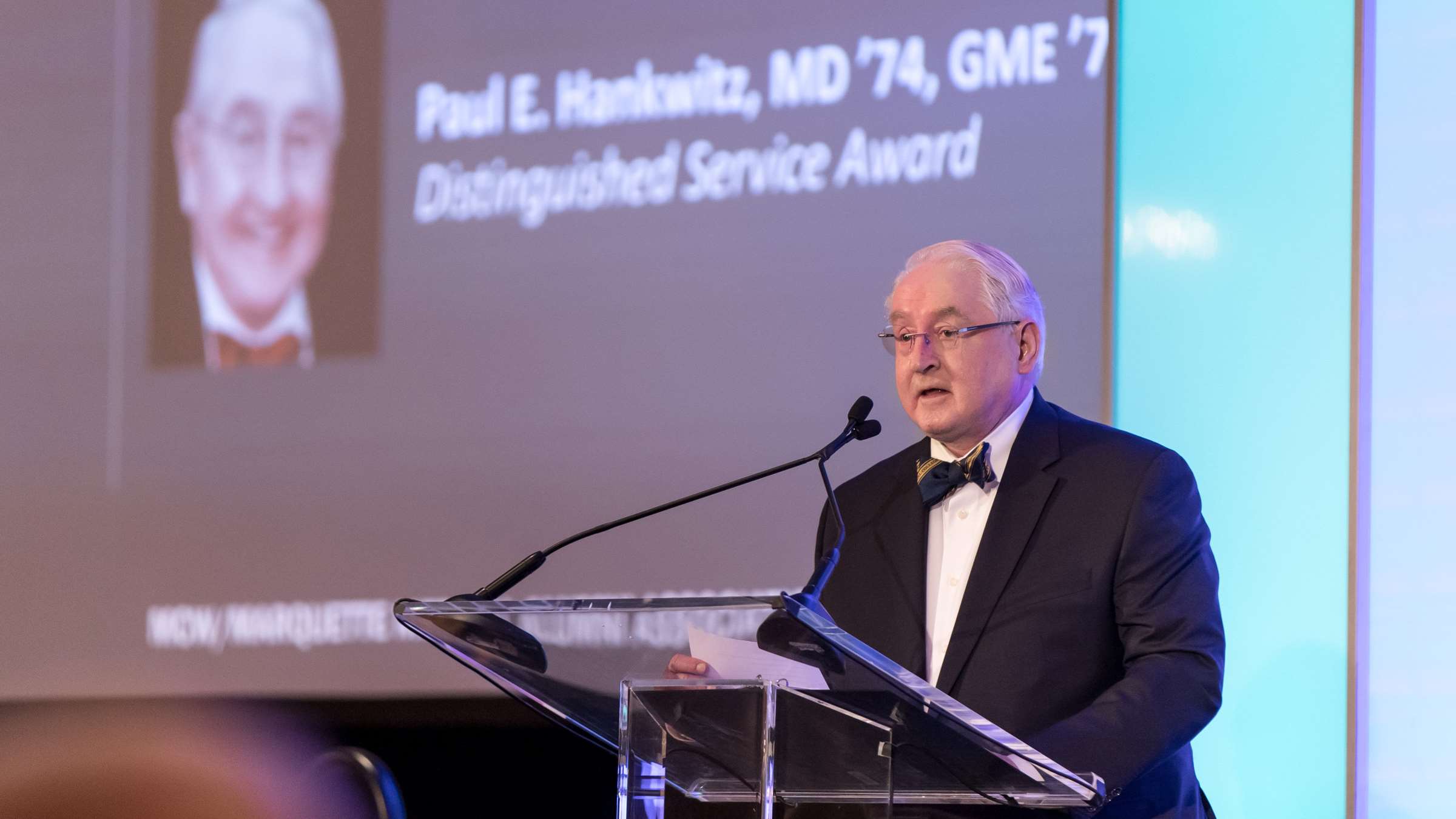 Dr. Hankwitz’s devotion to the Medical College stems first from his gratitude for making it in to medical school. He was initially on a waiting list, then by sheer chance, a spot opened up. As the last student accepted to his class, he was embraced by his classmates, who had decided they would work together as a team to make sure each of them succeeded. It was a camaraderie that the group maintained throughout and beyond medical school.

He also credits the Medical College for quite literally saving his life. In 2005, Dr. Hankwitz developed a severe lung condition called hypersensitivity pneumonitis. He sought care at the Mayo Clinic, where they took a lung biopsy and put him on steroids. He was on oxygen 24/7 and his health continued to decline.

He decided he needed to seek a second opinion, so he reached out to Medical College allergist-immunologist Dr. Jordan Fink. Dr. Fink took a different approach, both re-examining the lung biopsy and recommending that Dr. Hankwitz have his water heater and shower head tested for contamination.

The biopsy and tests confirmed that he had been breathing infected water. Once Dr. Hankwitz began to avoid breathing in moisture from his shower head, his health improved. Within 12 months, he was back to normal, his health fully restored.

Since medicine is a family tradition, Dr. Hankwitz says he never saw himself doing anything else. He is a fourth generation physician who, as a child, made house calls with his father, which inspired his dedication to make personal connections with his patients.

“It’s a completely different type visit,” he says. “You are being invited into a person’s home, so you get a glimpse into their personal lives that you don’t experience in a medical clinic setting.”

The house calls served as a model of the doctor-patient relationship for Dr. Hankwitz. He says that relationship building has always been its own reward for him, whether interacting with patients, with health care professionals at all levels or with medical students and residents in a medical setting.

It was fate that led Dr. Hankwitz to his specialty, internal medicine/geriatrics. When he started medical school, he thought he wanted to be a heart surgeon. “It was the hot thing in medicine at the time,” he explains.

But he quickly found that being left-handed in a field with equipment designed for right-handed people wasn’t going to work. From that point on, Dr. Hankwitz decided to apply his background and passion for personal interaction to caring for aging patients.

Since getting to and from appointments can often be a burden for elderly patients and their loved ones, and because he saw the benefits of home-based medical care while shadowing his father, Dr. Hankwitz founder of the American Academy of Home Care Physicians, an organization of health care professionals who promote the art, science and practice of medicine in the home.

It’s just one of the many accomplishments of his career, which he aptly describes as “eclectic.” Dr. Hankwitz served as medical director for several health care and assisted living organizations, including the Milwaukee Visiting Nurse Association, the Village at Manor Park Senior Healthcare System and CRL Senior Living Communities. At one point in his career, he was able to apply his expertise in geriatrics to a role with Northwestern Mutual, where he assisted with the development of a long-term care product and underwriting standards for older applicants seeking life insurance products as financial vehicles.

Dr. Hankwitz attributes his achievements to confidence he gained after being selected chief medical resident following his internal medicine residency at the Medical College.

“Before that, I didn’t know I had leadership skills,” he says. “That experience gave me the confidence to know that I could influence medicine.”

Today, Dr. Hankwitz works with veterans as a VA compensation and pension medical examiner with the Zablocki VA Medical Center in Milwaukee, a position that he says has brought his career “full circle.”

“I was never in the military,” he says. “I get to thank a veteran each work day for his or her service, and it helps me understand their military experience on a personal level.”

Dr. Hankwitz encourages all Medical College alumni to stay connected and to give back.

“I extend my greatest gratitude for all that the alumni have done throughout the years, and all that they currently continue to do, both with their time and financially.”

He points out that alumni support is incredibly important for student education, both within the Discovery Curriculum and the Community Medical Education Program the Medical College developed in the central Wisconsin and Green Bay regions to address the growing demand for physicians, especially in primary care and underserved areas.

“Those who choose the medical profession are naturally caring and giving people,” he says. “Look at your talents and how you can be an influence. You never know where it will take you.” 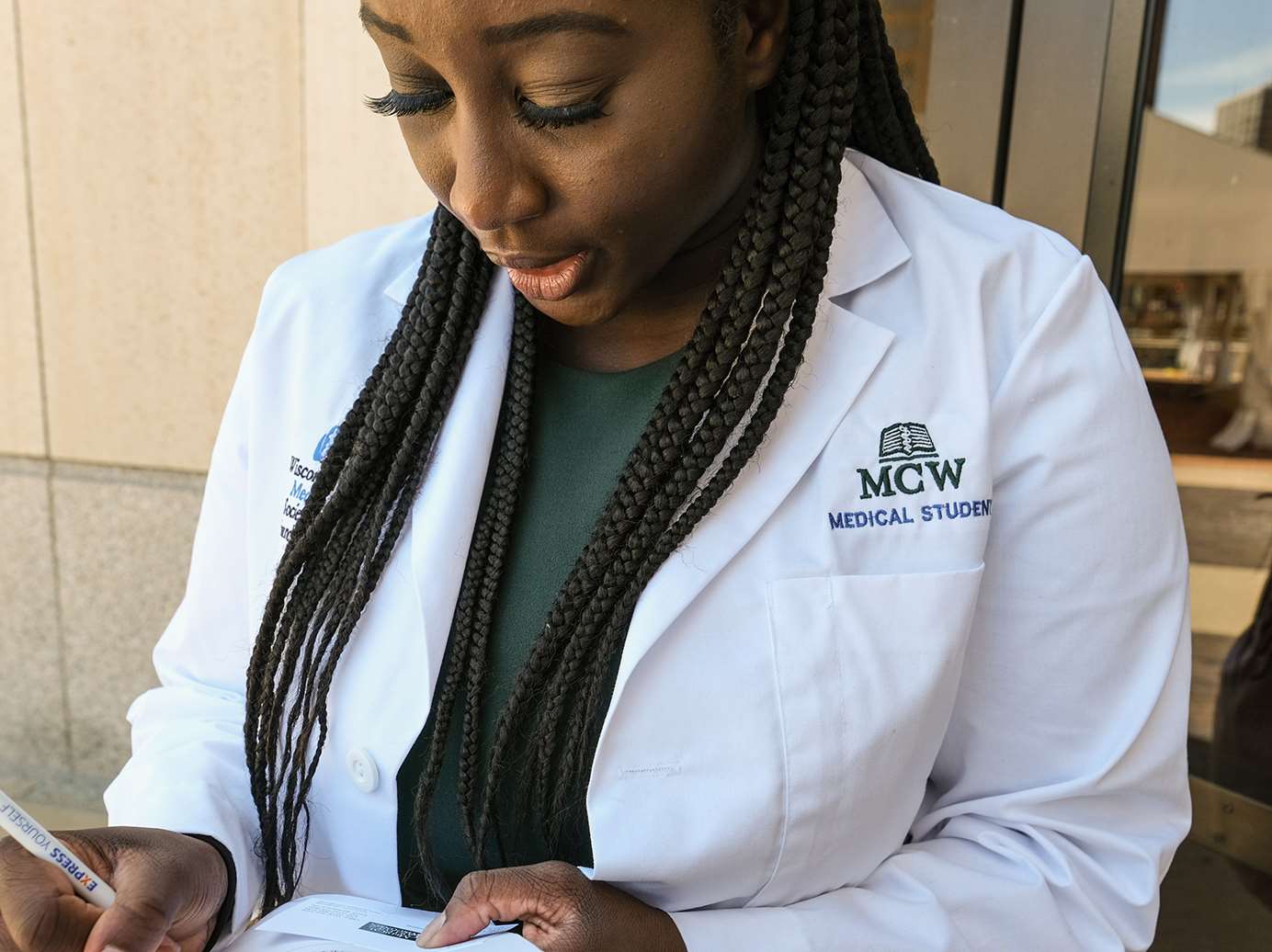