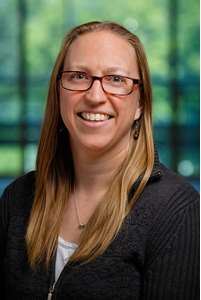 The James S. Hyde Professor of Biophysics endowment was created in recognition of Dr. Jim Hyde’s work to educate, inspire, and shape the careers of generations of scientists and inventors, as well as his achievements as a pioneer and innovator in the application of EPR instrumentation and MR technologies.

Dr. Klug will be an outstanding steward of this endowment. Her remarkable success in obtaining extramural funding in EPR will help move techniques developed at the EPR Center into new and emerging areas of structural biology.

Dr. Klug joined the MCW faculty as assistant professor of Biophysics in 2001. She was promoted to associate professor in 2005 and professor in 2012. From 2003-2019, Dr. Klug served as the training director for the National Biomedical EPR Center at MCW. She also served as associate director of the EPR Center from 2014-2015 before being appointed director in 2016 after Dr. Hyde retired.

Dr. Klug has been principal investigator of eight R01 and three S10 grants, as well as co-investigator on 11 grants, from the National Institutes of Health that support application of EPR technology to advance knowledge of important biomedical topics. Dr. Klug’s research focuses on protein structure and dynamics. Her lab uses the site-directed spin labeling EPR spectroscopy technique to study the functional dynamics of soluble and membrane proteins essential to bacterial viability. As a key member of the national and international community of EPR scientists, Dr. Klug continues to build and sustain collaborative partnerships among researchers at MCW and institutions including Vanderbilt University, Columbia University, and the University of California-Los Angeles.

Dr. Klug graduated with a Bachelor of Science degree in chemistry from Massachusetts Institute of Technology in Cambridge in 1994. She joined MCW as a research assistant, and then became an MCW graduate student, earning her Doctor of Philosophy degree in biophysics from MCW in 1999. Dr. Klug completed a postdoctoral fellowship in ophthalmic biophysical chemistry at the Jules Stein Eye Institute, University of California-Los Angeles School of Medicine, in 2001.