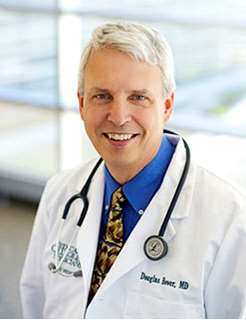 Dr. Bower began at MCW in 1992 as an assistant professor in family and community medicine. He was promoted to associate professor in 2000 and professor in 2017. Earlier this year, he retired from MCW but remained part-time and continued to teach residents in Menomonee Falls and serve on the MCW admissions committee.

For his teaching and patient care efforts, Dr. Bower has received numerous awards including the Humanism in Medicine Award from the Arnold P. Gold Foundation, Family Medicine Educator of the Year Award from the Wisconsin Academy of Family Practice and membership in the MCW Society of Teaching Scholars. He also was listed in the Best Doctors in America database.

Dr. Bower’s daughters Gina and Lisa shared this about their father:

“Maya Angelou said, ‘People will forget what you said. People will forget what you did. But people will never forget how you made them feel.’ Our dad made everyone feel so special, so important, so cared for, so fully listened to. He made people feel at ease with his inner peace, humble strength and wonderful sense of humor. The love and laughter he put into the world were contagious. His smile was steady and so genuine. His generosity of spirit was beyond compare. He would always take one moment, or as long as it took- and he would make that little difference in the life of someone he had just met or to those that were so blessed to know him well. He was kind, thoughtful and intentional. He was fun, endearingly goofy, and found joy and enjoyment in the little things. He made everyone and everything better in the most simple and effortless way.

Dr. Doug was passionate about his work in family practice medicine- providing whole-hearted compassionate patient care and sparking the same appreciation in the medical students he taught and mentored at the Medical College of Wisconsin. Even though his career was of great meaning to him and the countless people he impacted, his priorities have always been clear: keeping family as his number one. Unsurprisingly, his transition to retirement at the start of 2020 was full of grace and plans for more quality time with family and friends, wellness, and adventures-- and being a man of his word, that's exactly how he spent this past month and a half.

Even though the 66 years he was given on this earth were too short for what all of us were hoping, Doug lived a life so fully present and aligned with his values, that we consider his ‘Doug years’ to have been much longer and more impactful than typical human years. He left this world looking and feeling as vibrant, healthy and happy as he ever has been, bursting with gratitude and love.

No one can be a "perfect" person, but he came pretty darn close - or maybe it was just that he was perfect for us. Our hearts are broken wide open during this very unexpected loss, but we have moments of being able to access peace because Doug Bower was a man that lived so fully, so presently, and with no regrets. While he lived, nothing was left unsaid, nothing left unfinished . . . except that we all hoped for more time together. Our world as we knew it will never be the same. We feel my dad here with us, just in a different way, as his reach, gifts and offerings continue to unfold.”

Dr. Bower received his BS and MD from the University of Wisconsin-Madison and completed his residency in family practice in Grand Rapids.

Dr. Bower’s family will be planning a memorial service, and we will share it on InfoScope when it becomes available. The Department of Family and Community Medicine has established a memorial fund to honor Dr. Bower’s work with students, which was a passion of his, called the Douglas J. Bower, MD Memorial Fund for Family Medicine Education. Make your gift online

Dr. Bower is survived by his wife, Josie Cusma, his daughters Gina Bower and Lisa Bower and their partners Ray Pfeiffer and Jared Wishik, as well as his grandchildren Nina, Gabriel, and soon-to-be born Douglas.