Fredrik ‘Frits’ Broekhuizen, MD, a 15-year member of the Medical College of Wisconsin (MCW) Obstetrics and Gynecology faculty, died Jan. 13 at age 72. Dr. Broekhuizen retired professor emeritus from MCW in 2016 and then continued teaching as a volunteer clinical faculty member. 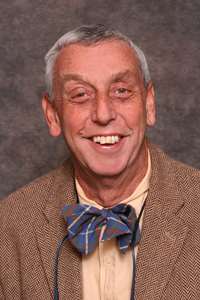 Dr. Broekhuizen started at MCW in January 2001 as full professor. Prior to joining the MCW faculty, he served for 22 years on the faculty of the University of Wisconsin School of Medicine and Public Health Milwaukee Clinical Campus at Sinai Samaritan Medical Center. During his time there, he rose to the position of Chairman of obstetrics and gynecology. From 2001 to 2015, he served as medical director of Planned Parenthood of Wisconsin.

“Dr. B was tirelessly dedicated to his work and his patients. Over the last seven years that I have known and worked with him, he continued to fight through his different illnesses and injuries so that he could return to do the things he loved to do – see patients and teach,” said Erika Peterson, MD, associate professor of obstetrics and gynecology and chief of maternal-fetal medicine. “He was so passionate about his beliefs and desires, and was such an advocate for patients, learners of all levels, and women’s health care on a national and international scale.”

Dr. Broekhuizen was a true global physician from his early days of serving the Dutch Peace Corps to the end of his career he was an educator to advance health equity from neighborhoods to nations. He incorporated global health into his academic career by advising and mentoring global health pathway students, lecturing on safe pregnancy practices, training nurse midwives in rural Ethiopia and as a consultant and teacher in partnership with Pathfinder International and the Ethiopian Ministry of Health for cervical cancer prevention. He was the global health liaison for the department of obstetrics and gynecology and served on the global health pathway advisory council.

Kathy King, MD, assistant professor of obstetrics and gynecology, has known Dr. Broekhuizen since she was a medical student at UW-Madison in 1995. In addition to serving with him on the MCW faculty, Dr. King also worked with him at Planned Parenthood of Wisconsin, and eventually succeeded him as Planned Parenthood’s medical director.

Steven Leuthner, MD, professor of pediatrics (neonatology) and bioethics, worked closely with Dr. Broekhuizen over the years and said he was a committed physician.

“Frits was instrumental in the evolution of perinatal palliative care. He was an advocate for the woman in front of him and for women over all over,” said Dr. Leuthner.

“Ask any of the innumerable residents, nurses, scrub techs, midwives, and other staff that he helped to train,” Kostich said. “Particularly in his younger years, it was painful to get corrected, or ‘Fritzified,’ as it became well-known, by Dr. B. You remembered it forever, and he was almost always right. He was generous with his time and invested it in the pursuit of education throughout his life.”

Dr. Broekhuizen is survived by Jill, his wife of more than 45 years and a classically-trained pianist, son Lodi, a musician and sound engineer, and daughter Jean, an opera singer and voice instructor. Music was always very important to Dr. Broekhuizen and his family, and one of his favorite pieces was, “To dream the impossible dream.”

“I always thought that song was so appropriate for him,” said Dr. King. “He was always striving to make the world a better place and do what others thought impossible.”