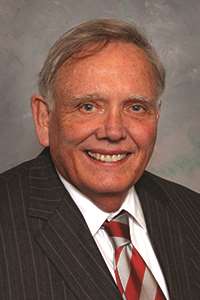 Dr. Hyde was the founding director of MCW’s Biophysics Research Institute (now the Department of Biophysics) and in 2009 was named the founding holder of The James S. Hyde Chair in Biophysics. In 1992, Dr. Hyde, MD/PhD student Eric Wong and PhD student Peter Bandettini were the first in the world to publish on fMRI of the sensorimotor system in the human brain. In 1995, he published the first paper on resting-state functional connectivity MRI, which has since been cited 6,809 times (per Scopus).

“Dr. Hyde stands as a giant in MCW’s history. His pioneering contributions to the fields of functional magnetic resonance imaging and brain connectivity have advanced the world scientific community’s ability to explore, understand and treat some of most complex neurological conditions,” said John R. Raymond, Sr., MD, MCW president and CEO.

“MCW is a world leader in the field of biophysics due in large part to the contributions by Dr. James Hyde. At MCW, he mentored students and fellows who have gone on to lead imaging and biophysics programs at such institutions as the National Institute of Mental Health, Duke University, the University of California San Diego, New Jersey Institute of Technology and the University of Wisconsin, and faculty members here at MCW,” said Joseph E. Kerschner, MD, provost, executive vice president and the Julia A. Uihlein, MA, Dean of the School of Medicine.

“Jim Hyde loved what he did at Varian Associates and at MCW. He founded what became the Biophysics Department at MCW and made it what it is today. Here, he had the best of both worlds—EPR and MRI. He was a world leader, innovator, and pioneer—a national resource in both fields. His motto was ‘You build instruments and people will use them.’ Jim’s discoveries in fMRI and functional connectivity have translational implications in areas ranging from speech pathology to diagnosis of early dementia leading to the onset of the Alzheimer’s disease,” said Balaraman Kalyanaraman, PhD, chair and professor of biophysics and the Harry R. & Angeline E. Quadracci Professor in Parkinson’s Research.

During his 41-year career at MCW (1975–2016), Dr. Hyde received more than $56 million in direct federal grant support. He authored or co-authored more than 400 scientific papers and book chapters and secured 37 patents in imaging and EPR technology.

Dr. Hyde joined MCW in 1975 as a professor of radiology and became professor of biophysics in 1992, the same year he was named director of the Biophysics Research Institute. In 1976, he was co-principal investigator (with Harold M. Swartz, MD, PhD) of the nation’s first federally funded National Biomedical Electron Paramagnetic Resonance Center; he became director of the Center in 1980 and remained in that role until his retirement. The James S. Hyde Chair in Biophysics was established at MCW in 2009. It was created primarily through the support of Dr. Hyde’s associates affiliated with Medical Advances Inc., a biotechnology company he co-founded that is now a part of Philips Healthcare, a sector of Royal Philips Electronics, based in the Netherlands.

His honors include an honorary doctorate degree from Jagiellonian University in Poland, the Bruker Prize from the Royal Society of Chemistry in the United Kingdom, gold medals from both the International EPR (ESR) Society and the International Society for Magnetic Resonance in Medicine, and the Massachusetts Institute of Technology Club of Wisconsin’s Annual Technology Achievement Award. He is the recipient of MCW’s T. Michael Bolger Award and the Distinguished Service Award, the highest honor for an MCW faculty or staff member.

A native of South Dakota, Dr. Hyde received both his Bachelor of Science degree and PhD in physics from the Massachusetts Institute of Technology.

He is survived by his wife, Karen, and children, Sarah, Elizabeth, and David. Funeral services for Dr. Hyde will be held on Saturday, August 20, at 2:00 p.m. at St. Mary’s Episcopal Church, 36014 Sunset Drive in Dousman, Wisconsin.