Every Friday afternoon nearly 20 researchers at the Medical College of Wisconsin (MCW) – from basic scientists who work at the laboratory bench to clinician-scientists who treat patients at the bedside – gather around a conference room table for an important meeting. The meeting is supposed to last an hour, but it often stretches much longer as these faculty members excitedly share their latest research developments and ideas regarding one goal: fighting breast cancer.

The collective brainpower of these individuals – MCW's Breast Cancer Biology Research Group – is paying off in the form of new collaborations and advances. "We're in a stronger place at MCW than ever before," says Carol Williams, PhD, the Kathleen M. Duffey Fogarty Eminent Scholar in Breast Cancer Research and professor of pharmacology and toxicology, who co-directs the Research Group. "By meeting every Friday, we discovered that many of our labs were studying pathways that might help breast cancer cells become resistant to therapy. That made us realize we may have really great insight into how we can stop those tumor cells from becoming resistant and develop totally new approaches to better therapies. The whole is greater than the sum of its parts."

The researchers, as a group, recently applied for a $10 million National Cancer Institute grant to continue their synergistic study of estrogen-receptor-positive (ER-positive) tumors – a type of breast cancer that often responds well to treatment initially but later can return using different biochemical pathways to grow. "The collaborative project will really expand our ability to profile the molecular features of ER-positive breast cancer, which is the most common type, as well as to find better ways to treat it," says Hallgeir Rui, MD, PhD, the Wisconsin Breast Cancer Showhouse Endowed Professor of Breast Cancer Research, associate director of basic science and shared resources for the MCW Cancer Center, and co-director of the Breast Cancer Research Group. "We want to use some very novel breast cancer experimental models and also a large set of clinical breast cancer specimens to overcome therapy resistance, which is a quite common occurrence and remains a major clinical problem." What MCW researchers learn about the biochemical pathways in ER-positive tumors could apply to many other types of cancers, including the hard-to-treat triple-negative breast cancer and cancers outside of the breast. "All of the pathways we're studying have a strong role, not only in promoting development and progression of breast cancer, but promoting aggressive progression of lung cancer, prostate cancer and pancreatic cancer – and we're seeing strong overlap in our ability to target these important growth pathways," Dr. Williams explains.

Dr. Rui also has been impressed by the philanthropic support of the local community, including the Wisconsin Breast Cancer Showhouse, which also supports prostate cancer.

"That's quite unique to Milwaukee…I've never seen such level of involvement by grassroots local organizations to support research," he says. "That was another key factor that attracted me to MCW."

MCW's researchers also benefit from unique resources. With the help of a Komen Promise Grant, Dr. Rui's lab has collected nearly 3,000 breast tumor specimens from patients. MCW is one of only a few centers around the world to have access to a collection of that magnitude. "We're able to look at proteins expressed in tumors so we can predict which tumors will respond to certain drugs and help match the right patient with the right drugs," Dr. Rui explains. 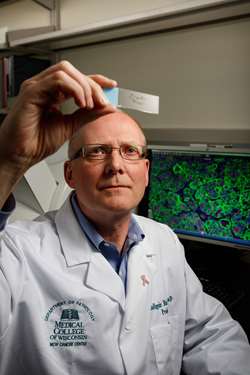 The Breast Cancer Biology Research Group also is bolstered by a multidisciplinary team of experts, including clinician-scientists, biostatisticians and cancer biologists. "We have such a variety of expertise in so many different areas, and that really is allowing us to be very creative in our hypotheses and testing," Dr. Williams shares.

"I love MCW for the opportunity it gives me to do really basic cancer biology research, but at the same time, make my research translational – with a real focus on making biomedical breakthroughs and finding new approaches to treating breast cancer," Dr. Williams says. "Part of that arises from our close association with Froedtert Hospital. We have access to patients, and we're able to collaborate with the clinicians who are treating those patients, so that increases the bench-to-bedside translation. Important breast cancer specimens are provided by breast surgeons and pathologists, including Amanda Kong, Tina Yen, Alonso Walker and Irene Aguilera-Barrantes. The clinician collaborators help keep us focused on the most pressing questions and what we should be pursuing."

Although the road from bench to bedside can be a long one, MCW's researchers are making significant progress. Dr. Rui's lab recently genetically engineered a mouse hormone profile that much more closely resembles the hormone profile of women, which is key to better understanding growth and responsiveness of hormone receptor-positive breast cancer to various treatments.

"We have developed some intriguing, first-in-the-world metastasizing models in mice that recapitulate disease progression in human patients," he says. "Now we can, for the first time, explore cures for metastases in this most common type of ER-positive tumor."

Later in 2017, Dr. Bergom and fellow clinical oncologist Lubna Chaudhary, MD, will lead a clinical trial that will apply the same analytic methods used in the lab to find leads that could help patients overcome drug resistance. The initial study of 39 patients will examine the molecular profiles of tumors before treatment and then after one month of anti-estrogen hormone treatment. Patients whose tumors show signs of treatment resistance could be given an alternative drug. "We hope this initial study will really lay the groundwork for a larger, randomized trial where we can test specific drugs – but already from this initial trial we may be able to help guide patient therapy," Dr. Rui says.

Another promising area of research is immune-based therapy, which involves mobilizing the immune system of patients to attack cancer cells. "Cancer drugs are going to continue to be helpful, but in the end, the immune system needs to finish the job," Dr. Rui notes. "While drugs can be used to shrink the tumor, if we can get the immune systems of patients to kill the cancer cells, that would be very important. We have some leads along those lines and some very novel data we hope to publish soon that indicates that one of those immune-suppressing molecules is expressed in certain breast cancers." The next step would be to test immune-based therapy in patients who have high levels of immune-suppressing molecules in their tumors. 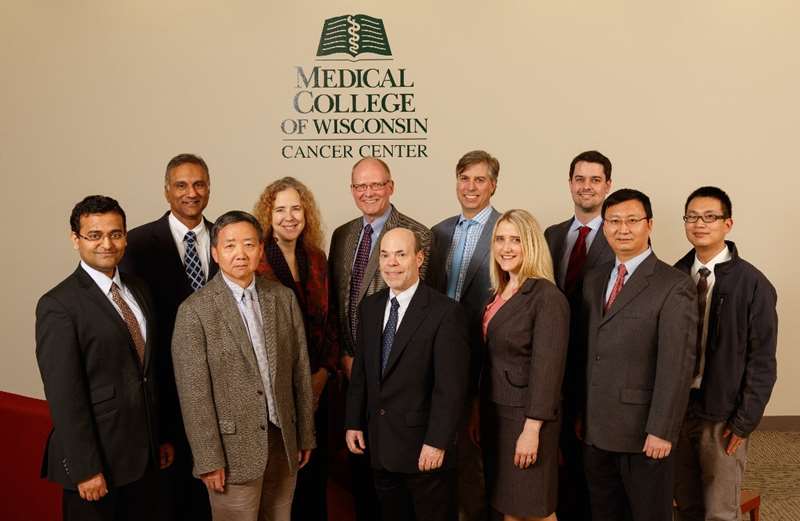 A hallway conversation about shared research interests led to a new collaboration between Dr. Williams and Mark McNally, PhD, associate professor of microbiology and molecular genetics at MCW. Dr. Williams' lab discovered that tumor cells have higher levels of a protein called SmgGDS, which seems to be key to the spread of cancer cells throughout the body. "When we stopped the production of the protein, we found the cancer cells had less growth, which means that the cancer cells depend on SmgGDS to grow. This discovery identifies SmgGDS as a very exciting target for therapy," she says.

Her lab then found that RNA splicing generates two SmgGDS forms and discovered that cancer cells need both forms to grow and metastasize. As it turns out, Dr. McNally is an expert in RNA splicing. He and Dr. Williams now have industry support to find a drug that can alter the splicing of SmgGDS. "We have some compounds that seem to be working extremely well at stopping the growth of human breast cancer cells in the petri dish. The next step is to test them in preclinical models and eventually in a clinical trial," Dr. Williams shares. "It's a wonderful story about how communication and collaboration can aid in the advancement of scientific discoveries."

The role of health disparities

Meanwhile, other MCW researchers are studying breast cancer from a population health perspective. Ann B. Nattinger, MD, MPH, MACP, MCW's senior associate dean for research and the Lady Riders Professor of Breast Cancer Research, has spent much of her career researching how health disparities affect screening and treatment in breast cancer. Health disparities are particularly a problem in Milwaukee.

"There's a huge disparity in cancer survival between poorer people and wealthier ones. If you have breast cancer and you're poor, you're about twice as likely to die in the first five years after you're diagnosed," says Dr. Nattinger, who is the immediate past director of the Center for Patient Care and Outcomes Research. "My work is trying to figure out why there is this huge disparity among survival rates, even if you control for stage of disease. Then once we know that, we envision moving to intervention to influence the situation."

Dr. Nattinger is analyzing large national databases to identify the possible causes of disparities, including whether lower-income patients don't receive treatments of higher quality, or don't finish their treatments. "Everyone who needs surgery gets operated on. But some people who are supposed to take hormonal pills for a minimum of five years after treatment may not be able to afford them," she says. "Then there's the question of other illnesses. Maybe poorer women have diabetes or heart disease or other illnesses that affect cancer outcomes."

Other MCW researchers examining breast cancer disparities include Melinda Stolley, PhD, associate director of prevention and control for the MCW Cancer Center, who is looking at the possible role of obesity, and Joan Neuner, MD, MPH, an associate professor of medicine who is studying the impact of the cost of hormonal treatments and "pharmacy deserts," which are communities that don't have access to a nearby pharmacy. They are among the 10 researchers involved in MCW's Population Sciences Breast Cancer Research Group, which also meets weekly.

Together, MCW's researchers are poised to make a major impact on future breast cancer care.

"It is exciting," Dr. Rui says. "Already, the Froedtert & Medical College of Wisconsin health network is advanced in cancer therapy and cancer diagnosis, but we really could be a major leader in this field. We have great ambitions and great belief in the work we’re doing."

MCW faculty members from a variety of disciplines are engaged in breast cancer research. They include: