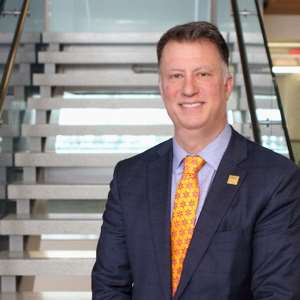 Milwaukee, Nov. 14, 2019 – Joseph E. Kerschner, MD, dean of the School of Medicine and executive vice president and provost of the Medical College of Wisconsin (MCW), has been named the new chair of the Association of American Medical Colleges (AAMC) board of directors.

Dr. Kerschner became the dean of the school of medicine and executive vice president of MCW in November 2011 following 10 months as interim dean. He assumed the additional role of provost in 2017 and also serves as professor in the departments of otolaryngology and communication sciences and microbiology and immunology.

In addition to his administrative roles, Dr. Kerschner maintains an active research laboratory focused on the causes of and potential new treatments for ear infections. He previously served as chair of the AAMC Council of Deans. Dr. Kerschner maintains active membership on numerous professional and honorary societies, is past president of the American Society of Pediatric Otolaryngology and immediate past president of the International Society for Otitis Media.