The quest to ease the pain of sickle cell disease

Milwaukee, June 20, 2017 – High school senior Andreau Dorsey has endured complications from her sickle cell anemia since birth, but it was in middle school that the regular pain hit. The sickle cell-related pain most often strikes her knee, at least weekly – and sometimes daily. "It's a sharp, throbbing pain," says Dorsey, 18. "It fluctuates and is highly affected by how I move, so I've tried to do things that make it hurt less. I've always had to be conscious of not overworking myself and doing as much as other kids. I used to take pain medication a lot, but I don’t want to be popping pills all the time, so I will immediately resort to putting heat on it and rest, and only take medicine if that doesn't work."

One of the doctors in the sickle cell clinic at Children's Hospital of Wisconsin where Dorsey receives care is Amanda Brandow, DO, MS, associate professor of pediatrics at the Medical College of Wisconsin who researches sickle cell pain.

Patients such as Dorsey motivate Dr. Brandow and her colleague, Cheryl Stucky, PhD, Professor of Cell Biology, Neurobiology and Anatomy at MCW to search for better therapies for sickle cell pain. Sickle cell disease affects an estimated 90,000 to 100,000 Americans, according to the Centers for Disease Control and Prevention, but worldwide it affects millions. It is more common among individuals of African descent.

"Sickle cell disease causes the red blood cells to change from disc-shaped to half-moon shape. Compared to normal shaped red blood cells which are flexible 'tubes' that move easily through capillaries, sickle cells are very rigid so they can obstruct blood flow at various points of the body. For decades, people felt that the pain was related to that decreased blood flow," Dr. Brandow explains.

"Through improved understanding about the epidemiology of sickle cell pain, we have learned that sickle cell pain transitions from acute, intermittent pain to chronic pain with age and we have learned that the biology of sickle cell pain likely stems from abnormalities in the nervous system that can be key drivers of the pain, completely independent of the red blood cell sickling. We think having this chronic, destructive pain since birth can contribute to a remodeling of their nervous system," Dr. Brandow says.

It's essential that MCW continue to support, fund and advance research on sickle cell pain because the disease is under-researched and underfunded, lacks effective treatments, and primarily affects an underrepresented population, Dr. Stucky notes. "Historically, the pain research community has not appreciated that patients with sickle cell disease have very severe pain. These patients are often under the radar and do not have organized groups lobbying for research and visibility, and that’s why I think it's such an important disease to work on," she says.

By measuring pain in patients while conducting parallel studies in the lab, Drs. Stucky and Brandow have made key discoveries about the mechanisms that drive the severe pain associated with sickle cell disease. Their findings could also help the 100 million American adults who suffer from other types of chronic pain such as back or joint pain. Chronic pain is a problem that costs as much as $635 billion a year, according to the American Academy of Pain Medicine. This cost of pain is greater than that of cancer, heart disease and diabetes all combined. "Our ultimate goal is to find a novel therapy for sickle cell pain and to advance our understanding of other prevalent types of pain," says Dr. Brandow.

Pain management is key for patients living with sickle cell disease. "The most common complication is severe, acute and chronic pain, and it can send patients to the emergency room several times a year or more. And more and more data has revealed that those patients are suffering from pain when they're at home," Dr. Brandow notes. "Many patients suffer from chronic pain daily, which affects their ability to work and go to school. Unfortunately, we have very few treatments for pain in sickle cell disease. The only treatment we have is intravenous (IV) opioids, and we have made no strides in finding novel therapeutic targets since the disease was discovered in 1910."

Patients with sickle cell disease most often feel pain in their arms, legs, back, abdomen and chest. "With the acute pain, it's just that. They are fine one day, and then suddenly they have acute onset of severe, debilitating pain, and often no matter what they do at home, it doesn't help and the pain persists and/or worsens," Dr. Brandow explains. "The oral morphine they have at home doesn't help thus they seek care in the emergency department. It is not uncommon for patients to require two, three or four doses of IV morphine, back to back, just to get their pain under control."

An acute pain episode can be precipitated by no known factor or triggered by an infection or a temperature change. Many children with sickle cell disease experience painful episodes after swimming and some patients anecdotally report air conditioning can cause an acute pain episode. Wisconsin winters are particularly difficult for patients with this condition. "We don’t like our pediatric patients to stand at bus stops or play outside in the winter as parents report this often exacerbates their child's pain," Dr. Brandow says.

As patients get older, the pain often transitions into chronic, daily pain and is still punctuated by episodes of severe pain. "Some of our older teens and adults have daily chronic pain, and they need to take daily opioids just to get through the day," she says.

The national opioid overdose epidemic has made things even worse. Deaths from opioids have quadrupled since 1999, and in Wisconsin in 2015, there were more deaths from prescription opioids than from vehicle accidents. As a result, hospital staff can sometimes doubt and dismiss sickle cell patients who come to the ER seeking relief from debilitating pain. "Unfortunately, because of discrimination, I think our patients can be mistreated when they go into hospitals for pain treatment. They sometimes get labeled very incorrectly as drug-seekers," notes Dr. Brandow.

Understanding patients' experiences has been critical to Dr. Stucky's work in the lab. "Dr. Brandow and I work together very closely to investigate pain, and that has been golden for me because I need to be able to understand what the patients feel, how they describe their pain, where is it coming from," Dr. Stucky says. "What I really like is the parallel studies that we can do. We can go from getting clues from the patients to studying in mouse models – and then hopefully go back to patients."

It was Cheryl Hillery, MD, a vascular hematologist and former MCW faculty member, who first got Dr. Stucky interested in sickle cell research. "She and I were talking, and she said, 'These patients with sickle cell have terrible pain, and nobody understands why and what’s causing it,'" Dr. Stucky recalls. Soon, the pair was collaborating on research.

That kind of partnership, between clinicians and basic scientists, is key to scientific breakthroughs, Dr. Stucky notes.

"It starts with two people who are really good at their respective areas thinking about a logical clinical bridge between those two areas. That's something that I'm really proud of doing, and it's something I think more people should do," Dr. Stucky says. "The MCW culture makes it so easy to collaborate, and it's not like that everywhere else. MCW is a unique place to do translational research because of the close relationships possible between basic scientists and clinicians."

Drs. Stucky and Brandow started working together in 2010, and have since collaborated on several papers. Their research has been funded by the National Institute for Neurological Disorders and Stroke, National Heart, Lung and Blood Institute, the American Society of Hematology, the MACC Fund and Children’s Research Institute.

"The strong collaboration I have with Dr. Stucky and her basic science lab to make this work translational is a huge strength. We meet regularly to think of new ideas. It really is bench-to-bedside and bedside-to-bench, and I think that bidirectional research really enhances our ability to study pain," Dr. Brandow says. "There are very few groups in the country that are studying sickle cell pain to the depth that we are here with a true translational model."

MCW researchers also benefit from a large local patient population – about 350 children and 600 adult patients with sickle cell disease – which allows scientists to study the disease across the life span, Dr. Brandow notes.

New findings in the biology of pain

Pain is difficult to study: it's self-reported, there is no objective measure and it involves complex neurocircuitry throughout the body. Pain disorders can include pain stemming from inflammation, which can sensitize neurotransmitters, or neuropathic pain, which results from nerve damage. Sickle cell disease involves both.

"There are a lot of questions about pain we don't understand yet," Dr. Stucky says. "One of the things we don't understand is why two patients can have the same disorder or injury and yet display pain that is very different. One of these may have pain that resolves very quickly, whereas the other patient will develop long-term chronic pain that severely affects their quality of life. This difference may be because of genetic or epigenetic differences, biopsychosocial differences, or stress levels. Stress levels definitely affect the development of chronic pain."

Nonetheless, MCW researchers are making progress in understanding the role of pain in sickle cell disease. Instead of simply asking whether patients have pain, Dr. Brandow has started to ask questions like, "Is it sharp? Is it shooting? Does it radiate? Does cold, heat or light touch exacerbate pain?" The questions are designed to get at the characteristics of patients' pain to determine if it is neuropathic. "If it is neuropathic pain, it will likely respond to a different class of drugs," she says.

The search for new treatments

Research on other diseases has shown that certain drugs used to treat seizures and depression can be helpful for neuropathic pain, and that might be something to test with a clinical trial of sickle cell disease patients in the future, Dr. Brandow says.

And there are other possibilities. Through their collaboration, Drs. Stucky and Brandow discovered that a pain neurotransmitter called Substance P is elevated in both patients and mice with sickle cell disease. Signaling molecules called chemokines are increased in both populations, amplifying the body's pain response.

A current clinical trial for osteoporosis is testing a blocker of a chemokine receptor to see if it improves patients' pain. "If that trial shows that it's safe and effective for treating osteoporosis, then we think it might be possible to repurpose it for patients with sickle cell disease," Dr. Stucky says. "It could happen within five years because the compound has already gone through safety trials for a different pain disorder, so it would be faster than starting out with novel targets."

Because pain research is so complex and FDA regulations have set such a high bar, many big pharmaceutical companies have stopped developing new pain medications. That makes the role of academic medicine all the more important to continue to fund and support," Dr. Stucky says.

Meanwhile, Dorsey is glad to see that the sickle cell disease physicians and other researchers are working to better understand sickle cell disease, which also affects her older sister. "I think there are a lot of misconceptions about people with this disease since you can't really prove that you're having the pain," Dorsey says. "I think sometimes hospital staff assume people are just there to get a morphine drip. This disease can get misunderstood a lot, and it's important to expand what is known about sickle cell disease so we can help more people." 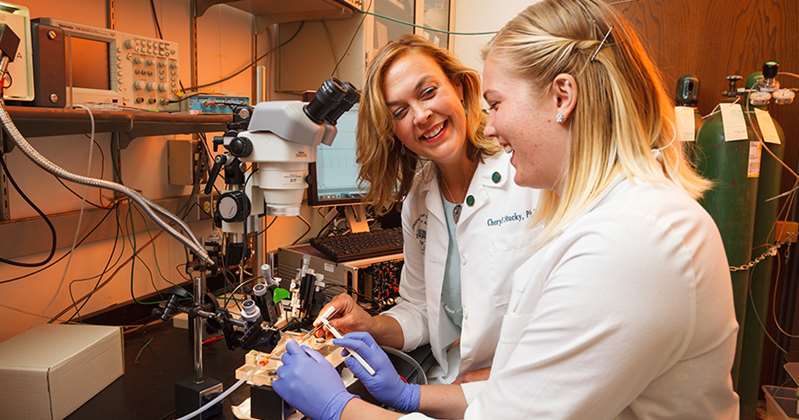 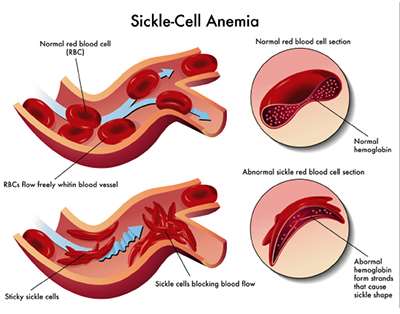