Dr. Girotti received his Bachelor of Science degree in Biology from Massachusetts Institute of Technology in 1959 and his Doctorate degree in Biochemistry from the University of Massachusetts, Amherst in 1965. He was a Postdoctoral Research Associate at Cornell University Medical College (1965-1968) where he investigated the role of metal ions in ribonuclease activity. Dr. Girotti joined the faculty of the Biochemistry Department at the Medical College of Wisconsin in 1968. 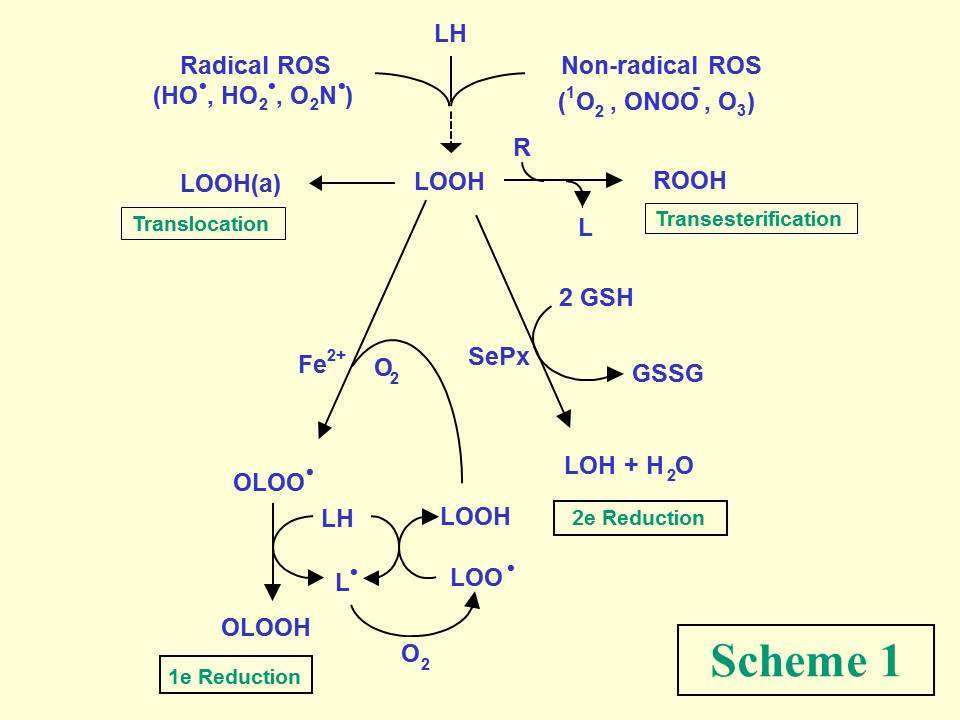 Among the many intermediates/products of lipid peroxidation, hydroperoxide species (LOOHs) are of special interest because of their relatively long lifetimes compared with free radical precursors or products. Under redox-constrained conditions, LOOHs can accumulate steadily with stress duration and may perturb membrane structure/function because of their relatively polar nature. However, in the presence of reductants and catalytic iron, LOOHs can undergo one-electron reduction with formation of oxyl (LO·) and epoxyallylic peroxyl (OLOO·) radicals, which exacerbate membrane damage by triggering chain peroxidation reactions (Scheme 1). Counteracting this is two-electron reductive detoxification catalyzed, for example, by glutathione-dependent selenoperoxidases, GPx4 (also known as PHGPx) being the most prominent isotype. Other LOOH pathways include inter-lipid transesterification and inter-membrane or membrane-lipoprotein translocation.

The Girotti group specializes in LOOH formation, turnover, and redox signaling activity, the latter currently attracting widespread biological and biomedical interest. Relatively low LOOH pressure may signal for upregulation of antioxidant proteins and activation of pro-growth transcription factors, whereas high LOOH pressure can signal for growth cessation and programmed cell death (apoptosis). Ongoing projects in the Girotti laboratory include the following: (a) Selenoperoxidase-mediated LOOH metabolism and how this modulates the pathologic as well as therapeutic effects of oxidative stress - as in antitumor photodynamic therapy (PDT), for example; (b) the biological ramifications of spontaneous or transfer protein-facilitated LOOH translocation between membranes or membranes and lipoproteins; pioneering studies of this phenomenon were carried out in the Girotti laboratory; (c) Protective effects of nitric oxide (NO) against cancer cell killing by PDT. Depending on its generation rate and location in cells, nitric oxide synthase (NOS)-derived NO can either be cytotoxic or cytoprotective (Scheme 2). In the latter category, our work has revealed that NO can (i) scavenge lipid-derived free radicals, (ii) induce antioxidant proteins such as heme oxygenase-1 and ferritin, or (iii) engage pro-survival/pro-growth signaling pathways that can compromise the effectiveness of PDT. 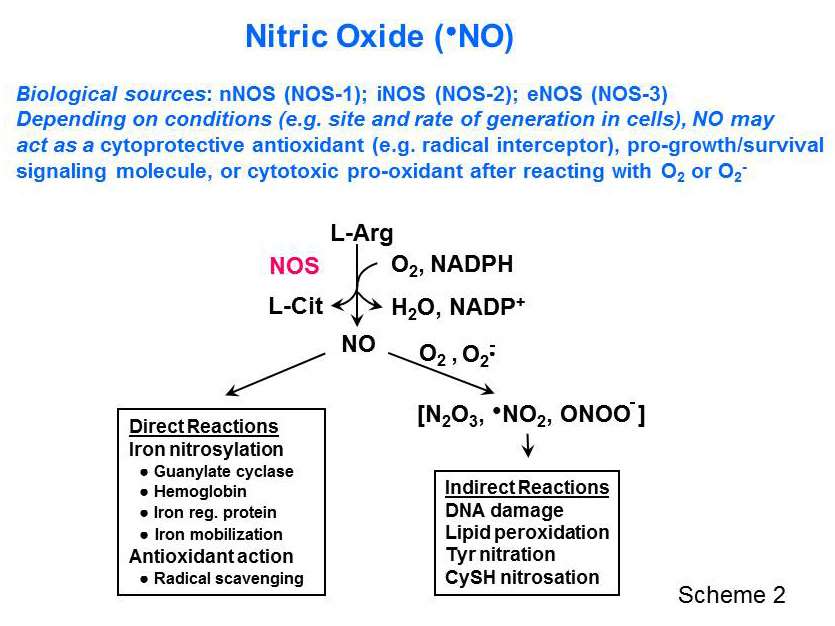