Dr. Misra obtained his Bachelor of Arts degree in Microbiology from Rutgers College in New Jersey in 1979 and his Doctorate degree in Biochemistry from New York University School of Medicine in 1988. He was a Postdoctoral Research Fellow at Harvard Medical School where he studied the molecular control of growth factor induced transcriptional regulation of the c-Fos proto-oncogene. Dr. Misra joined the faculty of the Biochemistry Department at the Medical College of Wisconsin in 1993.

One of the overall objectives of our research is to elucidate underlying molecular mechanisms involved in cardiac function and heart formation. Congenital cardiovascular anomalies are the most common form of human birth defect with a recorded instance of 1 per 200 live births per year in North America. There is therefore considerable interest in understanding the molecular and genetic bases of these diseases. Underlying congenital heart defects is the complexity of cardiovascular development. Proper heart development requires the precise expression at the temporal and spatial level of a complex cast of structural and regulatory proteins. Alterations in either the function of these proteins, their time or location of expression, or their abundance relative to other critical proteins can have drastic consequences for cardiac development ranging from embryonic lethality to functional malformations of the heart that can lead to significant cardiomyopathies. 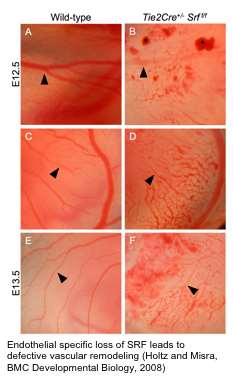 One way in which proteins can be become misexpressed is by aberrant regulation Misra Image 1of expression of the genes that encode them. It is therefore important to understand the mechanisms that regulate normal expression of these proteins during formation of the heart. However, due to the significant limitations of the current technologies used to study embryonic gene regulation and protein function this has been difficult to address. In our studies we are using a novel sophisticated mouse transgenic approach to study the molecular mechanisms involved in controlling regulation of a transcriptional regulatory protein, the serum response factor (SRF).

Serum response factor (SRF), is a highly evolutionarily conserved member of the MADS (MCM1, Agamous and Deficiens, SRF) box family of transcription factors, that is a critical regulator of cardiac development and function. SRF regulates various cardiac and skeletal muscle specific genes necessary for normal heart development and function, including the cardiac and skeletal actin, dystrophin, myosin light chain, and atrial natriuretic peptide genes. Consistent with this, cardiac specific overexpression of SRF in transgenic animals results in reinduction of an embryonic program of gene expression that can lead to dramatic cardiac hypertrophic and myopathic phenotypes that mimic those observed during the initial development of congestive heart failure in humans. Cardiac specific loss of SRF leads to embryonic death due to vascular insufficiency, and consistent with this we have shown that in cardiomyocytes SRF is an essential coordinator of cardiomyocyte function due to its ability to regulate expression of numerous genes involved in multiple and disparate levels of sarcomeric function and assembly.

A major focus of our lab is to understand the genetic regulation of coronary vascular development. We and others have shown that SRF is important for vascular Misra Image 2development and function in the heart. SRF plays a critical role in vascular smooth muscle gene expression and function. 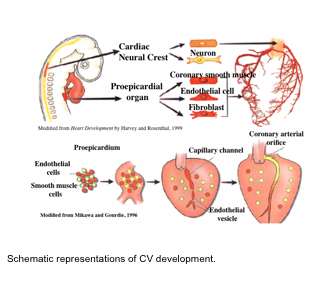 We have also shown SRF is important for endothelial cell function and that endothelial specific loss of SRF disrupts vascular remodeling. In higher vertebrates, development of the coronary vascular (CV) system is dependent on a group of multipotent cells located in the proepicardium (PE). The PE is a transient embryonic structure located just below the developing A/V canal of the early heart. The PE is of central importance in CV development. Genetic labeling experiments in avian systems have established that this generative tissue contributes to all the vascular cells of the heart. In mouse, at around embryonic day (ED) 9.5 cells from the PE undergo an epithelial/mesenchymal-like transformation and migrate to invest the surface of the heart and form the epicardium. Epicardial-derived cells subsequently diversify into subepicardial mesenchymal cells (SEMCs), from which arises the cardiac fibroblasts, pericytes, as well as the endothelial and smooth muscle cells that comprise the coronary vasculature. A significant amount of work in avian systems has established the central importance of the PE for CV development. However, largely due to a lack of definitive PE specific markers and the relatively diminutive size and transient nature of the PE, there still remains much to be understood about how PE cells ultimately form the CV. An outstanding question that has direct therapeutic implication, is whether the PE can serve as an efficacious source of cells to effect directed vascular repair after cardiac injury. 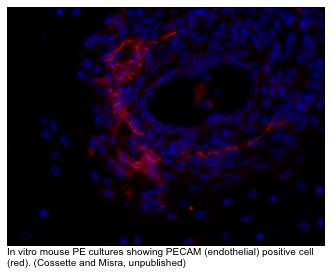 In my laboratory we have recently begun to address the function of the PE in CV development in mouse model systems by establishing genetic tools that can be used to elucidate the function of subsets of PE-derived vascular cells. Notably, we have identified an evolutionarily conserved DNA enhancer element, termed the PE enhancer (ePE), which confers a vasculogenic expression pattern to reporter genes.