Dr. Twining received her Doctorate degree in Physiological Chemistry from Ohio State University. She did postdoctoral work at the Mayo Clinic in immunochemistry and at the Medical College of Wisconsin in proteinase activation.

The cornea has two major functions; refraction of light and protection of the eye. 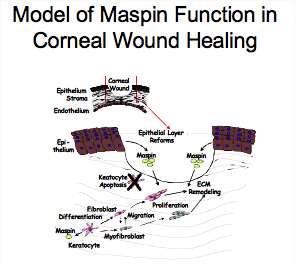 Retention of the avascularity and transparency of the cornea is crucial for vision. Understanding the mechanism of normal and abnormal corneal wound healing is important because of the approximately 1 million refractive surgeries such as LASIK performed each year in the US. Upon wounding, the external barrier of the cornea is reassembled through the movement of the epithelial cells from the non-injured regions of the cornea followed by cell division and stratification of the epithelial layer. In the stroma, the cells near the injury undergo apoptosis. Cells more distant from the wound divide and undergo a phenotypic change to form mobile fibroblasts and with time the formation of contractile myofibroblasts. The fibroblasts and myofibroblasts remodel the stromal area of apoptosis. With time this area is repopulated with the quiescent normal keratocytes. In humans, this process can continue for at least 7-10 years.

Our previous work showed that prothrombin, the precursor of the coagulation protease thrombin, is both found within corneal epithelial, stromal and endothelial cells and associated with the extracellular matrix of the stroma. Not only is prothrombin present but also its mRNA. In addition to prothrombin, the message and protein for the other coagulation factors of the intrinsic and extrinsic pathways are found in the cornea. During wound healing, cornea synthesized thrombin, the last protease of the coagulation pathway, is activated by coagulation factors synthesized by the corneal epithelial and stromal cells. Fibrinogen is converted to fibrin and deposited on the surface of the injured cornea and within the stromal matrix. The roles of thrombin, in addition to cleavage of fibrinogen to fibrin, in corneal wound healing are being explored. One of these is cleavage of protease activated receptors, PARs, revealing a cryptic ligand. Upon binding this ligand to the PAR binding site, multiple signaling pathways are activated. These pathways can regulate processes such as cell proliferation, adhesion and migration and can modify gene expression. The effect of thrombin on proteases in the plasminogen activator system, members of the CCN family of proteins, Cyr61 and CTGF, as well as, other growth factors and chemokines are being explored in corneal cells.

One of the major causes of corneal ulceration is bacterial keratitis. Bacteria invasion of host tissues requires proteases that degrade host tissues. Pseudomonas aeruginosa is of specific concern because it colonizes on soft contact lenses. This organism produces a number of secreted factors that alter host functions including the protease Pseudomonas elastase. There are two forms of this enzyme but the functional implications of these differences are not known and are the focus of our studies.

Maspin is a non-inhibitory member of the Serpin (SERpin Protease INhibitor) family which is synthesized by epithelial and endothelial cells and stromal keratocytes in the normal cornea. It stimulates adhesion of cells to extracellular matrix molecules and inhibits migration and invasion of cells including corneal stromal fibroblasts and carcinoma cells. In addition, maspin inhibits angiogenesis though inhibition of vascular endothelial cell proliferation and migration. Our previous work showed that the reactive site loop peptide is sufficient for stimulation of adhesion, inhibition of migration and invasion. Our model of maspin function in the cornea includes regulation of migration of corneal cells through downregulation of maspin synthesis in the stromal fibroblast and myofibroblast phenotypes which allows migration of these cells into the wounded area. Downregulation of maspin synthesis by stromal fibroblasts and myofibroblasts involves DNA and histone methylation in the CpG islands in the promoter. We hypothesize that maspin released by the intact epithelial layer above the wounded cornea inhibits migration of the cells as they repopulate the wounded area. Corneal epithelial cells release maspin through non-classical mechanisms; exosomes and cell death. This released maspin is post-translationally phosphorylated at one or more of eight serine and threonine residues. The functional implications of phosphorylation of maspin is being explored as well as characterization of the locations of phosphorylation on intracellular maspin.