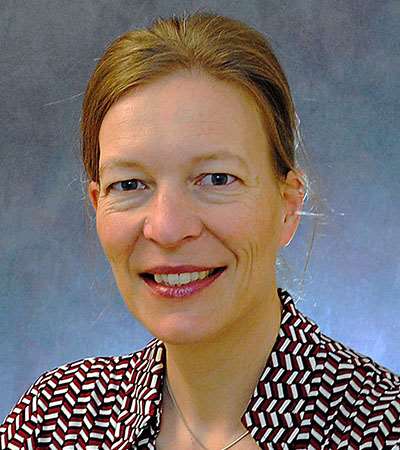 Dr. Stucke has been with the Medical College of Wisconsin since 1999. She received her Medical Doctorate from the University of Heidelberg, Germany, and began residency training in Anesthesiology. In 1999, she moved to Milwaukee for a postdoctoral fellowship in the Department of Anesthesiology where she joined the group of Dr. Edward Zuperku and Dr. Eckehard Stuth. The interest of the group lies in "Central Control of Breathing." An in vivo model using the anesthetized or decerebrate dog is used to perform extracellular recordings of single cells and drug ejection onto these cells as well as nuclear injections in the respiratory regions of the brainstem. So far, neurons in the preBötzinger Complex, the caudal ventral respiratory group and the hypoglossal motor nucleus have been investigated. This work has been supported by several NIH grants and VA merit grants. Dr. Stucke's focus has been on the effects of volatile anesthetics on neurotransmission in respiratory premotor neurons as well as the effects of clinically relevant opioid concentrations on these neurons.

In the last year Dr. Stucke has changed the direction of her research to the effects of hypoxia in immature mammals. The study uses neonatal and young rabbits and investigates the mechanisms of hypoxic ventilatory depression, and especially the effects of anesthesia on animals at different ages.

In the meantime, Dr. Stucke has completed her residency in Anesthesiology and a fellowship in Pediatric Anesthesia, both at the Medical College of Wisconsin. She is now a staff anesthesiologist at Children's Wisconsin and divides her time between the operating room and the research laboratory.