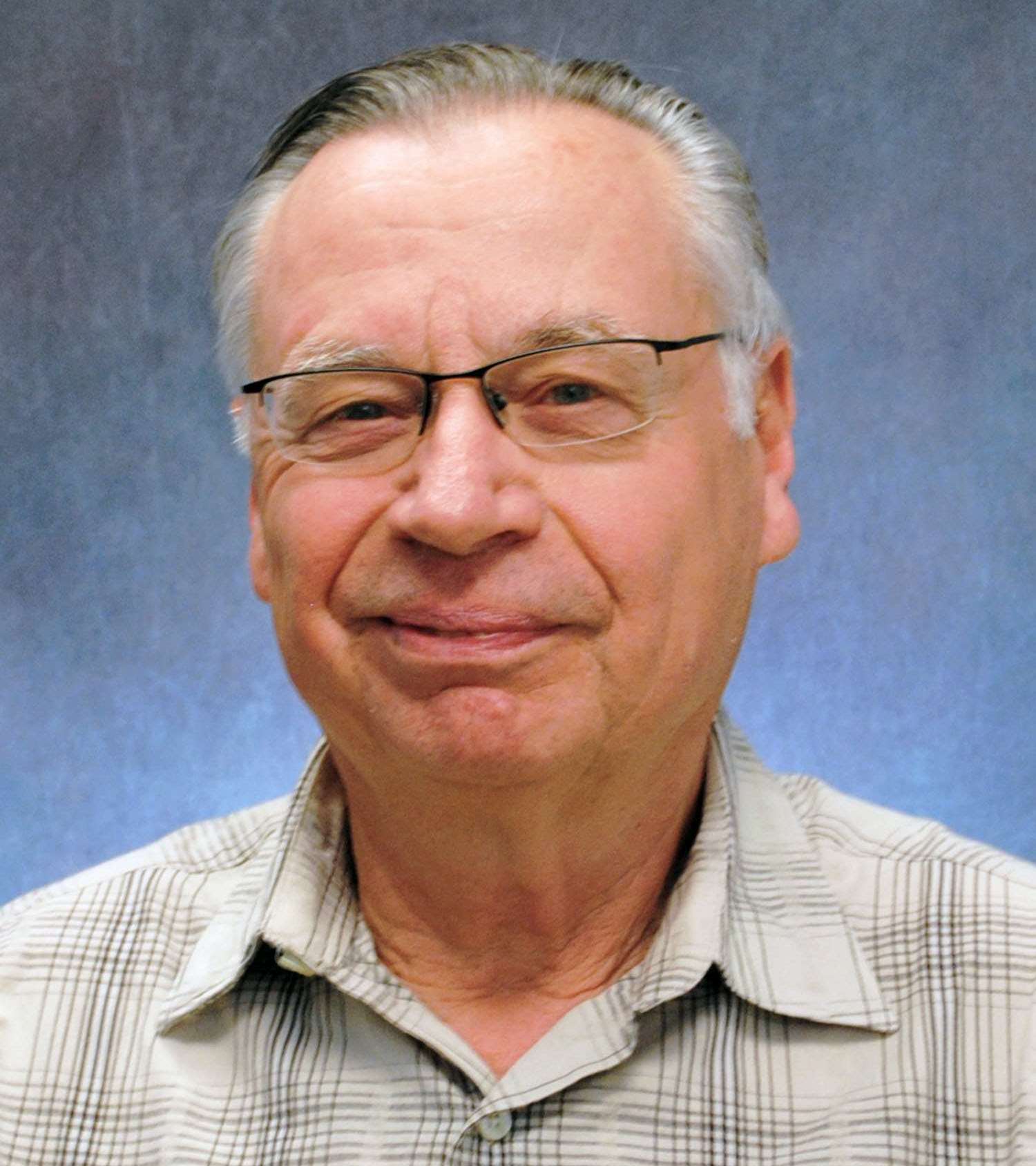 Currently, our studies are focused on the brainstem control of breathing frequency (fB). Earlier studies identified a region in the pons where clinical concentrations of mu-opioids induce bradypnea and respiratory arrest. Furthermore, a subregion was identified that appears to play a key role in the control of fB (Fig. 1). 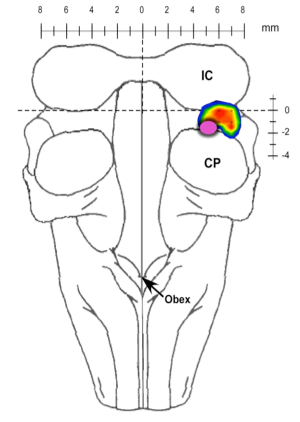 Microinjections of drugs that induce changes in the subregion respiratory neurons profoundly affect fB. Increases in subregion neuronal activity produce increases in fB while decreases in neuronal activity produce decreases in fB (ex. Fig. 2). The effectiveness of this pontine input of the control of fB and inspiratory and expiratory durations (TI & TE) was evaluated using precisely timed electrical pulse-train stimulation of the pontine subregion using a small bipolar concentric electrode. 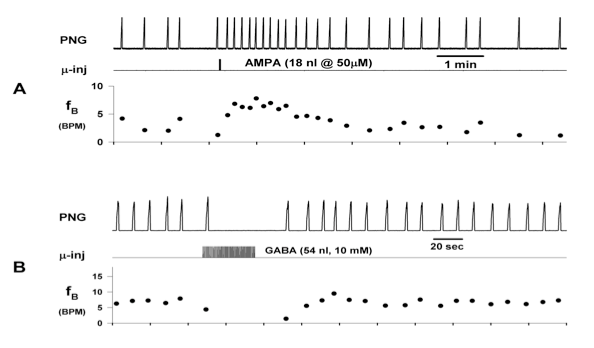 To determine if the responses to electrically-induced changes are qualitatively similar to those produced by drug microinjection mediated excitation, we used a multi-barrel glass micropipette with a carbon filament in one barrel to deliver both types of stimuli to the same location (Fig. 3). 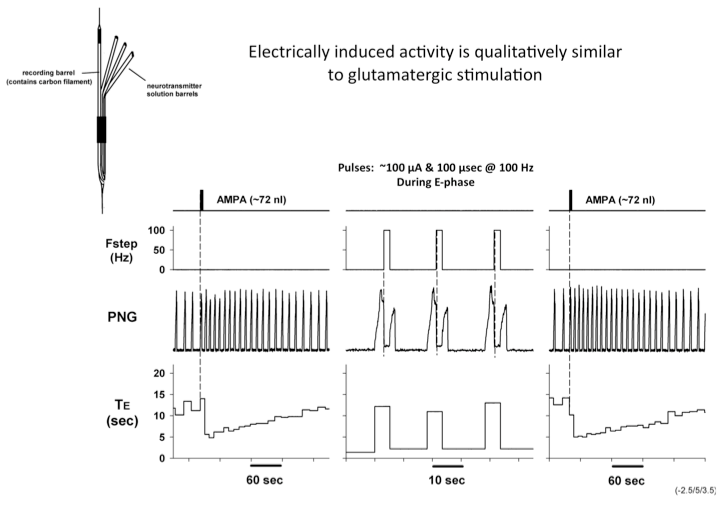 Microinjected AMPA produced an increase in fB primarily via a reduction in TE. Electrical pulse train stimuli delivered every other respiratory cycle produced a marked reduction in TE. The following peak PNG was also reduced. The repeated AMPA-induced response indicates that the integrity of the neurons was unaffected by the electrical stimuli. Studies using the electrical stimulation suggest that the pontine input acts to switch on inspiration by terminated the expiratory phase and activating pre-inspiratory neurons in the medulla. To better understand the underlying mechanisms, the activities respiratory neurons in the ventral respiratory column (VRC) of neurons were recorded using a 16-electrode probe while stimulating the pontine subregion. Preliminary data showed that pre-inspiratory neurons in the preBötzinger region were excited by AMPA-induced increases in the pontine subregion (Fig. 4). However, to determine if a direct synaptic input was present, we used the precise timing of electrical stimuli (constant 10 Hz) to generate post-stimulus time-histograms (PSTHs). The protocol setup is shown in figure 5. PSTHs show changes in the probability of neuronal firing caused by the stimuli and thereby suggest the type of synaptic input, excitatory or inhibitory, to the various medullary neurons. 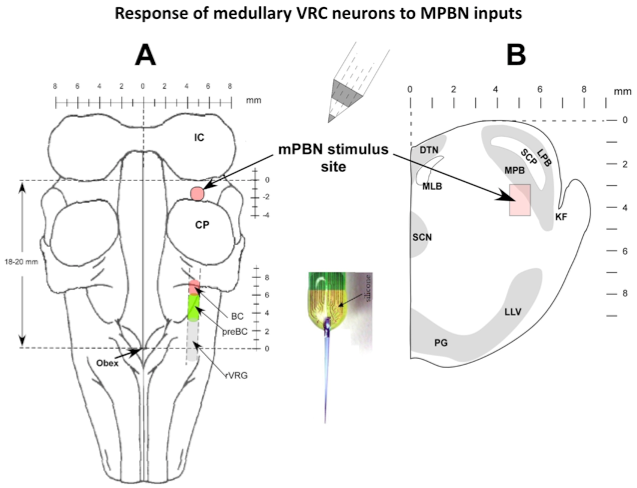 At the present time, 237/442 (~54%) of the medullary neurons had significant deviations in probability of firing, suggesting the pontine subregion is synaptically well connected with the medullary neurons. In addition, pulse-train stimuli synchronized with the PNG were further able to demonstrate the magnitude of the pontine input to various types of neurons. For example, pulse-train stimuli during the E phase produced an increase in the pre-I activity of a pre-I neuron (Fig. 6). For a Bötzinger E-neuron, the pontine stimulus shortened TE and produced a marked inhibition of the neuronal activity, even at a relatively low frequency (20 Hz, Fig. 6).

All of the above results suggest the following mechanism for the control of breathing frequency by the subregion in medial parabrachial complex. The pontine inputs excite pre-I pacemaker-like neurons and inhibit E-neurons to bring about the onset of inspiration.

The most recent finding is that the pontine subregion also controls the gain of the Hering-Breuer (H-B) reflex that is mediated by the slowing adapting pulmonary stretch receptors (PSRs). This reflex plays an important role in the control of phase duration TI and TE. Increases in the pontine subregion activity not only increase fB, but simultaneously attenuate the H-B expiratory prolonging effect (Fig. 9). This counter action promotes the increase in breathing frequency. The PSRs synapse on 2nd order neurons in the Solitary Tract Nucleus (NTS). We are now investigating if these 2nd order neurons are receiving inhibitory inputs from the pontine subregion. If the modulation is not occurring at this level, then it must be taking place deeper into the respiratory control network. 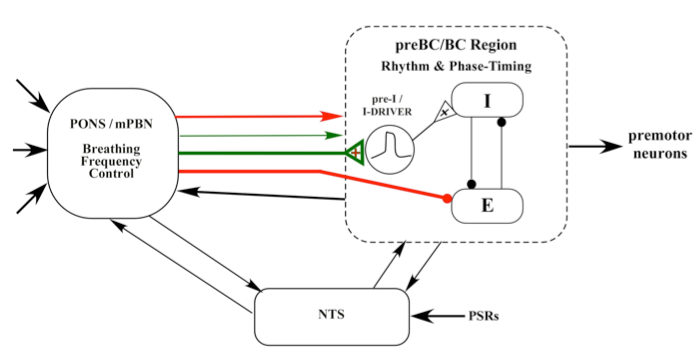 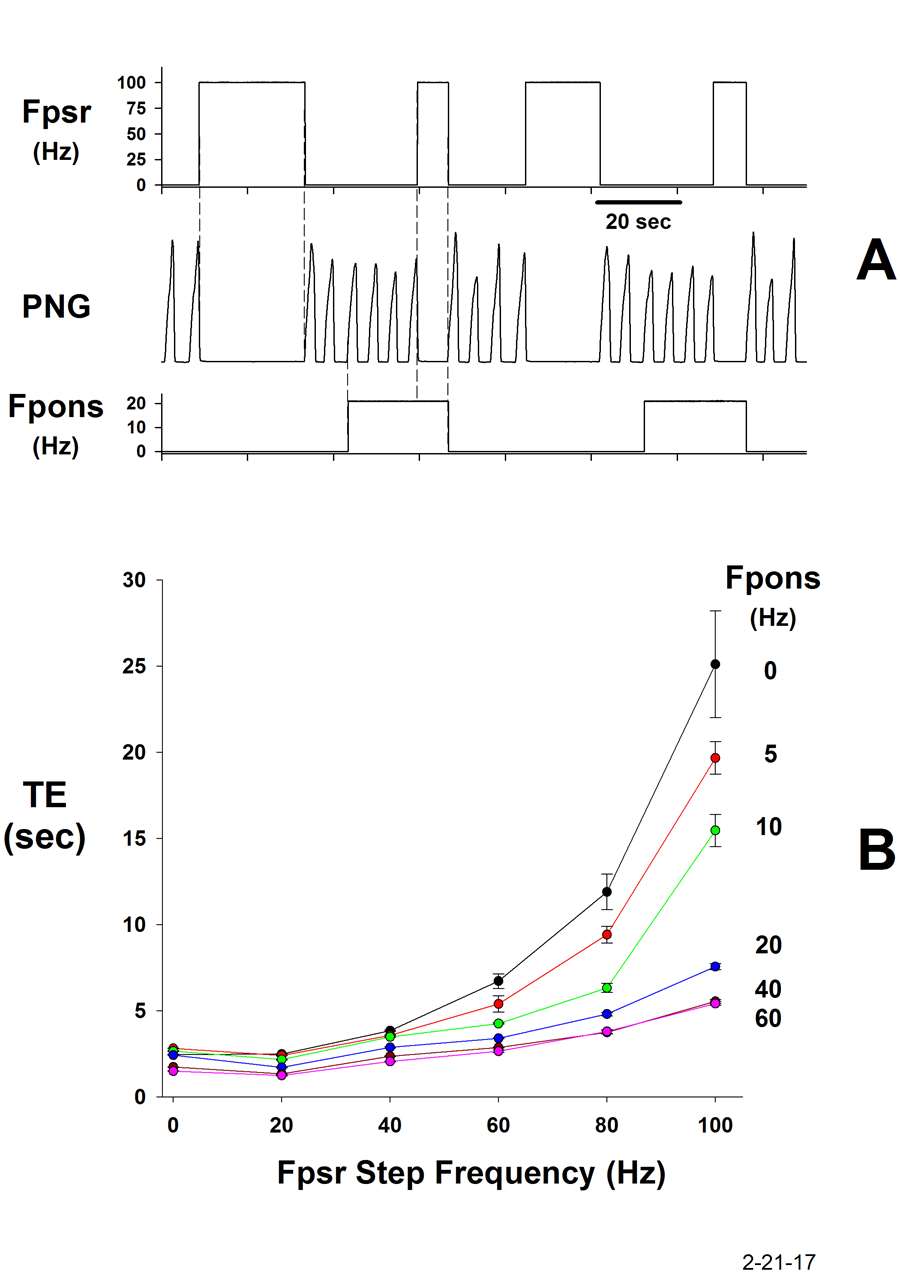 A: Electrically-induced PSR activity during the E-phase (Fpsr), prolongs TE. When the pontine subregion is electrically stimulated (Fpons), the PSR effect on TE is greatly reduced.
B: Plots of TE as a function of PSR frequency for the various pontine frequencies indicated. The strength of the H-B E-prolonging effect is proportionately reduced at each pontine stimulus frequency, thus controlling the gain of the reflex.

In summary, the results suggest that the pharmacological properties of this small pontine subregion warrant further investigation since it plays are primary role in the autonomic control of breathing frequency and the neurons in this subregion are highly sensitive to opioids and other drugs. Understanding the neurotransmitter/modulator receptor pharmacology will offer insights in ways to therapeutically stimulate or inhibit breathing frequency.