Dr. Olivier-Van Stichelen received her PhD degree in Biochemistry from the University of Lille, France in 2012. Her work was focused on the understanding of the nutrient-sensing O-GlcNAcylation in colorectal cancer development with a special interest in diet-dependent modification of the oncogene beta-catenin.

After completion of her degree, she was appointed as a post-doctoral Fellow in the Laboratory of Cellular and Molecular Biology at the National Institute of Health, Bethesda, MD, USA. In this lab, Dr. Olivier-Van Stichelen worked on different aspects of O-GlcNAcylation during development including X-inactivation of the O-GlcNAc Transferase gene. She also developed a brain O-GlcNAcase knockout model and studied the impact of sugar consumption during pregnancy on O-GlcNAc-dependent development of metabolic homeostasis. More recently, she developed interests in understanding the importance of artificial sweeteners for offspring’s metabolism and microbiome.

Finally, Dr. Olivier-Van Stichelen established her lab at the Medical College of Wisconsin at the crossroad of sweeteners, pregnancy, development and metabolism.

Fit For You: Artificial Sweeteners
WUWM 89.7

Access the O-GlcNAc Database
A catalog of O-GlcNAcylated proteins, their O-GlcNAc sites, and corresponding references

Is fake sugar like sucralose as bad for you as real sugar?
Radio Active - CBC Listen

Due to the global trend of growing sweetener consumption, determining the interplay between diet and pre- and post-natal development is emerging as a critical area for research. Currently, the average American eats around 22 teaspoons of added sugar every day (30 sugar cubes/day hidden in foods). This modern glucose-rich diet correlates with an increase in the prevalence of obesity, diabetes and others metabolic syndromes. Moreover, the effort to reduce sugar consumption has led people to consume more non-caloric sweeteners (Aspartame, Sucralose, Acesulfame-K...). While they appear healthier for glucose homeostasis than a high carbohydrate diet, recent studies have shown that artificial sweeteners impact glucose metabolism as well as gut microbiota, rising questions about their excessive use.

Therefore, understanding what happens when caloric and non-caloric sweeteners are metabolized is of utmost importance for public health and the focus of my research group.

O-GlcNAcylation is one of the key components of diet-responsive signaling. This unique glucose rheostat is a ubiquitous and dynamic glycosylation of intracellular proteins with approximately 1000 modified proteins described to date. Two key enzymes drive O-GlcNAc cycling: The O-GlcNAc transferase (OGT) adds the modification and the O-GlcNAcase (OGA) removes it. Although many studies have focused on the decrease or complete absence of O-GlcNAc cycling by modulating the expression or activity of OGT, only a few studies have targeted hyper-O-GlcNAcylation by disturbing OGA. Because this post-translational modification is directly dependent on glucose input, depleting OGA creates an artificial and constant hyperglycemia-induced O-GlcNAcylation state. Using Oga and Ogt knockout (KO) cellular and mouse models, we can decipher the impact of high carbohydrate diet on embryonic development.

Non-Nutritive Sweeteners in pregnancy and lactation

Part of my lab is interested in understanding the impact of Non-Nutritive Sweetener (NNS) consumption through pregnancy and lactation. Although, NNS have been found in mother’s milk and in placental blood circulation, no study has focused on the fundamental effect of those non-caloric sweeteners on the developing organism. Among the impacts described in adults are changes in intestinal hormonal secretion, glucose metabolism and most fascinating, re- duction of the gut microbiota. Nevertheless, the fundamental mechanisms of those changes are far from understood. Glycoproteins found on the surface of the intestinal epithelium define the glycocalyx and are an essential mammalian mechanism of communication with the gut microbiome. Their reciprocal relationship with the gut microbiome regulates not only nutrient breakdown, and food absorption, but also infection. We are convinced that by altering both microbiome and the detoxification process, NNS exposure in early life will impact metabolic homeostasis later in life. 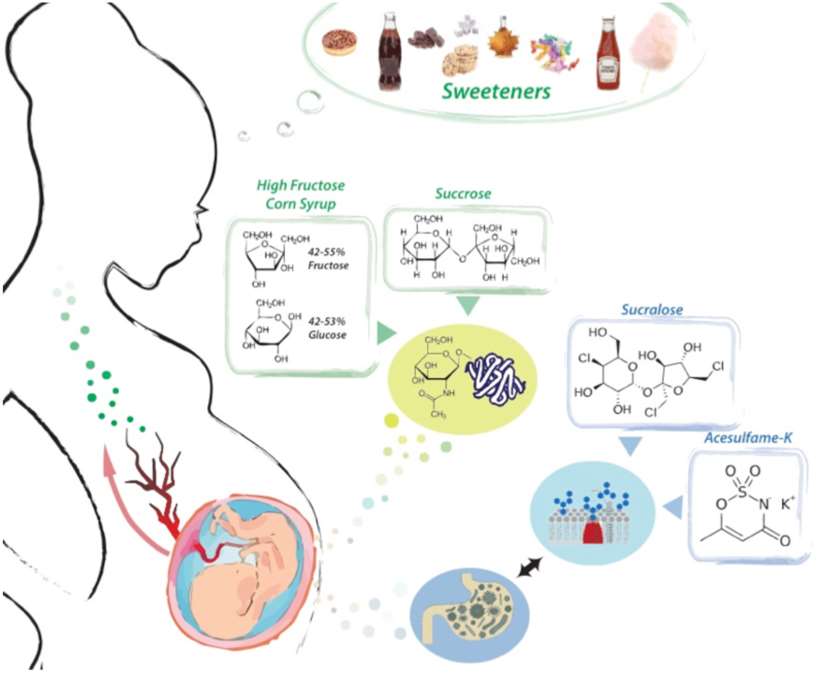