From the outset, Medical College of Wisconsin alumna and adjunct faculty member Catherine Wolf, MD, MPH, has taken an approach to patient care that veers off the beaten path. In 2006, when she founded a health care nonprofit in rural Haiti, Friends for Health in Haiti, she chose an isolated site in the mountains in the community of Gatineau outside Jérémie. No other physicians were practicing there, and it was almost 200 miles from the capital of Port-au-Prince. For Dr. Wolf, those were ideal conditions. Even as a young girl, Dr. Wolf says she knew she wanted to become a doctor and serve as a medical missionary in limited-resource settings.

"I used to pray that I could work as a doctor in a place where patients otherwise wouldn't receive care," she says. "I started working in Haiti in a 120-bed hospital in 1982. I met and became friends with a Haitian nurse there named Cherlie Severe, who was originally from Jérémie. I returned to the U.S. in 1994 and was unsure whether I'd return to work in Haiti, but friends of ours had identified a need for care in Jérémie, which was medically underserved. Nobody wanted to work in that area. Cherlie and I decided to see how we could help meet needs there."

In 2007, the two women worked with local Haitians to conduct a needs and resource assessment. Dr. Wolf says they intentionally took a different approach from other health care workers doing development work in Haiti. 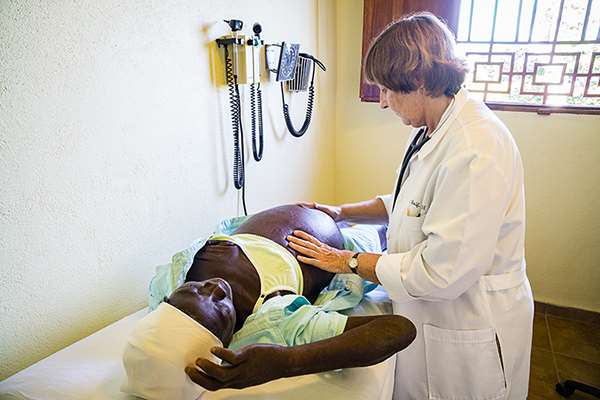 "Providers from the U.S. are well-meaning, but their approach may unwittingly create a tremendous sense of dependency," Dr. Wolf says. Her goal in addressing local health needs was to create a sense of "empowerment rather than dependency."

In her health needs and resource assessment, Dr. Wolf worked with Haitian partners to target 16 communities that were within a two-hour walking distance from the prospective clinic site. She and her team walked into the communities and met with local leaders. She says a white doctor walking into a rural village to sit on their front porches for a meeting was unconventional. They surprised local Haitian people living there, who were used to people from the U.S. driving everywhere.

"Our first question to them was, 'What do you have in your community in terms of medical care?'" Dr. Wolf recalls. "We wanted people to consider who they had practicing care among them and what resources they had created for themselves already, rather than them merely handing us a laundry list of their needs and depending on us to meet them."

As the community needs were identified, Dr. Wolf and Severe realized what patients required most was access to primary care.

"I love critical care medicine. I am boarded in internal medicine and emergency medicine back in the U.S. and consider myself a hospital doctor. But we realized what people needed in Gatineau was good primary care," Dr. Wolf says. "If you can take care of illnesses when they first start, you can avoid hospitalization. That became our goal."

Dr. Wolf, Severe and their team worked to be sensitive and responsive to the needs of the community. Dr. Wolf says it was especially helpful to have Severe working alongside her, who was from the area and had a deep understanding of the people and culture. Dr. Wolf and Severe began seeing patients two days each week in a small tin-roofed building on the land they purchased for their clinic site.

Since 2007, Friends for Health in Haiti has helped meet the needs of more than 40,000 patients. Today, Dr. Wolf sees between 50 to 60 patients each day, four days a week. She and Severe, who serves as nursing director, and their staff see men, women and children whose needs vary widely from hypertension and diabetes to prenatal care in adults, to pneumonia and diarrheal diseases in children. Friends for Health in Haiti also was recently approved by the Haitian government to begin immunizations, start a nutrition program, and provide malaria, tuberculosis and HIV care. 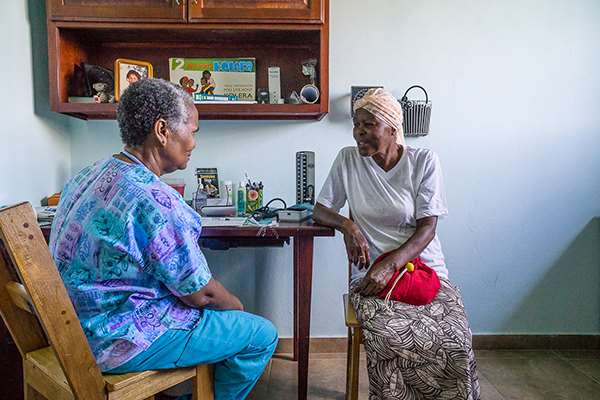 Through funding from churches and donors in the U.S., including the Rotary Club, the original tin-roofed makeshift clinic has been replaced by modern structures with a main clinic building and a pharmacy, lab and radiology building. The facilities are fully solar powered and have UV-purified well water.

The site now hosts volunteers from partner organizations in the U.S., including the Johns Hopkins School of Nursing. This year, Dr. Wolf also began hosting MCW students in their fourth year of medical school. Fourth-year MCW medical student Ellen Olander rotated through the clinic in January.

"After my time in Haiti, my ability to care for patients was enhanced," Ellen says. "Now, I have a deeper awareness and knowledge of the unique needs of individuals from developing nations."

The disease burden and health complications in resource-limited Haiti are wholly different from what medical trainees experience in the U.S. Because of the breadth of her work and the growing interest in global health from MCW students, residents, fellows and faculty, Dr. Wolf is working with the MCW Office of Global Health to design a fourth-year global health elective in Haiti for medical students to expose them to meeting patient needs in limited-resource settings.

Dr. Wolf says addressing these unique needs means going beyond patient clinic visits to working in community and public health. Together with partners, Dr. Wolf has strived to address water and sanitation issues and worked with local communities to provide 210 latrines in the area. After flooding decimated local farming, Friends for Health in Haiti oversaw a seed project for local subsistence farmers. In the wake of hurricanes in 2016, Dr. Wolf’s team was able to distribute food packs and relief materials in an equitable way because of a census of nearly 8,000 households they had taken the year before. In doing the census, the team traveled to areas in the mountains that were so isolated they had never received visitors. 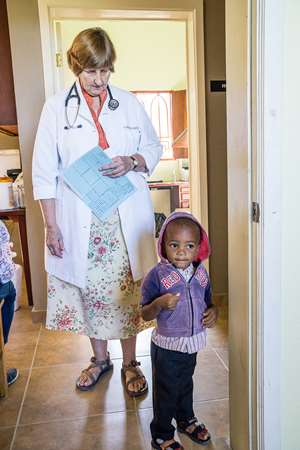 "The mountains in those areas are so steep that it makes one dizzy to look down to the left or right," Dr. Wolf notes. "But it made such an impression on the people who lived in those areas that we cared enough to come to them. They said, 'Nobody knows we are here.' They don't usually receive services from the government or anyone else. Partnering with local people to work in community development has been even more successful than we could have predicted."

Dr. Wolf says her ability to serve in community health and development in Haiti is due to the quality of training she received in the U.S., including her residency in internal medicine at MCW.

"I appreciated the depth of education and training I received at MCW. I learned to think critically, refined my physical examination skills, and was able to take full responsibility for my patients. I knew I was planning to serve in missions in under-resourced areas and those skills would prove crucial," she says. "My residency years at MCW cultivated that in me. I knew the buck stopped with me. That environment was ideal for me before stepping out into the mission field."

Dr. Wolf also went on to receive her Master's of Public Health from Johns Hopkins School of Public Health, where she says she tailored the curriculum to learn about running a nonprofit in a limited-resource setting.

"That's the benefit of adult education and something I recommend," she notes. "I could tailor my education to fit what I needed in my future role."

Dr. Wolf continues to think toward the future and is striving to continue making an even bigger impact for patients.

"We want to have the greatest impact on the greatest number of people. That has always been our goal," she says. "We'll continue to move toward that goal and hope to build a maternity center to do emergency obstetrics as well as routine deliveries and a small 15-bed inpatient ward for acute care patients."

Dr. Wolf says Friends for Health in Haiti has accomplished more than she imagined when she was an aspiring physician, but she is quick to attribute that success to others.

"Friends for Health in Haiti has been far more successful than I imagined, but it's not because of me," she concludes. "As I look back on what we have accomplished, I know God has worked through my weaknesses. And I rely on Cherlie and our community coordinator and our partners a great deal. Ultimately, I can say the thing we are most proud of is the care of our patients and the impact we've had in the Haitian communities that we serve."

The personal nature of mental health means conversations about it will be different for everyone.