On an evening in June 2017 in Wisconsin's Fox Valley, the Faucher family and friends of baby Atlas Faucher gathered to celebrate his first birthday.

"We probably went bigger than we ever thought we would," says Genevieve Faucher, Atlas's mother. "After the emotional year and the scare that he might not see his first birthday, it felt like a big milestone for us."

In the fall of 2016, when Atlas was three months old, Genevieve grew concerned for his health because he had what seemed to be a cold that would not go away. After Genevieve's grandmother developed bronchitis, Genevieve insisted that Atlas's doctors check him for bronchitis as well. The chest x-ray revealed an enlarged heart, and Atlas was referred to Children's Hospital of Wisconsin-Fox Valley for an echocardiogram. When the test revealed that Atlas was in heart failure, the family immediately was sent to Children's Hospital of Wisconsin (Children's) in Milwaukee, where they met with Gabrielle Geddes, MD, GME '15, assistant professor of pediatrics (genetics) at the Medical College of Wisconsin (MCW). After meeting with Dr. Geddes, the Fauchers felt hopeful that they would get answers and help for their son.

Dr. Geddes had begun seriously thinking about specializing in medical genetics when she was in her medical intern year in Chicago (before arriving at MCW and Children's), where she helped take care of a patient with a genetic neurodegenerative disease.

"It seemed like I could have these difficult conversations about rare conditions and convey the complex information that is part of these families' journeys," says Dr. Geddes. When she completed her pediatrics residency, Dr. Geddes became the first physician to enter – and then complete – MCW's Medical Genetics Residency/Fellowship Program in the department of pediatrics, section of genetics.

"Her enthusiasm was very clear from day one," notes Donald Basel, MD, associate professor and division chief of pediatrics (genetics) and founder of MCW's graduate medical education program in medical genetics. "We were particularly impressed that she brought with her the cardiogenetic research she had begun during her pediatrics residency."

In addition to continuing this research, Dr. Geddes provides a wide variety of clinical services in partnership with her fellow pediatric physicians and a genetics care team that comprises advanced practice providers, nurses, dietitians and genetic counselors.

As a geneticist in an academic medical center, Dr. Geddes's scope of practice includes advancing the knowledge and practice of genetic medicine. She recently published a paper in Pediatric Cardiology sharing the results of a quality improvement project to change how genetic testing is conducted in infants with congenital heart disease.

"Dr. Geddes demonstrated that you could raise diagnostic rates by increasing the upfront use of a costlier test. Because this protocol often prevented multiple tests from being ordered in an inefficient manner, the increase in diagnoses also came with a reduction in cost," notes Dr. Basel.

"Even though it is simple, this is probably one of the most significant contributions I will make because it is scalable and can easily be implemented anywhere. That is why we published in a cardiology journal – to show other specialists that they could do this too," Dr. Geddes adds. This research project demonstrates one example of how both the current and future of diagnostic medicine will be enhanced – and at times, shaped – by advances in genetic testing.

"Genetics is critical for all providers today and will only be more important as technology improves," says Dr. Geddes. "However, it is truly critical for patients like Atlas with rare diseases. They need a home with geneticists who can communicate effectively with primary care physicians and other specialists in order to tailor a unique plan of care." 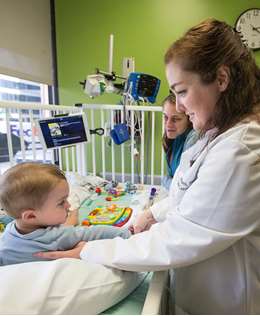 "Within the first week of the Fauchers' arrival in Milwaukee, Dr. Geddes informed the family that Atlas suffered from Pompe disease, a rare genetic disorder in which the body is unable to prevent sugar from building up in cells to abnormal levels – which is particularly problematic in muscle and heart tissue. Up until about 10 years ago, the infantile version of Pompe disease was not treatable and was considered a fatal diagnosis.

In that moment, when we found out, it felt very defeating – and we had a very hard couple of days. Talking with Dr. Geddes often during this time helped allay our fears, as did having a game plan for treatment," notes Genevieve. Atlas is treated every week with enzyme replacement therapy to supplement his body with much higher levels of the sugar-clearing enzyme.

"There is definitely lots of improvement. A day or two after the infusions, you see a pickup in his behavior and energy level. He's a completely different kid now," adds Genevieve.

"The passion and enthusiasm of the pediatric care teams at MCW and Children's have been amazing, and Dr. Geddes has been our go-to person throughout everything. It feels like she is just as invested as we are. Lately, we've been discussing with her all of the research that is happening – and it is something that gives our family hope," says Genevieve.

Hope for many more birthday parties to come.