Sadly, violence is a regular part of life for many children and teens, Ashley Hollo, a fourth-year student at the Medical College of Wisconsin (MCW), learned when she moved to Milwaukee.

“For a lot of the kids in the community, it’s normalized to be exposed to gun violence. But as someone who hasn’t always lived in Milwaukee, it was eye-opening to me and very heartbreaking,” she reflects.

Hollo first became interested in working with children affected by violence as an undergraduate student at the University of Wisconsin-Milwaukee when she participated in a pre-med program under the mentorship of Marlene D. Melzer-Lange, MD, professor of pediatrics at MCW. Dr. Melzer-Lange is the program director of Project Ujima, a prevention program that serves youth victims with the goal of ending cycles of violence. That experience and the opportunity to help children drew Hollo to MCW with the goal of working in pediatrics.

After completing her first year of medical school, Hollo once again became involved with Project Ujima, working as a research assistant on the project “Optimizing presentation of patient reported outcomes feedback to youth participants in a violence intervention program.” She also worked as a camp counselor for Project Ujima’s summer day camp. The six-week camp helps young victims of violence, whether it is gun violence or interpersonal, learn life skills in a safe environment. It also provides other opportunities such as field trips that these young people might otherwise not have access to, Hollo says. That experience opened her eyes even further.

“I saw the profound impact that exposure to violence has on children, whether it’s the kids themselves who have been victimized or their family members,” she shares.

After that summer, Hollo continued her studies at MCW, rotating at Children’s Wisconsin. There she was able to help children heal from wounds that often resulted from violence, but she couldn’t escape the feeling of wanting to do more.

“Yes, we can fix their physical injuries and send them home and provide them support services, but what can we do to ensure we’re not seeing kids trickle into the emergency department or ICU with violence-related injuries?” Hollo reflects. “It’s a really helpless feeling.”

Mitigating the Effects of Violence on Children 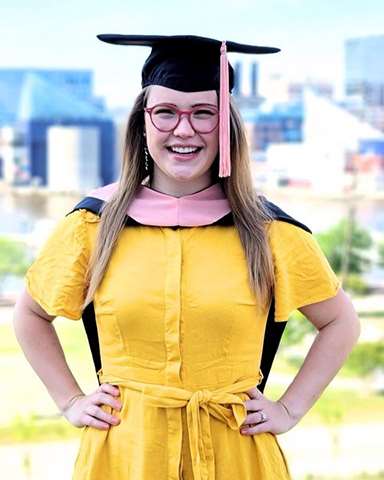 Hollo wanted to learn more about the preventative aspects of addressing violence. To do so, she felt that she needed to go outside the medical school. With the full support of her mentors at MCW, including Dr. Melzer-Lange and Michael Levas, MD, MS, associate professor of pediatrics and medical director for Project Ujima, Hollo pursued graduate school with a goal of earning a master’s degree in public health.

“I’m very grateful that my mentors encouraged me to pursue this degree,” she says. “They wanted me to explore it because it was going to be a big part of my career.”

Hollo, who had just completed her third year at MCW, was accepted to the prestigious Johns Hopkins Bloomberg School of Public Health in Baltimore to receive specific training on health policy and violence prevention.

“I moved to Baltimore during the pandemic and completed most of the coursework virtually, which was challenging, but I loved the experience,” says Hollo, who completed an 11-month accelerated program there.

Violence Prevention Policy and Engagement at the Medical College of Wisconsin

Hollo returned to Milwaukee with an even fuller complement of tools to address violence. Back at MCW, Hollo was connected with Reggie Moore, the director of violence prevention policy and engagement for the MCW Comprehensive Injury Center. One of her tasks was to help educate the community on the potential impact of a policy related to firearms, specifically a bill that would lower the conceal and carry age in Wisconsin from 21 to 18 and allow guns to be present on school grounds.

“Firearms can be such a fiery issue,” Hollo says. “But the most important thing we can do is look at what the data shows and see what the best evidence-based policy is to help keep kids safe.”

The best policy, she explains, is for people who are 18 not to have guns.

“Kids’ brains are still developing into their 20s,” Hollo says. “Kids and young adults don’t have the same ability as adults to fully weigh risks, which is an important aspect of carrying a firearm.”

Gathering that information and making it available to the public is a way to help make the community safer, she adds.

“People hear about violence every night on the news but don’t usually hear about the data-driven aspects of violence prevention,” Hollo says.

As far as what her future holds once she starts her pediatric residency in Colorado this summer, Hollo isn’t quite sure. She is interested in pediatric intensive care, emergency medicine and child advocacy, all of which have a violence prevention component. She also wants to conduct community-driven research, learning from advocates and residents what their needs are and what’s best for them.

While she moves closer toward her goals, Hollo is thankful for the guidance she’s received.

“Dr. Melzer-Lange told me I was a good enough student to apply to medical school and encouraged me along the way, and Dr. Levas told me to chase my dream of getting a master’s in public health,” she shares. “I’m really proud of what I’ve accomplished, but I also think that a lot of that is attributed to their mentorship.”

The COVID-19 pandemic exacerbated mental health issues for many children.