Julia A. Uihlein, MA, Dean of the School of Medicine, Provost and Executive Vice President 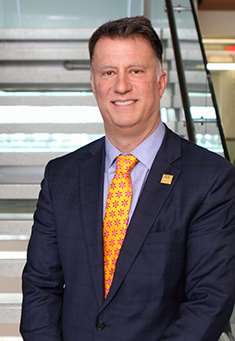 Dr. Joseph Kerschner became the Dean of the School of Medicine and Executive Vice President of the Medical College of Wisconsin (MCW) in November 2011 following 10 months as Interim Dean. Dr. Kerschner assumed the additional role of Provost of the MCW Health Science University in 2017. He also is Professor in the Departments of Otolaryngology and Communication Sciences and Microbiology and Immunology. He has held numerous leadership roles in organized medicine, including currently serving as Chair of the Board of Directors for the Association of American Medical Colleges (AAMC). He previously served as Chair of the AAMC Council of Deans. Dr. Kerschner maintains an active membership on numerous professional and honorary societies, is Past President of the American Society of Pediatric Otolaryngology and Immediate Past President of the International Society for Otitis Media.

Dr. Kerschner maintains an active research laboratory which has been continuously funded by the National Institutes of Health since 2001. Dr. Kerschner’s research (as a Principal or Co-Principal Investigator) has received extramural funding of more than $15 million. He has published ground-breaking basic and clinical research in otitis media (middle ear inflammation) which has fundamentally improved the understanding and treatment of this extremely common disease in children. Dr. Kerschner has published 137 manuscripts in peer-reviewed journals and has authored or co-authored 23 books, chapters and reviews. He provides editorial expertise for the leading national and international journals in otolaryngology and is the Associate Editor of the International Journal of Pediatric Otorhinolaryngology. Dr. Kerschner’s passion for the development of new knowledge and discovery is further demonstrated through his leadership and support of the research programs in MCW’s School of Medicine, which consistently rank in the upper-third of US medical schools and garner approximately $240 million in annual extramural support.

Dr. Kerschner has been deeply involved in medical education and mentorship throughout his career and has been a visiting professor and invited lecturer at more than 200 national and international meetings on a variety of topics including leadership development, medical economics and his areas of research expertise. He personally has mentored more than 30 pre- and post-doctoral students, many of whom have gone on to enjoy careers in academic medicine. As Dean of MCW’s School of Medicine, Dr. Kerschner has led the development of a completely revamped medical student curriculum (the Discovery Curriculum) which emphasizes early clinical exposure and individualized learning through topical education options called “Pathways”. His leadership of graduate medical education programs at the Medical College of Wisconsin Affiliated Hospitals helped it to receive recognition as one of the most outstanding Graduate Medical Education Programs in the US by the Association for Graduate Medical Education and Gold Foundation, via the 2016 DeWitt C. Baldwin, Jr. Award. In addition, Dr. Kerschner has led the development of two regional medical school campuses utilizing a novel education model which includes medical students embedded in regional communities throughout their studies. The development of new primary care and mental health residencies, in conjunction with the new regional campuses, will provide graduate medical training opportunities and further address physician shortages and health disparities.

Dr. Kerschner maintains an active clinical practice and is recognized as a national expert in pediatric otolaryngology. He has been named as one of the Best Doctors® in America continuously since 2004.

Dr. Kerschner is committed to the communities that MCW serves and, among other service commitments, has been a volunteer member of the Board of Directors for the University of Wisconsin-Milwaukee Research Foundation, the University of Wisconsin-Milwaukee Foundation, Children’s Hospital and Health System, and Divine Savior Holy Angels High School. Dr. Kerschner’s dedication to service was recognized in 2020 in his receipt of the Jerome C. Goldstein, MD Public Service Award from the American Academy of Otolaryngology-Head and Neck Surgery.