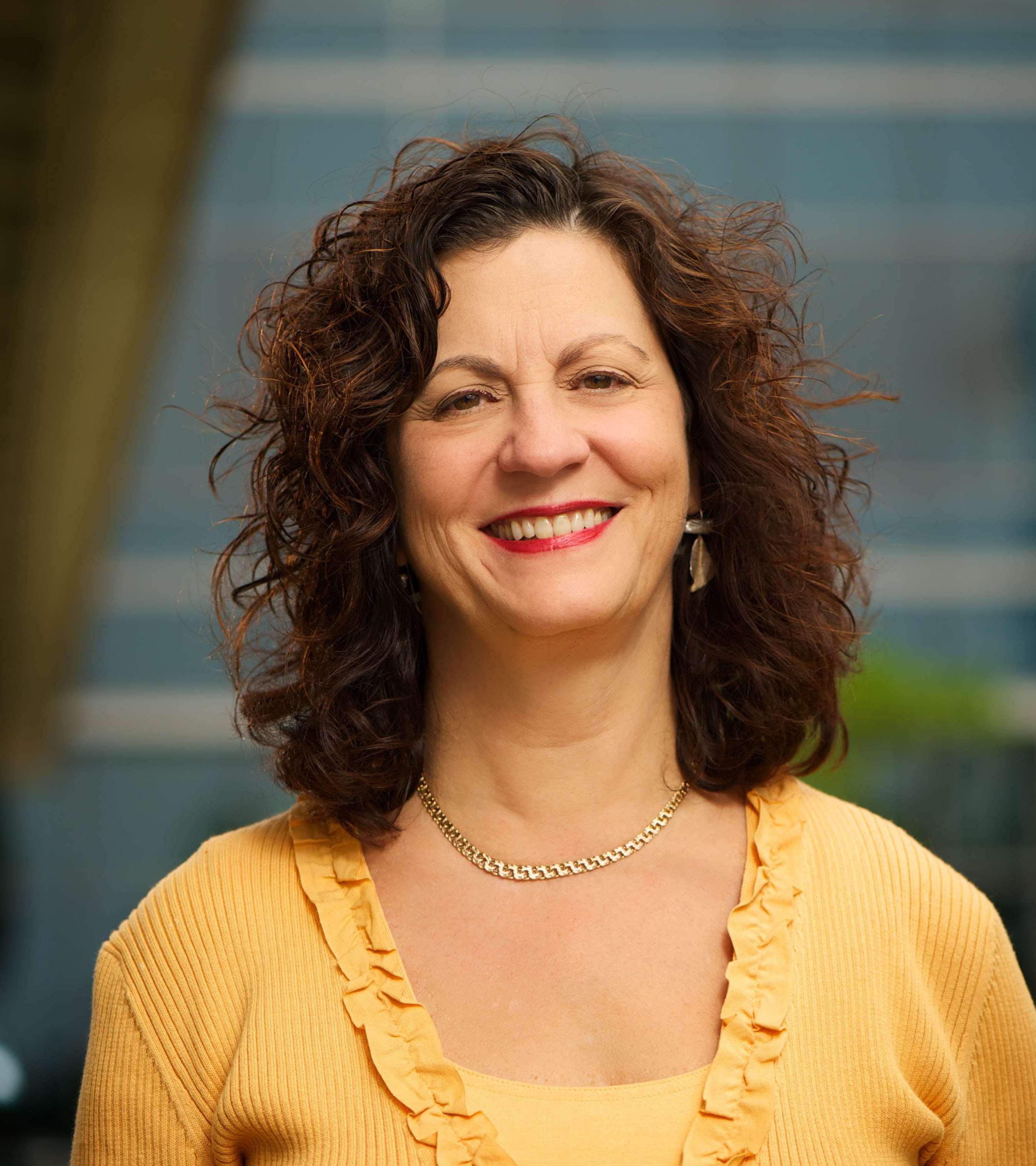 Vaccinia virus is the prototypic poxvirus and was the virus used in the vaccination campaign that led to the global eradication of smallpox.  Vaccinia virus replicates solely within the cytoplasm of infected cells, and the 192 kb DNA genome encodes most, if not all, of the functions required for such processes as gene expression, DNA replication, and virion assembly. We have focused our attention primarily on viral DNA replication, the role of virally encoded kinases and phosphatases within the infectious cycle, and virion morphogenesis. Our work integrates diverse approaches drawn from the disciplines of virology, molecular genetics, cell biology, and biochemistry. 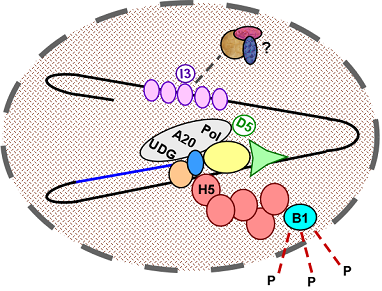 The organization of replication in membrane-delimited compartments, the role of the H5 protein as a replication scaffold, and the means by which UDG, A20, Pol, D5 and I3 achieve efficient and faithful replication are of particular interest to the lab.

With regard to DNA replication, we are interested in understanding how replication is organized within dedicated cytoplasmic domains, in deciphering the mechanism of replication, and in pursuing a biochemical and genetic investigation of the proteins involved. The core of the replication machinery itself is the viral DNA polymerase, and we have been focusing on how the polymerase (the E9 protein), the viral A20 protein, and the viral uracil DNA glycosylase (UDG, the D4 protein) work together to accomplish processive DNA synthesis. The participation of UDG, which is an enzyme more commonly associated with DNA repair, in the constitution of the processive polymerase is a novel feature of the viral system. We are also characterizing a virally encoded ssDNA binding protein (I3) and the D5 protein, an NTPase whose sequence has the hallmarks of a superfamily III helicase. Additionally, we are pursuing the hypothesis that the abundant H5 protein serves as a scaffold to support replication within the membrane-delimited cytoplasmic replication domains. Our goal is to fully understand how these proteins function coordinately to accomplish faithful and efficient DNA synthesis. Finally, we are studying how the newly replicated viral genomes are encapsidated into nascent virions through the actions of the putative ATPase A32 and the I6 telomere-binding protein.

Stages i and ii of membrane biogenesis are of particular interest to the lab.

We are also very interested in the process of virion morphogenesis. We are using a variety of genetic, biochemical, cell biological and ultrastructural approaches to understand how nascent virions form. The biogenesis of the viral membrane is quite unique and involves the initiation and enlargement of a planar lipid bilayer within the cytoplasm. We are trying to identify the source of the virion membrane, and are testing the hypothesis that is diverted from the endoplasmic reticulum in a manner that may involve lipid droplets. Structure/function analyses of the transmembrane and regulatory proteins required for membrane assembly is a major focus of the lab. The viral F10 kinase drives the earliest stages of membrane assembly, and we are studying the regulation and substrate specificity of this enzyme to determine how it mediates the diversion of ER membranes. The process of virion assembly involves a cascade of protein/protein, protein/DNA, and protein/lipid interactions; it serves as an excellent model system for the process of cellular organelle biogenesis. 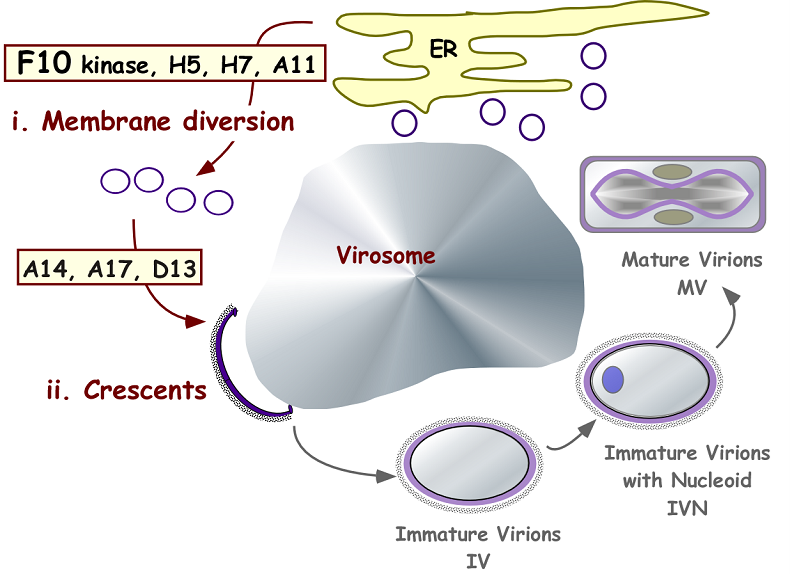 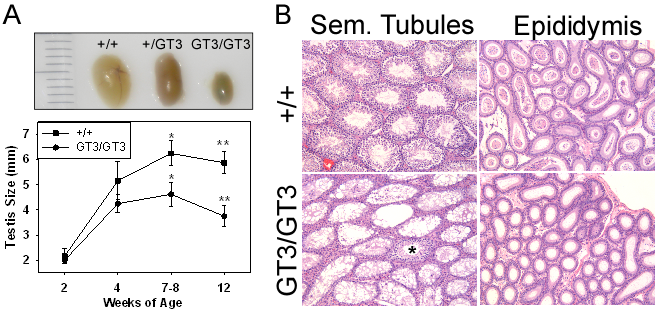 Male mice defective for VRK1 expression (GT3/GT3) have a profound defect in spermatogenesis.

Mice homozygous for the GT3 allele of VRK1 are infertile; their testes are small (A) due to a lack of spermatogonial proliferation in their seminiferous tubules (B). Consistent with this defect is the absence of sperm in the epididymal lumen (B, right).

The viral B1 kinase serves as a key participant in the intricate virus/host interaction by overcoming the intrinsic antiviral action of a cellular DNA binding protein known as BAF. Our studies of the B1/BAF axis led us to study a family of cellular protein kinases from which B1 is likely to have evolved. These kinases, known as the VRK proteins (vaccinia related kinases) are relatively understudied ser/thr protein kinases. e have shown that VRK1 also phosphorylates the cellular BAF protein, abrogating its DNA binding activity and modulating its nuclear localization. VRK1 is thought to be a pro-proliferative protein that may have roles in both the early (G1) and late (mitotic) stages of the cell cycle. Over expression of VRK1 has been associated with a variety of cancers, and it has been shown to correlate with poor clinical outcome in breast cancer patients. We have initiated studies aimed at determining the impact of VRK1 depletion or overexpression on the proliferation of mammary epithelial cells in 2D and 3D culture, and on their tumorigenic and metastatic properties in mice. We have also generated a genetically altered mouse that is hypomorphic for VRK1 expression. Although mice that express ~15% of wild-type levels of VRK1 are viable, they are infertile. The infertility of the male mice is due to a severe defect in spermatogonial proliferation. We are pursuing in-depth studies of the role of VRK1 in both male and female fertility.