Nabeel Quryshi, one of the nation’s top young investigative minds, will present this year at the Nobel Prize Award Ceremony.

Nabeel Quryshi, 18, was always the type of person who wanted to examine how things work. One of his first curiosities as a child was to learn how construction machinery — from bulldozers and cranes to excavators – functioned. As he grew, so did his investigative nature.

“Research and discovery is my passion. It has the power to enact change on a global scale and allows us to better understand the world around us,” says Quryshi, who will attend Harvard University in the fall, where he plans to study cellular and molecular biology, statistics and the emerging field of bioinformatics.
The young scholar’s interest in research led him as a 14-year-old to reach out to investigators at the Medical College of Wisconsin (MCW). His first response came from Andreas Beyer, PhD, associate professor of medicine at MCW, whose lab focuses on cardiovascular research.

It just so happened that he and his collaborator, David Gutterman, MD, principal investigator and Northwestern Mutual Professor of Medicine at MCW, were looking for someone to do computational analysis and other work in the lab.

“He did his homework and asked the right questions,” Dr. Beyer says of Quryshi’s initial work in the lab. Realizing that computational analysis was just the beginning, the investigators also allowed him to participate in more lab-based projects.

The lab project Dr. Gutterman, Dr. Beyer and Quryshi have been working on has evolved into an award-winning research on the protein telomerase, which the investigators found has the ability to restore vascular function and combat coronary disease. The challenge with telomerase, according to Quryshi, is that it also has been found to damage cells during chemotherapy treatments. 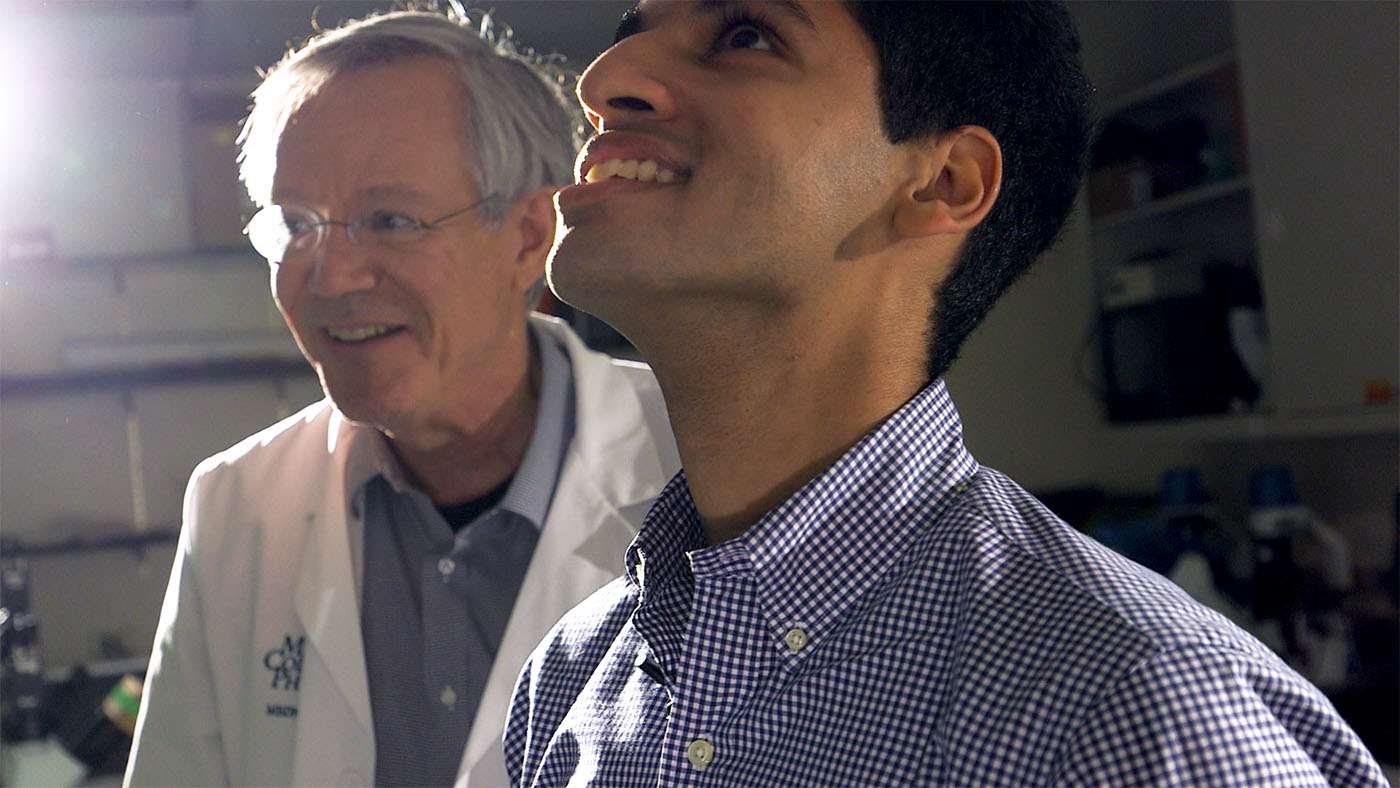 That led the team, who conducts research using human tissue and blood vessels, to focus on developing methods to mitigate and manipulate the effect of telomerase on certain cells, which could lead to new methods of delivering the protein and fight cancer while limiting damage to the cardiovascular system, Quryshi explains.

Quryshi is also working with Ranjan K. Dash, PhD, associate professor of biomedical engineering at MCW, to translate some of his findings from Dr. Beyer’s and Dr. Gutterman’s labs and also create computational models that will allow for simulation testing of telomerase and other proteins. Quryshi’s work will help bridge the gap between the two areas, Dr. Beyer says.

Quryshi has earned several major accolades for his work and presentations, perhaps the grandest being the Dudley R. Herschbach SIYSS Award at the International Science and Engineering Fair (ISEF) in Los Angeles, which includes an all-expenses-paid trip to attend and present a portion of the study at the Nobel Prize Award Ceremony in Stockholm, Sweden, this December. For the past two years in a row, he won the prestigious First Award in Biomedical and Health Sciences at ISEF – for which he received $3,000 and had a minor planet named after him by MIT’s Lincoln Laboratory – and in May 2018 was named a U.S. Presidential Scholar. Quryshi also won the Best of Category Award in the Biomedical and Health Sciences Category at ISEF in 2018.

Quryshi says that although he is deeply grateful and humbled by the awards and recognition, perhaps the greatest benefit is the opportunity to meet other young scholars.

“The recognition allows me the opportunity to begin forming a network with other like-minded student-scientists. These young scholars and innovators could be future partners and collaborators in performing cutting-edge research in order to make a positive difference in the world,” he says. “Getting awards is icing on the cake.”

Although Quryshi might not be wowed, Dr. Beyer certainly is.

“Going to Stockholm for the ceremony and to present some of his work is a once-in-a-lifetime opportunity,” he notes. “It’s about as close as I will get to having anything to do with the Nobel Prize!”

Being able to connect with other researchers in Sweden and other locations ties in well with a lesser-known goal of Quryshi’s. He has begun working to create a social network for researchers with the idea of creating an algorithm that helps connect those working on projects that could become collaborations.

“It can bridge the gaps between a lot of different departments, especially for undergraduate and graduate students who might feel overwhelmed and are not well-versed enough in the field to realize there are similar projects going on around the world in which the researchers could work together or share their findings on,” he says.

Whatever Quryshi, who plans to continue his research at MCW while at Harvard, decides to do, he will no doubt be successful, says Dr. Beyer.

“The thing that makes Nabeel stand out is his drive and motivation. With his curious mind and incredible intelligence, he will continue to drive discovery and will make an outstanding scientist,” he says.

John Mason, a Marine who served in Vietnam, struggled silently for years with depression and PTSD.