Joseph Bovi, MD, GME ’07, MCW professor of radiation oncology, always knew he wanted to be a doctor. His grandmother’s battle against pancreatic cancer during his high school years further strengthened his resolve to enter medicine and specialize in cancer care. While in medical school, he was setting up a medical oncology rotation when a clinical faculty member’s vacation plans presented a fork in the road.

“I was initially planning to pursue a residency in medical oncology. The medical oncologist I was going to rotate with was headed out of town and instead I was presented with the opportunity to rotate in radiation oncology for a week,” Dr. Bovi says. “Within that week I was awestruck by this specialty. I knew it was the field I needed to enter.” 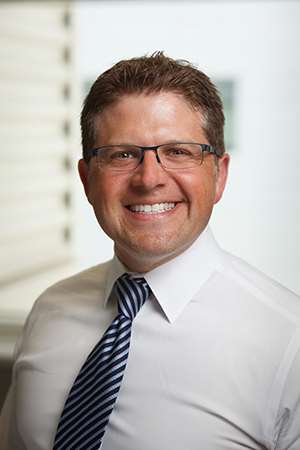 “When I entered the field, patients with brain metastases had little consistency in their plans of care. We observed long-term survivors with brain metastases in our own clinic, so we knew there had to be differences in these patients that could become opportunities for better outcomes if we understood the disease process better,” Dr. Bovi recalls.

Dr. Bovi discussed this issue with Dr. Schultz, and they determined there was a need for a treatment algorithm, which is a flowchart diagram that depicts different treatment decisions based on symptoms and other clinical criteria. This algorithm would help guide the creation of more personalized treatment plans by taking into account numerous factors – including the amount and size of brain tumors in a single patient. Their goal was to achieve better patient outcomes while reducing side effects to the brain that factor heavily into patients’ quality of life.

“Dr. Schultz has been the consummate mentor in supporting me through the 20-30 iterations of a treatment algorithm that then positioned us to innovate in a number of areas,” Dr. Bovi notes.

After the algorithm was endorsed by the physicians in all of the specialty areas involved in treating brain metastases, it initially was formatted as a large poster that hung in the clinic to help guide consistency in decision-making. It wasn’t long before a colleague with experience in smartphone application development commented that the flowchart also could be used as the “wireframe” – or conceptual foundation – for creating a mobile application that physicians could consult by using technology that nowadays is always at hand.

“I began conversations with Dustin Hahn at the UW-Milwaukee’s App Brewery, and he shared our enthusiasm for the project,” Dr. Bovi says.

Dr. Bovi and his team are at the finish line on the creation of a mobile app that provides access to Dr. Bovi’s treatment algorithm and mirrors the forum of the weekly Froedtert & MCW Cancer Network’s Brain and Spine Tumor Program’s neuro-oncology tumor board. This tumor board is a multidisciplinary group that reviews unique aspects of each patient’s case and collaboratively renders an appropriate, evidence-based treatment plan. The tumor board includes experts in neurooncology, neurosurgery, radiation oncology, medical oncology, neuropathology, neuroradiology and neuropsychology.

“What we’ve found is that in many instances we can’t wait up to a week to develop a plan of care for certain patients with brain metastases. They need immediate treatment. We also discovered that it would be beneficial to give our physicians practicing at other clinical locations access to the expertise of a multidisciplinary tumor board, but in a virtual way as an application on their mobile device,” Dr. Bovi adds.

Dr. Bovi’s solution (the app) is called NIMBLE, which stands for “Network for the Integrated Management of Brain Metastases: Linking Experts.” The NIMBLE app allows providers to submit a patient for consideration in a virtual tumor board discussion, which unfolds in real time and looks similar to a group text messaging thread in the default messaging app on any smartphone.

“The difference is in the details. The messaging feature in NIMBLE is encrypted to allow for the sharing of personal health information and also allows for the sharing of medical imaging and other test results relevant to reaching a consensus opinion on treatment,” Dr. Bovi comments.

Immediately prior to beginning the interview for this story, Dr. Bovi was wrapping up a conversation with the pilot group currently putting the NIMBLE app to the test. They were discussing a patient who previously would have had to wait almost a full week before a treatment plan could be determined at the next in-person tumor board meeting. Instead, “it took 30 minutes from start to finish to reach a consensus via virtual messaging, and the patient will begin treatment today,” Dr. Bovi shares.

While the NIMBLE app is being finalized, Dr. Bovi also has led the formation and launch of the Froedtert & MCW Cancer Network’s Brain Metastases Program, which is one of the first of its kind in the US. Dr. Bovi says that the development of this program reflects the national momentum behind the emerging field of brain metastasis treatment. The inaugural Society for Neuro-Oncology’s Conference on Brain Metastases was held in New York City in August 2019, and it marked a major milestone in the growth of this subspecialty.

“Considering where we were at the beginning of my career, it was surreal to be one of the speakers at the first-ever weekend symposium focused only on the treatment of brain metastases. Our team is on the leading edge of a field that is rapidly evolving, and I am excited to help lead, implement and share innovations such as the NIMBLE app that will improve care for our patients,” Dr. Bovi concludes.