Dreaming of a Cure

Everyone has to have a dream, according to Bryon Riesch, president of the Bryon Riesch Paralysis Foundation.

“My dream is to walk again,” says Riesch, who was paralyzed from the chest down with limited use of his arms during a freak accident more than 20 years ago.

It was April 25, 1998, in fact, when an innocuous trip down a slip-and-slide altered his life path, and he instantaneously joined an estimated 5.6 million people living with paralysis. His life has been full of challenges since then, which he’s met head on, but he also believes his accident has placed him in a position to achieve his purpose in life: “To find a cure for paralysis.”

Working toward a cure

The best opportunity to find a cure, Riesch believes, is to raise awareness on issues related to spinal cord injuries and to provide seed funding research that can take the next great idea and turn it into a reality. He credits the team at Froedtert & the Medical College of Wisconsin with helping him recover from his injury as well as improving the quality of life for him and others who live with paralysis. He says he believes that researchers at MCW will continue to make advances in the field, which is why he throws his vast support behind the institution in the form of funding.

“The doctors, the people, the students – they have created a place to succeed. I want researchers there to keep shooting for the stars,” Riesch says.

One of the main researchers who has been able to advance the field with the support of the Bryon Riesch Paralysis Foundation is Shekar N. Kurpad, MD, PhD, Sanford J. Larson Professor and Chair of Neurosurgery at MCW. Kurpad was recruited to MCW in 2002 specifically to build a spinal cord injury clinical research program. To do that, he needed seed funding, which supports new ideas in the lab that once proven can secure millions of dollars in National Institutes of Health and other federal grants and eventually become game changers in the field.

“These seed grants fund a crazy idea that other federal funding agencies might see as too novel or risky, but that drive early discovery. It’s a substantial amount of money for a young investigator who has an idea that will cause a paradigm shift in an area of research,” says Dr. Kurpad, who first met Riesch in 2005. It was Riesch’s foundation that first funded Dr. Kurpad’s spinal cord research at MCW. After 20 rejections from other funders, he finally found someone who believed in his ideas, Dr. Kurpad recalls.

That seed grant turned into millions of dollars in federal funding for a larger study, as has been the case with several other projects at MCW that were originally funded through seed grants from the Bryon Riesch Paralysis Foundation. Foundation funding supported research on imaging for spinal cord injuries that has led to advanced diagnostics that help doctors look at the impact of rehab on the spinal cord. Funds from the foundation also helped establish the Bryon Riesch Foundation research labs at MCW.

The foundation has provided well over $1 million in funding to MCW research projects and has recently announced another gift of $1.25 million.

“MCW has truly earned that. They’ve worked hard, and we’re so proud to be able to support them and make the next 10 to 20 years that much more exciting,” Riesch says.

A long way to go

The advanced research at MCW and elsewhere has improved the quality of life for those who are paralyzed by creating smaller cures that have helped people regain feeling in their fingertips and other limbs as well as improving function of their bladders. In the case of Riesch, MCW doctors were able to insert a pump into his back that ended his debilitating back spasms and reduced his medications.

Even small advances like that were once thought impossible, says Dr. Kurpad. He remembers reading textbooks as a medical student that made it clear that once any part of the nervous system – and especially the spinal cord – was injured, there was no possibility of regeneration or return of function.

“I’d like to see that proved wrong. I’d like to see Bryon walk. I’d like to see other patients with spinal cord injuries walk,” says Dr. Kurpad. “Now it’s our job as scientists and physicians to find out how to harness the knowledge to make a practical difference.”

And Riesch says it’s his and his foundation’s job to keep supporting innovative research by raising funds during an annual golf outing, a fashion show where all the models roll the runway in wheelchairs, a run-walk- roll event at Carroll University, kayaking and other events.

All in all, the impact his foundation has had and the relationships he’s built along the way are so rewarding that Riesch says he’d have to think twice about whether he would trade it all to not ever have been paralyzed.

“It’s really put me in a unique position and given me a true meaning. It would be hard to turn all of that away,” he reflects.

Hopefully though, he will walk again, he says. And not just him, but many others.

“We have a goal to walk again,” Riesch says. “These new ideas and the ingenuity that’s going on can take those limits and blast them away. Before you know it, we’ll be walking again.”

Learn how genetic testing and research have provided insights on Russell’s retinal disorder. 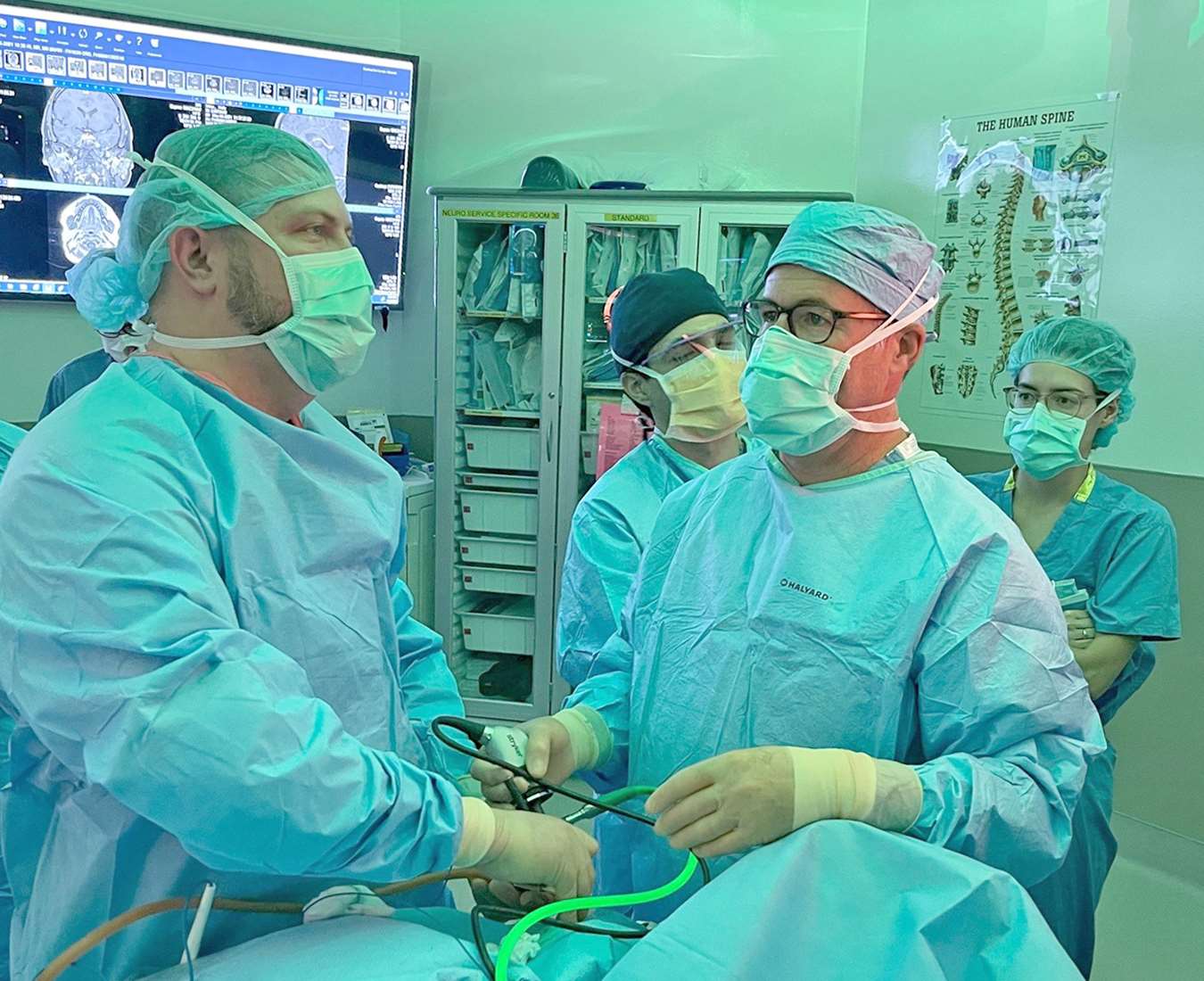 A New Key to Brain Surgery