Flight For Life and MCW Residents: Providing Care in the Air

It’s a common sound on the Milwaukee Regional Medical Center (MRMC) campus: the roaring engines of a Flight For Life helicopter blocking out ground noise as it lands swiftly atop Froedtert Hospital. For many who work at the Medical College of Wisconsin (MCW), the sound becomes so routine that all it elicits is a quick glance up, maybe not even more than a fleeting thought acknowledging the patient on board.

Air medical service is something few understand and most take for granted, but Timothy Lenz, MD, assistant professor of emergency medicine at MCW and director of medical services for Flight For Life, thinks that’s OK. “Flight For Life is a business, but I hope people never have to use it; I hope I never have to use it,” he says. “So I can see how people don’t understand what Flight entails.”

While the patient aboard a flight could be from a multitude of places – Flight For Life runs independently from its three bases and serves hospitals and patients throughout eastern Wisconsin and well into northern Illinois – the medical crew on board are all connected in some way to MCW. Most of the time, it’s because the paramedics and nurses have been trained in part at MCW’s STAR Center simulation lab by Dr. Lenz or his predecessor, M. Riccardo Colella, DO, MPH, associate professor of emergency medicine at MCW. But a few times a month, the partnership is even more pronounced when the two-person crew gains a third member: a second- or third-year resident from MCW’s department of emergency medicine.

Emergency medicine’s connection to Flight For Life is nothing new. Prior to 2008, shifts with Flight were standard procedure for residents as these young doctors were part of the nurse-physician crew model used at the Milwaukee-area base, then the helipad atop Froedtert Hospital. “Back then, Flight flew with a nurse and a resident during the day,” says Lenz. “The resident on call in the Froedtert emergency department handed over their cases to the attending physician and took the flight.” 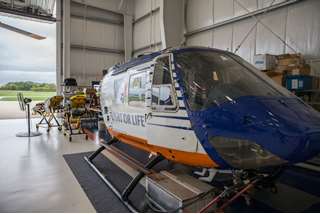 But then tragedy struck. 2008 saw 12 air ambulance helicopter crashes, including one involving Madison-based Med Flight. “Residents with us took a step back, and it became a turning point for the program,” says Leif Erickson, EMT-P, Flight For Life paramedic and clinical staff education coordinator. Like its two sister bases – one in Fond du Lac and the other in McHenry, Illinois – the standard crew for the Milwaukee area became a nurse-paramedic team; at about the same time, the Milwaukee base moved from the helipad to a hangar at Crites Field in Waukesha.

“What happened in Madison was an unfortunate incident, but it really allowed both us and MCW to take a look at how we do this, reconfigure and make it even better,” Erickson says.

MCW decided to maintain its residency partnership with Flight For Life, but now flying as a crew member is no longer a requirement but an elective longitudinal experience offered to residents. “With Dr. Colella and then going into Dr. Lenz’s leadership, we structured a resident program where we would get two – and now up to three – new residents every academic year,” says Erickson. For their second and third years of residency, those physicians trade two of their Froedtert emergency department shifts each month for 12-hour shifts with Flight, riding on calls from either the Waukesha or Fond du Lac base.

“It’s a win-win combination now,” says Erickson. “For our staff, we get involvement with the residents and MCW. And from the new physicians’ standpoint, they come into the residency program knowing they can get into air medicine if they want.”

And MCW’s partnership with Flight For Life is definitely a draw for many medical students when ranking emergency medicine residency programs. One such example is second-year resident Scott Kunkel, DO, who just began his Flight experience earlier this fall. Dr. Kunkel is a former Navy flight surgeon and was looking to continue his air medical experience as a civilian.

“I knew I wanted to do flight experience, so I definitely ranked more highly the residency programs that had one,” he says. “And I knew coming here that MCW had a strong emergency medical services and flight program, especially one that takes safety as such a priority as Flight For Life does.” 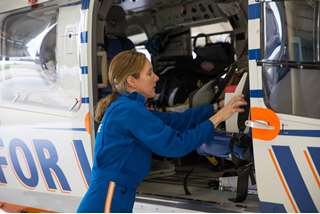 Once new residents like Dr. Kunkel go through their orientation and training, they become an active part of the team. “They eat with us, help us with the daily chores, help us with getting through the training, the helicopter checks in the morning,” Erickson says. The residents also take part in the Flight For Life crew’s regular quality assessment meetings and safety meetings. They can even sit with flight communications at the Waukesha base and follow the whole air medical process from the time a call is received for another base until the time it’s done.

But when a call comes to their base, it’s go time. “They’re not at Flight to observe; the residents are there to treat the patient as an equal member of the team,” Dr. Lenz emphasizes. About 40 percent of the time, those calls are to the scene of a trauma or accident, whether car, motorcycle, farm or other. This creates an entirely new experience for many of the residents, especially those with no prior involvement in emergency medical services (EMS).

“There are so many things going on that are oftentimes out of your control, whether bystanders or the helicopter itself or other patients who are injured,” says third-year resident John Pokorney, MD. “The thought process is different too because you don’t have as many resources or help as you did in the ER. The entire experience took some getting used to.” 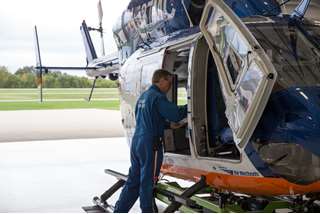 Erickson expects that type of reaction. “The residents are not used to being out in the elements in the middle of a cornfield extracting somebody, going to the helicopter, doing whatever is needed to stabilize the patient, whether intubating or hanging blood products in the field, all during a flight because that’s not typically done on scene; we’re doing it in route to the trauma center,” he notes.

Having the residents step outside the relatively controlled environment of the Froedtert emergency department is the goal, according to Dr. Lenz. “It gives them that experience of stabilizing a patient on the scene because a lot of times that’s the link to whether the patient is going to make it to the ER or not,” he says. “It’s one thing to manage a patient on the ground; it’s another thing when you’re in the helicopter and can’t hear your patient, you have headphones on, and the only way to communicate is back and forth via microphone with your team. It’s a whole different type of medicine.”

Jamie Aranda, MD, assistant professor of emergency medicine at MCW, did the Flight For Life elective during her MCW residency, and she believes those limitations were invaluable. “I learned a lot of leadership from that standpoint; it’s just you and two other people running the show,” she says. “It helped me grow as a doctor quickly in my second year of residency because it’s a steep learning curve where you have to gain a lot of maturity in your decision making; there’s no attending physician right next to you.”

Not that the residents are completely on their own; they regularly check in with the Froedtert ER attending physician during Flight transfers between healthcare facilities (which account for the other 60 percent of calls) and have access to Dr. Lenz. But their greatest asset is their crewmates. “We learn from experienced flight medics and nurses who have been doing this for a long time,” says Dr. Kunkel. 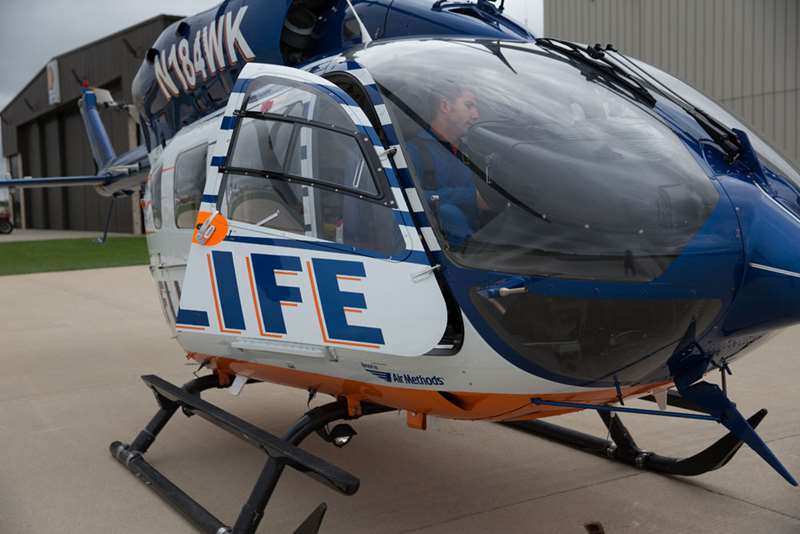 Learning on the Fly

Beyond medical skills, like dealing with difficult airway cases or severe cardiovascular emergencies, the calls provide the residents with a new perspective — and empathy for all EMS crews.

“It has had an effect on how I view cases coming into the emergency department,” says Dr. Pokorney. “I have a greater respect for the difficulties that a lot of times the prehospital teams are going through when they’re trying to manage patients.”

This is especially true with Flight For Life, whose crews handle the most critical patients in eastern Wisconsin, whether transferring them from the scene of an accident or from a small community hospital to a level I trauma center or specialty care team. “With Flight, we see extremely sick patients, both trauma and medical patients, that we would only see in the ER after they’re somewhat stabilized, for example, if we’re doing an intensive care unit transfer,” says Dr. Pokorney.

The transfers also provide insight into the world of medicine outside a major academic institution like Froedtert Hospital. Some of the community hospitals Flight For Life transports patients from have small staffs and few critical care nurses, Dr. Aranda notes; their resources are far more limited. And one day, the resident on the flight could be an attending in one of those community hospitals, as Dr. Aranda has seen with some of the residents she trained at MCW with.

“I think educating residents who are going to go out and work in the small community hospitals is really important,” says Dr. Aranda. “They’re the ones who are calling for transport and deciding to fly people, so I think having that knowledge from the partnership is really good.” 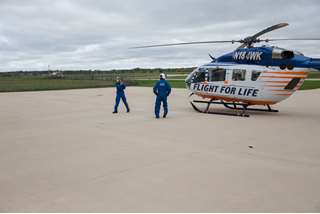 While the Flight For Life residency experience is an important teaching tool for MCW, the benefits are clear to the flight crews as well. “The residents are a great asset to the team,” says Linda Owens, RN, Flight For Life nurse. “They add another perspective with the experience they’re coming in with.”

After all, notes Erickson, the residents are getting the most recent medical training. “They’re the resource for us if we have a question about a new medication or a new procedure or something that didn’t go just right on a flight — whether the resident was with us or not,” he says.

In addition to sharing knowledge, the relationships built are important to the Flight For Life crews. “One day we might be flying with a resident, and the next day we’re bringing a patient to them in the emergency department,” says John Schindler, EMT-P, FP-C, Flight For Life paramedic. “They know who we are personally; we know them. And as we’re going on, we’re asking them a lot of questions, so it’s a great synergy.”

Erickson agrees. “I would even say we build friendships that last a long time,” he says. “I think this is the benefit of Flight being involved with MCW.”

“Overall, it’s just a great opportunity,” says Dr. Kunkel. “The Flight crews like talking to us and learning from us, and we like learning from them. So it’s really a symbiotic relationship.”

And that relationship is worth acknowledging whenever people on the ground hear the roaring engines of a Flight For Life helicopter overhead, concludes Dr. Pokorney. “We’re working with the best pilots, nurses and paramedics to take care of the sickest patients in eastern Wisconsin,” he reflects. “We’re the ones initially seeing these people and stabilizing them. I think that’s a pretty awesome thing to say, and it shows how great Flight is overall – that the crews are successfully caring for these patients and letting us as residents be a part of that care.” 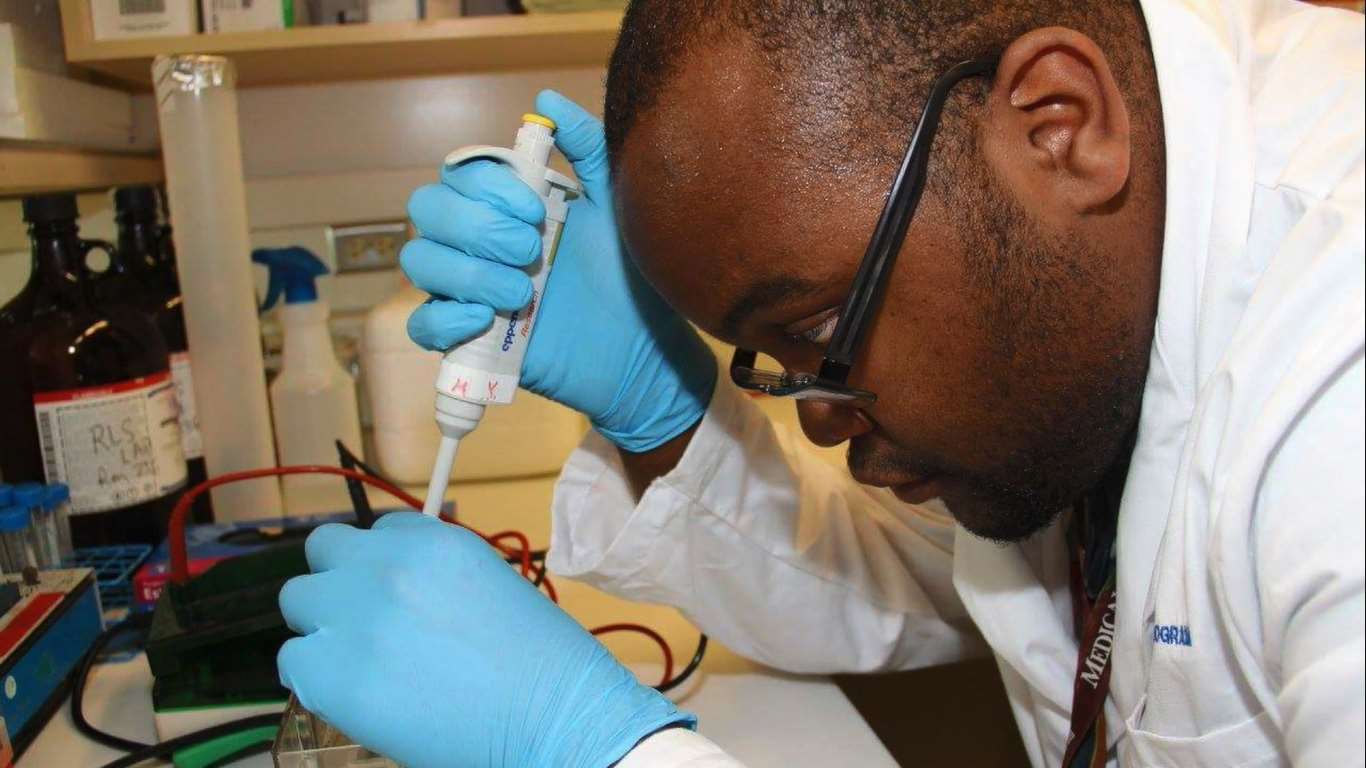 A young man who searched for a way to serve his community finds his calling.

In the wake of the global pandemic, MCW faculty, staff and students are reimagining how they provide care and services.

While most are staying “Safer at Home,” our frontline employees are still coming to campus to provide vital care to our community.