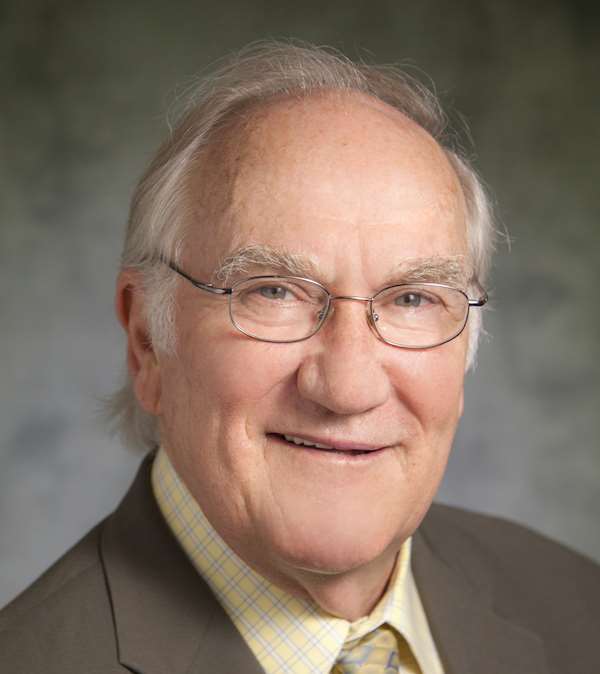 After postdoctoral work at Columbia University College of Physicians and Surgeons, Dr. Besharse joined the faculty at Emory University School of Medicine and became a full professor of Cell Biology in 1984. From 1997 until 2016, he served as chair of MCW’s Department of Cell Biology, Neurobiology and Anatomy, and assumed his current role as director of research at the Eye Institute in 2015. His research has focused on the cell biology of photoreceptor membrane trafficking, photoreceptor disc shedding, retinal pigment epithelium phagocytosis and regulation by circadian clocks. His laboratory demonstrated that the retina and photoreceptors are independent circadian oscillators and that photoreceptor membrane trafficking is controlled through intraflagellar transport, a conserved pathway in virtually all cilia and flagella. The latter work highlights the frequent association of photoreceptor degenerations with syndromic diseases associated with cilia. His current interests are in the role of ciliogenesis defects and circadian clocks in retinal diseases. This includes a particular focus on hereditary photoreceptor degeneration, macular degeneration and ciliopathies.

The 2016 ARVO highlight for MCW was the Proctor Medal lecture, given on May 2 by Joseph C. Besharse, PhD. The Proctor Medal, one of ARVO’s most prestigious honors, recognizes excellence in the basic or clinical sciences as applied to ophthalmology.
Besharse Distinguished Service Award MCW 2015
Besharse MCW Vitality Award
Besharse Dean's Senior Leader Spotlight 2014

NIH/NEI T32 EY014537-11-15, J C Besharse (PI), Research Training Program in Vision Science
This is a training grant in vision science for a group of senior and mid-level investigators, with active and competitive research programs funded through the National Eye Institute. The objective is to prepare trainees at the pre-doctoral level for research careers in ocular and vision research.

The current major focus of the laboratory is the role of ciliogenesis defects and circadian clocks in retinal diseases. This includes a particular focus on hereditary photoreceptor degeneration, macular degeneration and ciliopathies. 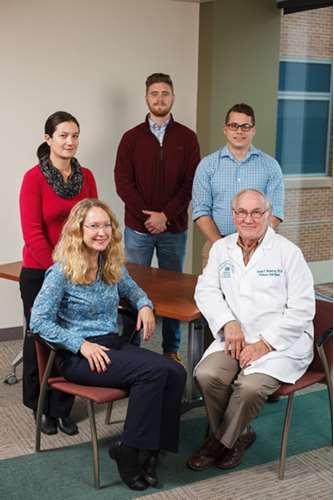 “All of your organs have clocks — your liver, your heart, your kidneys all have their own internal clocks. And the big secret is how you mesh them all together and synchronize them so they work together instead of against each other."
--Dr. Besharse 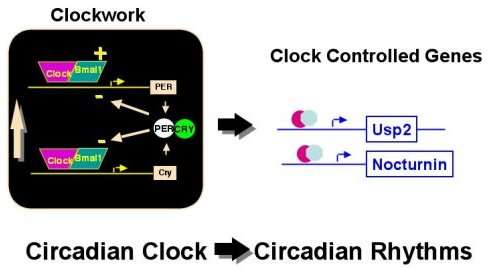 Trafficking of Phototransduction Components in Photoreceptors

Turnover of photosensitive membrane throughout the life of a photoreceptor depends on maintenance of a delicate balance between photosensitive membrane assembly and degradation. These events are controlled by circadian clocks (see above). Both protein and lipid components are synthesized in the cell body and transported vectorially to the region of the sensory cilium where phototransduction organelle is assembled. The cilium is important in the transport of macromolecules from sites of synthesis in the cell body to the region of membrane assembly and in the morphogenesis of flattened discs.

Our current work is directed at a model called intraflagellar transport (IFT) in which microtubule based motors (dynein and kinesin) move protein complexes along microtubule tracks into and out of the cilium (see Figure 2). The IFT model is thought to apply to all motile and sensory cilium structures among the eukaryotes; IFT proteins are required for cilium assembly and are found widely in both motile and sensory cilia.

Figure 2. The components of intraflagellar transport as revealed in the green alga, Chlamydomonas.

Recent work in mice carrying mutations in genes encoding the kinesin II motor and the IFT complex protein, IFT88, demonstrate that this pathway is required for assembly of the phototransduction system in photoreceptors (see Figure 3).

Research in this laboratory is directed at organization of the IFT protein complex and its physical interaction with both cell specific cargo and with microtubule based motor proteins. 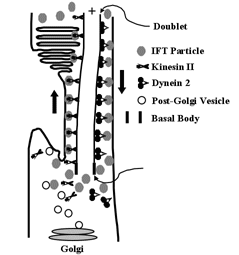 Figure 3. A model for intraflagellar transport in photoreceptors based on work of Pazour, et al., 2002. 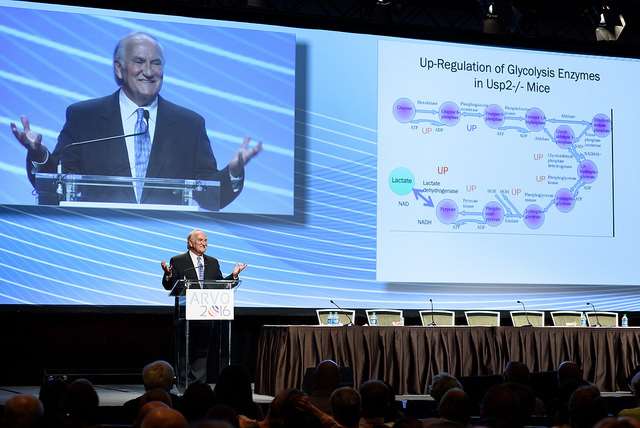 The 2016 ARVO highlight for MCW was the Proctor Medal lecture, given on May 2 by Joseph C. Besharse, PhD. The Proctor Medal, one of ARVO’s most prestigious honors, recognizes excellence in the basic or clinical sciences as applied to ophthalmology. 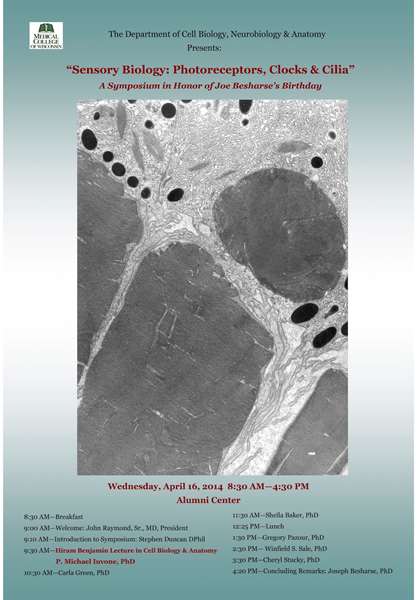