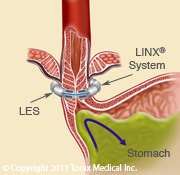 Surgeons in the GERD and Gastrointestinal Surgery Program are the first in the area to offer a brand new, innovative device designed to treat gastroesophageal reflux disease (GERD) – the LINX® reflux management system. The LINX system is a small flexible band of interlinked titanium beads with magnetic cores designed to restore the body’s natural barrier to reflux in patients with GERD.

Surgeons who specialize in the management of gastroesophageal reflux disease (GERD) at the Medical College of Wisconsin are the first in the area to offer treatment with an innovative device designed to treat GERD.

What is it? The LINX® Reflux Management System (LINX device) consists of a series of titanium beads, each with a magnetic core, connected together with titanium wires to form a ring shape. The LINX device is surgically implanted around the lower end of the esophagus. It is used to treat gastroesophageal reflux disease (GERD) in patients who continue to have GERD symptoms despite the use of medical therapy (acid pills such as proton pump inhibitor medications) for the treatment of their reflux. 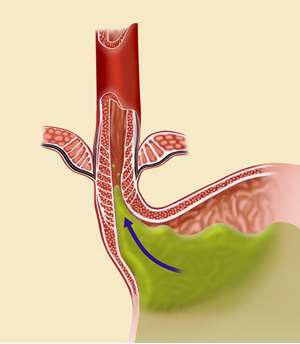 How does it work? The LINX device is implanted around the lower esophageal sphincter (a sphincter is a muscle that surrounds and closes a bodily opening) to strengthen a weak sphincter. Using the device helps to prevent the contents of the stomach from backing up into the esophagus (reflux). By restricting the flow of stomach contents into the esophagus, the patient will improve their heartburn symptoms and reflux (regurgitation) and may no longer require medicines to treat these symptoms.

When is it used? The LINX device is used in patients who continue to have symptoms of GERD, such as heartburn and reflux, despite maximum medical therapy (daily use of medicines such as proton pump inhibitors). It is intended to be used in patients who would also be considered candidates for anti-reflux surgery.

What will it accomplish? The LINX device will help prevent abnormal amounts of acid from the stomach moving back into the esophagus. A growing body of literature supports the safety, efficacy, and long-term durability of this treatment. In a recently published 5-year follow-up of the patients who had a LINX device implanted as a part of the FDA trial, there were no device erosions, migrations, or malfunctions noted. Control of GERD symptoms was excellent with regurgitation reported in only 1% of patients at 5 years. All patients reported the preserved ability to belch and vomit if needed. Bothersome dysphagia (difficulty swallowing) was present in 5% prior to surgery and 6% at 5 years ("Long-term Outcomes of Patients Receiving a Magnetic Sphincter Augmentation Device for Gastroesophageal Reflux"). 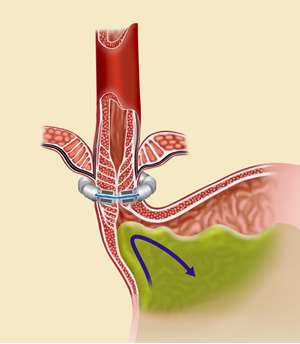 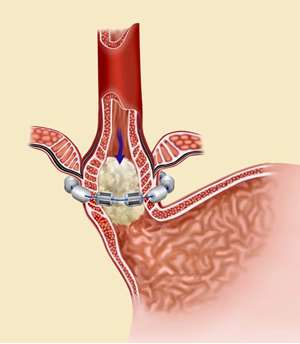 Patients who have the LINX device should not be exposed to, or undergo, an MRI (Magnetic Resonance Imaging) in a magnet more powerful than 1.5 Tesla for the current version of the device. Exposure to the more powerful MRI could cause serious injury to the patient and the device may be damaged.

For more information on the LINX device, follow these links:

all
How long am I in the hospital?
Most patients are discharged the same day as their procedure.
Where is the incision made?
For the LINX procedure, there are 4-5 tiny laparoscopic incisions required. Most of these incisions are underneath the rib cage in the upper abdomen. Most of the incisions are 5-mm (1/2 cm). A necessary single 1-cm incision will be made.
How do I know if I qualify for surgery?
We will be happy to schedule an appointment with Dr. Gould to determine if the LINX system is the best surgical approach for you and your GERD. If you have had any tests performed to evaluate your gastroesophageal reflux (an endoscopy, a pH study, or an esophageal manometry for example), please arrange for a copy of these records to be faxed to our office ahead of your visit. You may choose to hand carry a copy of these records with you to your appointment as well. At your appointment, Dr. Gould and his staff will review your history and any testing you have had done to determine if additional testing is necessary and if you are a candidate for the LINX device.
How do I get this approved by my insurance?
Once the recommendation is made to have the LINX system placed, we will obtain prior authorization for surgery. Once submitted, your insurance company will review your case and notify us of a decision 3-4 weeks following initial submission. (As this is a new FDA approved device, some insurance companies may at first decline to provide benefits. We have protocols and resources in place designed to aid us in the appeal process.)

The Society of American Gastrointestinal and Endoscopic Surgeons (SAGES), whose mission is to improve quality patient care through education, research, innovation and leadership in gastrointestinal and endoscopic surgery, just completed a safety and effectiveness analysis of the LINX Reflux Management System. On the basis of the available evidence, they concluded that “the LINX device should be an option available to patients and providers for the management of medically refractory GERD”. Learn more about the LINX® Reflux Management System.
What if my insurance won't pay?
Unfortunately, some insurance companies will refuse to pay for the LINX procedure even when your surgeon determines that the procedure is medically necessary and appropriate. Froedtert & the Medical College of Wisconsin have worked out a discounted, self-pay package for these patients. If this applies to you, please contact us and we will provide you with a package price.