The 2022 Commencement Ceremony at the Medical College of Wisconsin Green Bay (MCW-Green Bay) campus was a celebration filled with happiness for achieving a long-desired goal and excited anticipation about the future. But this year’s event was especially noteworthy. This class, MCW-Green Bay’s fifth, included its 100th graduating physician.

The ceremony also marked the 10th anniversary of MCW unveiling its vision for new regional campuses in central Wisconsin and Green Bay. This historic milestone represented the first new medical school campuses to open in Wisconsin in more than 100 years. Matthew Wheeler, MD ’18, GME ’21, a member of MCW-Green Bay’s inaugural graduating class, returned to his alma mater to deliver the alumni commencement speech. He noted that MCW-Green Bay alumni were about to be spread across 15 states and 12 specialties. “Who would have thought,” he asked, “from the seed of an idea that such a widespread reach would be possible?”

That seed was planted in response to a looming crisis. A 2011 Wisconsin Hospital Association report estimated a shortfall of 2,000 doctors in the state by 2030 if 100 physician vacancies weren’t filled each year. This deficit would especially limit access to health care services in rural communities where the population tends to be older and communities have fewer health care providers. MCW proactively addressed the dilemma in 2012, announcing the establishment of its regional campus in Green Bay. Not only did the area have the necessary resources, but according to Matthew Hunsaker, MD, founding dean of MCW-Green Bay, there also was a core group of local public and private sector partners that provided “ideas, enthusiasm, commitment and most importantly a ‘can-do’ attitude.”

Larry Weyers, retired president and CEO of Wisconsin Public Service Corporation and a member of the Green Bay Packers executive committee, was one of those early advocates. As a member of MCW-Green Bay’s inaugural Community Advisory Board, Weyers lent his business acumen and community knowledge to help raise funds and facilitate connections with other local partners. Recently he said the school was “probably the best thing to happen to Green Bay and northeast Wisconsin since the Packers located here!” MCW alumnus Ashok Rai, MD ’97, was another early stakeholder. As president and CEO of Green Bay-based Prevea Health, he invested the strength of that thriving health system to help build the school, believing they were "in the right place at the right time to do a model like this."

In a 2019 interview, Dr. Hunsaker indicated the campus’s goal has always been to “grow our own physicians who will want to live and work in rural Wisconsin.” With the graduation of the campus’ 100th doctor, Wisconsinites are already enjoying the fruits of MCW-Green Bay’s innovative program. Thus far, nearly 40 percent of MCW-Green Bay graduates have stayed in Wisconsin for their residencies, and the school has made a concerted effort to build the number of in-state residencies, adding two new opportunities for 2022 graduates. 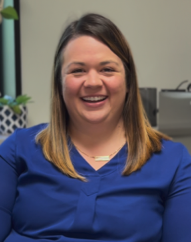 Five graduates from the inaugural Class of 2018 now practice in Wisconsin. In fact, Dr. Wheeler and his classmate Martha Grace Courtright, MD ’18, GME ’21, (pictured left), work together in Hayward, a city in northwest Wisconsin. They and their families became friends during medical school, and with their shared interests and visions for their career paths, they served their residencies together. When the time came to look for jobs, they decided to continue their partnership and only interviewed at places that had two job openings. They ultimately landed in Hayward where they could practice “full-spectrum medicine.”

“So far it’s been everything we’d been envisioning,” Dr. Courtright says. They deliver babies, provide clinical care and offer nursing home rounds and in-patient rounds. “It’s a lot of work, but there’s also a lot of benefit to being here.”

Fellow alum Matthew Jenson, MD ’18, GME ’21, likewise wanted the opportunity to treat as many conditions as he could, or “be a one-stop shop.” He currently has a family practice in Green Bay and takes pride in “being someone’s doctor, not just a specialist.” 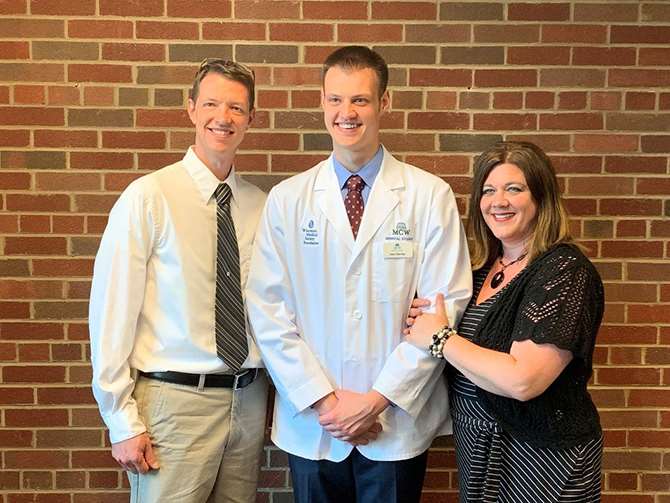 It's clear MCW-Green Bay will continue achieving its vision for years to come. Jake Deviley, MD, (pictured right), a 2022 graduate, is excited to stay in Wisconsin for his residency and looks forward to one day practicing in the state. “This will best prepare me to treat the ailments that affect all patients, but even more so those specific to patients in the Midwest,” he shares.

Fellow 2022 graduate Katie Sonnentag, MD, leaves no doubt about her future. “I was born and raised, attended college, and worked during my gap years in Wisconsin, so it is safe to say that I love this state,” she says. “I plan to stay in Wisconsin after residency to practice, so there is no better place to learn how to take care of the people of Wisconsin than here.”

To realize the campus’s ambitious vision, scholarship support continues to be a top priority for MCW-Green Bay. The difference this philanthropy can make in a student’s life is enormous. Dr. Wheeler received a scholarship, and he was truly “grateful for such a huge leap of faith in me, because … I came from such an atypical background. It gave me that extra incentive to say, ‘This is my school.’” Class of 2022 graduate Rima Datunarachchi, MD, had the great honor of receiving a Rural Practitioner Scholarship. She grew up in rural areas in her native Russia and in Wisconsin and “witnessed the many challenges that people face to access medical care.” She expressed her deepest gratitude to her benefactors for the scholarship that tremendously supported her educational journey.

The historic milestone of graduating MCW-Green Bay’s 100th doctor would not have been possible without the leadership, advocacy and support of many community partners, including Dr. Rai, who graciously accepted an honorary degree at this year’s Commencement Ceremony. As he shared with the graduating class, the “seed” of MCW-Green Bay – the ability to train physicians locally and encourage them to practice in Wisconsin – “was the collective hope and dream of not only myself, but of health care leaders and educators across this state and especially across this region.” He implored the graduates to use their skills and training to recognize the impact of their words on future patients, to connect and “figuratively wrap your arms around them,” and to not just practice medicine but lead it. “Even if you can inspire change at the smallest level,” he concluded, “you can and you will make a difference for your practice, your partners and your patients.” 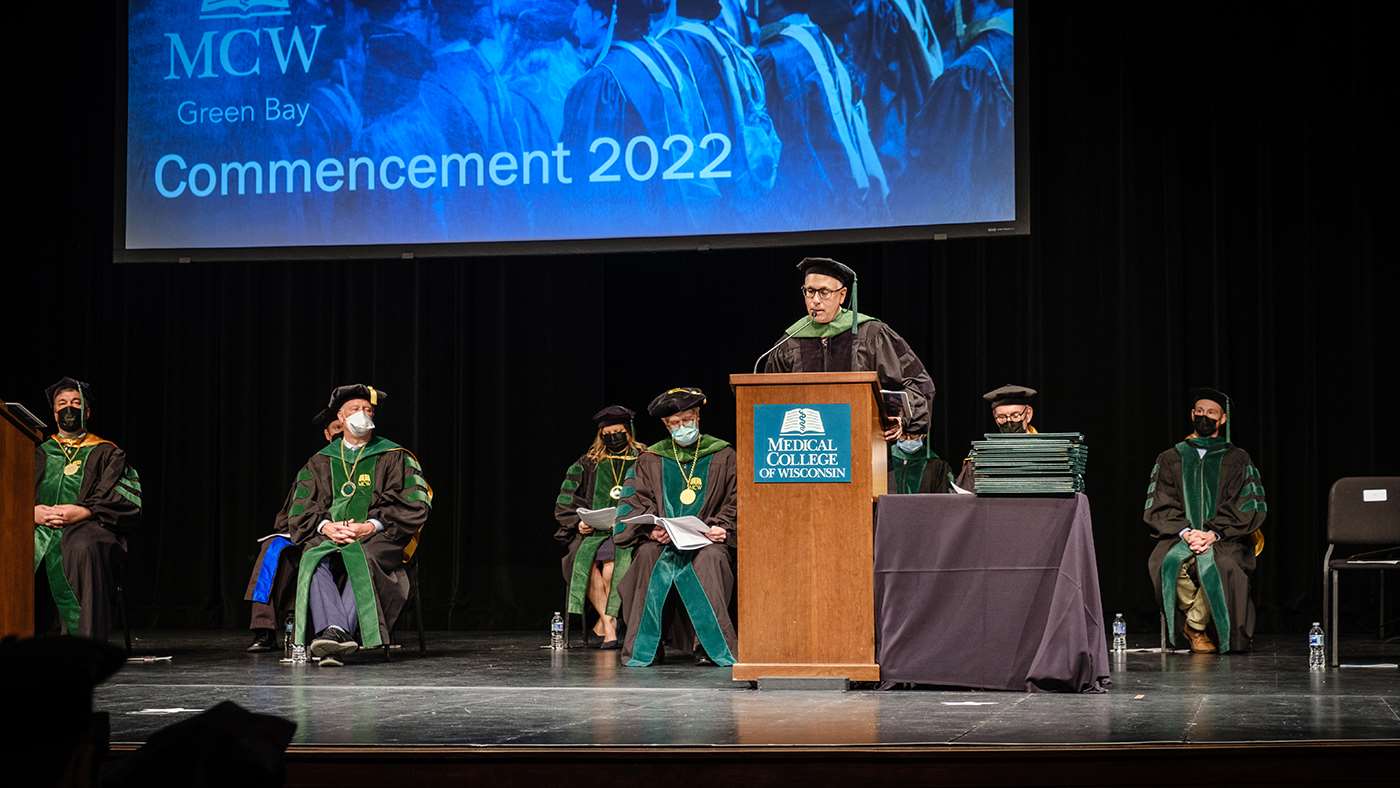 The 2022 ceremony was a chance to celebrate what Dr. Rai called “a dream come true not only for Green Bay and its surrounding communities, but for all the lives that the students will undoubtedly impact.” The numbers, as the saying goes, don’t lie. With 100+ doctors now in the “pipeline” and hundreds more who will join them in the years to come, MCW-Green Bay has been and will continue to be a resounding success.