Ryan Schaller was a fit, active and healthy 31-year-old when he was diagnosed with esophageal cancer in October 2019. At the time, Ryan and his wife, Alyssa, had an 18-month-old daughter and Alyssa was 34 weeks pregnant with their son.

Esophageal cancer represents only about 1 percent of all cancer cases annually yet accounts for 2.6 percent of deaths due to its low five-year survival rate, according to the National Cancer Institute. The American Cancer Society notes that better treatments have improved survival rates from about five percent in the 1960s and 1970s to 20 percent today.

Ryan’s treatment over the next several months would involve chemotherapy, radiation and eventually surgery. He could not eat or swallow due to the tumor obstructing his esophagus and the pain caused by the radiation. 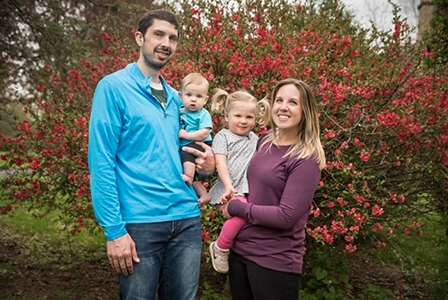 In April 2020, Ryan had surgery to remove the part of his esophagus that had the tumor in it. To make an already frightening situation worse, this was during the beginning of the COVID-19 shutdown, which meant Alyssa was unable to be by his side for his surgery or his recovery. She relied on what the doctors would tell Ryan when she talked to him on the phone. The important thing was that the surgery had been a success.

For a while, things in their lives showed every sign of returning to normal. Until the cancer came back.

On July 31 of that year, on Ryan’s 32nd birthday, they discovered that the cancer had spread to his brain and his spinal fluid – a condition called leptomeningeal disease. With this devastating news, Alyssa and Ryan met with Joseph Bovi, MD, GME ’07, Medical College of Wisconsin (MCW) professor of radiation oncology and neurosurgery. Alyssa now describes him as “one of my absolute favorite doctors, favorite people, in the world.”

Ryan went through several intensive radiation sessions on his brain and his spinal fluid. The radiation appeared to be working for a couple weeks, but then Ryan’s pain became so unbearable that he could not stand or walk. An MRI confirmed that his cancer was spreading at an alarming rate. This heartbreaking news confirmed that there was nothing more that could be done for Ryan.

During such an unthinkable time, Alyssa was grateful for the team at Froedtert Hospital. “Our doctors were beyond wonderful,” she says. “They were so supportive. We explained that he wanted to be able to see his kids and we weren’t exactly sure how to do that because of COVID, and no place was letting kids in, but they were able to get our kids in to see him in the hospital. The child life specialist there was amazing. She brought toys and blankets and gave Ryan a clean shirt to wear with snaps on the sides.” This was to avoid interfering with the various sorts of medical apparatus in place. “They made it seem like less of a hospital,” Alyssa says. Even though it was only for about an hour, Ryan got to be with his two kids.

The doctors at Froedtert Hospital also helped Alyssa pick out a hospice – something she never thought she would have to do at the age of 31. “They were able to bring in people from these hospices to talk to us and give us information about things like their visitor policies,” Alyssa shares. “They helped us pick out a wonderful one.”

Alyssa gets emotional when remembering the intimate moments of compassion and kindness. “When my husband was getting wheeled out of the hospital room to go to hospice, a nurse in the room came up to me and asked if she could hug me,” she recalls, also mentioning that this was happening during the height of COVID-19 and social distancing was at the forefront of cautionary measures. “My response was ‘Can you please hug me?’ That’s something you don’t ever forget. They were phenomenal.” 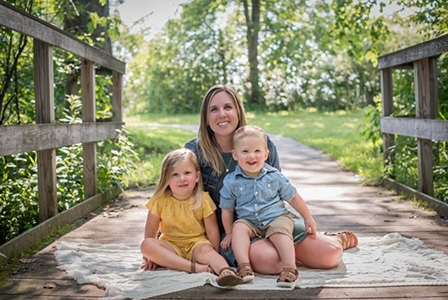 Once Ryan was transferred to hospice, managing his pain became the most important consideration to address. “Froedtert Hospital got his pain under control,” Alyssa says, “which was the main goal. He was in so much pain. The doctors, the palliative care team, they all worked so hard, they tried everything.”

Ryan was transferred to hospice on a Friday. On the following Friday, he passed away. He was 32 years old.

Alyssa explained that while she was fortunate enough to have a strong support system of family and friends close at hand “who really stepped up to the plate” for her, she still felt alone. “Because he was my person,” she says.

When asked what advice she might have for others, Alyssa’s states it plainly: “Having gone through this and talking with other people who are going through it, there are never the right words to say.” She also says that shouldn’t stop the people who care from trying to help. “Find those people who understand what you’re going through. Find those people that will let you be alone without being alone. And if you don’t have those people in your life that you think you can lean on, talk to someone from Froedtert because they will find them for you. I can’t tell you how many people from Froedtert asked me if I needed a therapist or a counselor.”

It might seem counterintuitive to think that Alyssa would come away from this feeling any sense of gratitude at all. She could very easily try to put this pain behind her in any way she could, but she decided instead to create the Ryan M. Schaller (RMS) Foundation. 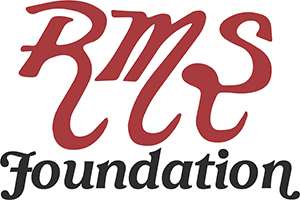 “The goals of the foundation are twofold,” Alyssa says. “The first is to provide donations to cancer research, whether it be esophageal cancer or leptomeningeal disease specifically, because it’s such an under-researched area. I didn’t realize that until after my husband passed away.”

She contacted Dr. Bovi about it and asked why there wasn’t more research on this and when he told her there simply wasn’t, she said, “I don’t accept this. It’s not OK. If there had been more research, what happened to my husband may have turned out the same way, but if I can get any sort of advancement in the area that gets someone even one more hour, day or week with their loved one – that’s the goal.”

Along with research, the RMS Foundation focuses on supporting patients and their loved ones. “I want to provide any form of support, whether that be financial or whatever support a family might need as they’re going through this fight,” shares Alyssa. “I don’t want people to feel alone. I don’t want anyone to have to go through what I went through, and I always had the best people around me.”

In their first six months of operation, the RMS Foundation raised almost $30,000. This year, the foundation hosted a beer tasting event in April to honor Esophageal Awareness Month and Ryan’s love for trying new beers. A golf outing benefit in July will celebrate Ryan’s birthday. In October, the foundation will hold the second “Run for Ryan,” a 32-mile virtual challenge during the entire month. Last year’s Run for Ryan had more than 400 participants and raised more than $17,000.

“The challenge is to run 32 miles as a tribute to the 32 years of Ryan’s life,” Alyssa says. “The month of October was the month he was diagnosed, it was the month when we lost him, it just has a lot of meaning. Anybody who knew Ryan took something from it, whether it was big or small. Anything to keep his legacy alive.”

Last holiday season, the RMS Foundation hosted a “Season of Giving,” which donated approximately $10,000 to multiple families who were battling cancer or a traumatic time in their lives.

In December 2021, the RMS Foundation gave a generous donation to MCW to advance neuro-oncology research and additional patient support in the MCW Department of Radiation Oncology. As Alyssa shares, “It was only fitting that the foundation’s largest donation to date went directly to support the research and advancement of the team who treated Ryan.” Alyssa and the board of directors presented this gift to Dr. Bovi, Lindsay Puckett, MD, assistant professor of radiation oncology, and Jennifer Connelly, MD ’03, GME ’08, FEL ’09, associate professor of neurology – three remarkable clinicians who cared for Ryan. This special meeting also included Carrie Brausch, nurse manager for the Hope Clinic in the Froedtert Hospital Clinical Cancer Center, and Mike Straza, MD, GME ’17, PhD, assistant professor of radiation oncology. 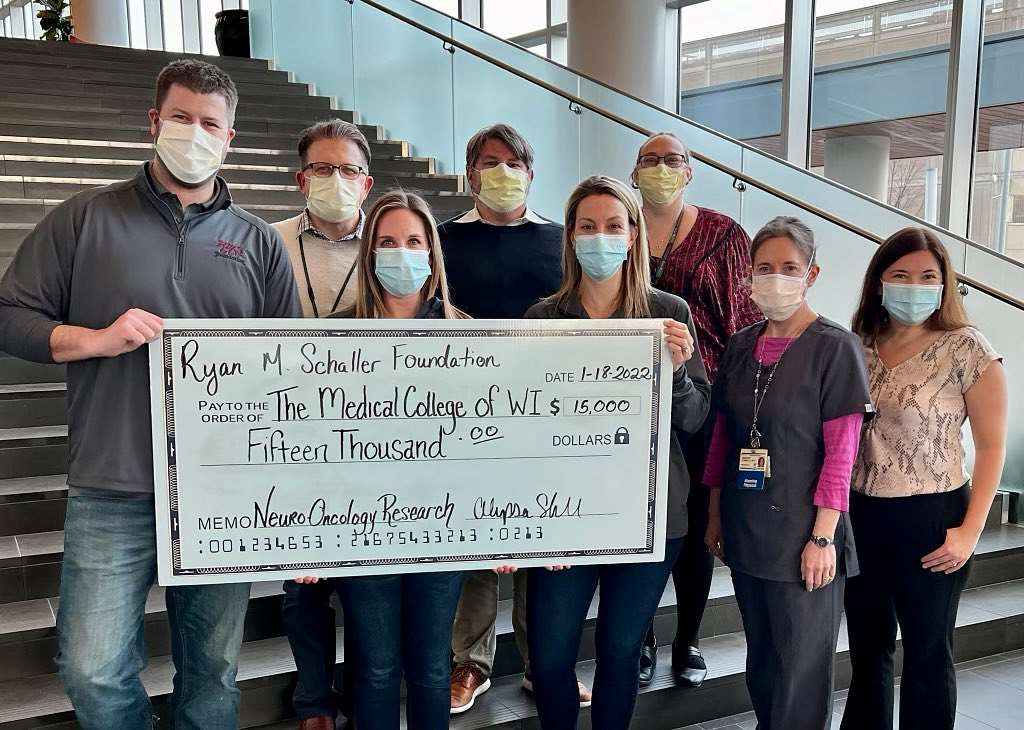 As she honors her husband’s legacy, Alyssa is grateful for those who have supported her foundation and her inspirational vision. “I’ve met some of the most amazing people through all of this,” Alyssa says. “Wonderful people who Ryan impacted, people that really care. If we can help even one family, our job is done. If we can make anyone’s journey even a little bit better, that’s enough. I’m really hoping that we can do that.”