Lt. Colonel Nathan Carlson, MD, has experienced a great deal during his 16 years of active duty in the U.S. Army. Dr. Carlson, currently a U.S. Army general surgeon, has been deployed to Afghanistan four times and to Iraq once. Yet even a seasoned veteran with combat experience has been able to benefit greatly from a military-civilian partnership that pairs Army medical personnel with civilian medical providers to treat patients at hospitals on the Milwaukee Regional Medical Center (MRMC) campus.

Dr. Carlson and other Army personnel are participants in an initiative falling under MCW’s Joining Forces Program, designed to increase the clinical readiness of Army providers and credentialed staff by providing real-world experience caring for critically ill and severely injured patients. The program facilitates the sustainment of clinical proficiency and sharing of knowledge, which supports the objectives of the Medical College of Wisconsin (MCW) Comprehensive Injury Center and the Army to prevent deaths from injury, both in the community and on the battlefield.

“There’s just nowhere else you’re going to get the experience you need to be able to take care of injured soldiers other than at an academic medical center with Level I Trauma Centers,” says Dr. Carlson, explaining that the soldiers and their families cared for in Army treatment facilities are an extremely healthy population. “It’s difficult to come by serious and complex patients you need to hone those skills that will be useful for combat surgery on the battlefield.”

Unfortunately, there is a high volume of traumatic injuries in the Milwaukee area due to gunshots, vehicle crashes and other incidents, according to Andrew Eades, program manager for MCW’s Joining Forces and a Marine Corps Veteran. The Froedtert & the Medical College of Wisconsin adult Level I Trauma Center at Froedtert Hospital had more than 3,200 admissions with more than 2,800 trauma activations in 2021 alone.

Marc de Moya, MD, chief of trauma/acute care surgery and lead surgeon for the military-civilian partnership at MCW, says, “There is a natural relationship and bidirectional benefit between a busy civilian Level I Trauma Center and maintaining readiness for combat casualty care.”

Dr. Carlson, who has completed more than 430 surgeries during the program, agrees.

“There has certainly been a number of patients here who had severe injuries similar to what combat trauma looks like,” he shares.

Launched in 2019, MCW’s Joining Forces Program has three training initiatives with Army organizations. One is the U.S. Army Medical Department (AMEDD) Military-Civilian Trauma Team Training Initiative (AMCT3). AMCT3 is implemented through a partnership between MCW and the Office of the Army Surgeon General. The AMCT3 Army team includes Dr. Carlson, a general surgeon, a thoracic surgeon, a certified registered nurse anesthetist, an emergency medicine nurse, a critical care nurse and an operating nurse. AMCT3 personnel are assigned to work full time at MCW for up to three years. While the intent of the AMCT3 program is to have a fully embedded forward resuscitative and surgical detachment (FRSD) team, MCW is currently supporting individual U.S. Army surgeons through the Joining Forces Program. 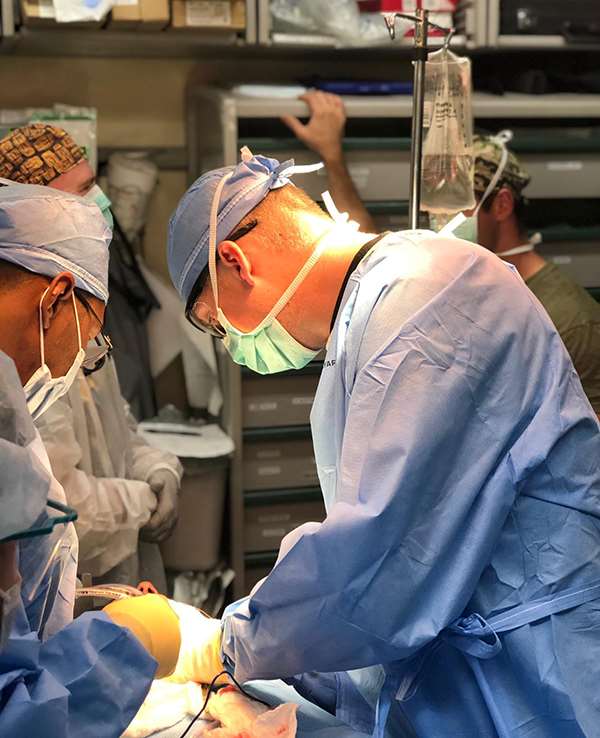 MCW’s Joining Forces Program was created to align with Department of Defense initiatives to develop U.S. Army-civilian partnerships that enable U.S. Army providers and credentialed staff from different branches of service to integrate into different trauma centers and hospitals throughout the U.S., Eades says.

MCW is among a handful of sites nationally that currently has Army surgeons embedded and working full time in their facilities, he adds.

Eades says saving lives here prepares Army medical personnel for situations abroad, when they are called on to stabilize and save the life of a soldier who is injured, and he describes the program as a win-win for both the U.S. Army and for MCW.

“It brings these highly trained doctors, nurses and nurse practitioners to work with patients here, and it also helps the U.S. Army personnel to maintain their high level of care that they provide while they’re deployed,” he says.

For Dr. Carlson, who became involved with the military right after high school, the program wasn’t his first time on campus. He received medical training at MCW between deployments and is also working again with Lewis Somberg, MD, a retired colonel with over 30 years of military experience. Dr. Somberg, an MCW professor who specializes in trauma surgery, critical care, acute and general surgery, was Dr. Carlson’s commander when he was part of a forward surgical team out of Madison.

“To be working with Dr. Somberg again is pretty remarkable,” Dr. Carlson says.

He also adds that even when paired with personnel who don’t have military experience, they all have the same approach.

“We’re all practicing based off of the same ATLS (advanced trauma life support) principles, which is kind of why you can plug people in,” he notes.

Both Dr. Carlson and Eades believe that while the Army has partnered with civilian medical centers for decades, specialized programs like MCW Joining Forces that facilitate the assignment of Army trauma team personnel to civilian hospitals will continue to grow in the future all across the U.S.

“This is just a great program that allows critical thinking, the honing of critical life-saving skills and thinking outside the box before they actually get deployed,” Eades says. “It’s just such a rare opportunity that we have here to support U.S. Army readiness.”