More Than One Way to Get to the Super Bowl

Winning the Super Bowl is the goal of every NFL team, but as every player, coach and football fan knows, it’s extremely difficult to reach the top. It takes a complete team effort. Offense, defense and special teams must peak at just the right time. The coaching staff and front office personnel make crucial roster decisions, and the medical staff help players overcome sports injuries, protecting their long-term health. That’s where Wisconsin native and Medical College of Wisconsin (MCW) alumnus Casey Batten, MD ’03, comes in. He has served as the lead medical team physician for the Los Angeles Rams since 2016, and with the Rams’ recent victory in Super Bowl LVI, he has already been sized for what is sure to be a spectacular Super Bowl ring.

Dr. Batten’s gravitation toward sports medicine was a natural progression. While attending Madison Memorial High School, he played football and participated in track and field. He then then went on to study exercise science and kinesiology at the University of Wisconsin-Madison. After graduation, Dr. Batten wasn’t sure what his next step would be. He mulled over teaching or a career in physical therapy, but friends convinced him to consider medical school.

He applied and was accepted to MCW, which was the ideal spot for him. Dr. Batten says the vibe at MCW was, “Congratulations, you’ve earned this. Welcome. What can we do to help you reach your goals?”

Looking back, Dr. Batten singles out Mark W. Niedfeldt, MD ’92, GME ’95 (former MCW faculty), Craig C. Young, MD, professor of orthopaedic surgery and community & family medicine, and Carole S. Vetter, MD ’93, GME ’98, professor of orthopaedic surgery, as particularly helpful mentors. Dr. Young works with teams such as the Milwaukee Brewers, the US Snowboard Team, and the US Ski Team, while Dr. Vetter serves as team physician for the US Speedskating Team and the Milwaukee Bucks. They not only sparked Dr. Batten’s interest in primary care sports medicine but also educated him on the breadth of services the field provided and shared contacts to help get his foot in the door as a sports medicine specialist.

After medical school, Dr. Batten completed his residency at the University of Tennessee, where he enjoyed a unique opportunity to get “involved in the trenches” of collegiate sports. He conducted physicals, helped with the training room, covered games and traveled with the university’s football team. Dr. Batten then moved on to a sports medicine fellowship conducted jointly at the University of California, Davis and Berkeley campuses. In 2007, he became assistant team physician at the University of California, Berkeley and was named head team physician four years later. He was really “in the trenches” at UC Berkeley. Beyond his clinical work, research and administrative duties, Dr. Batten directed nutritionists, strength coaches and athletic trainers for the university’s 900 student-athletes participating in 32 different sports.

A Move to the NFL 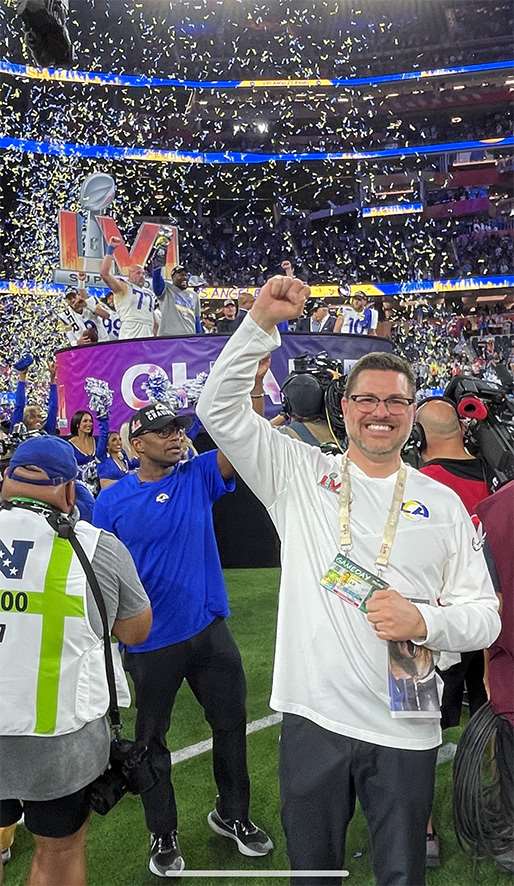 And then the Rams called in 2016. The team had recently returned to Los Angeles after a 20-year stint in St. Louis and was looking for an experienced lead medical team physician. Dr. Batten wasn’t looking to leave his collegiate role, but the Rams job and the opportunity to be the first primary care sports medicine physician at Cedars Sinai Kerlan-Jobe Institute, one of the country’s most prestigious sports medicine facilities, was too good to pass up. So he and his family took the plunge and moved to Southern California.

From the beginning, Dr. Batten’s work with the Rams was a great collaborative experience with everyone “working toward the same goal and supporting each other.” The team from the top down, Dr. Batten adds, “really cares about the players on and off the football field. I couldn’t be prouder of working with such a great organization and medical team.”

The Rams battled through the postseason to represent the NFC in the 2022 Super Bowl. The team followed its usual preparation routine the week before the game and enjoyed being able to practice on Los Angeles’ home field. But the stakes couldn’t be higher, and the stress level was ramped up because football is “very unpredictable, and anything can happen on any given play.”

The Rams, of course, defeated the Cincinnati Bengals, and from the pinnacle of the football world, Dr. Batten reflected on his years with the team: “The big thing is the joy and satisfaction of working with everybody and going through the ups and downs. Whether you win or lose, there have been some really great moments and great relationships that’ll be long-lasting.”

While basking in the glow of an NFL championship, he hasn’t forgotten his roots. “No way I would have been where I’m at,” he says, if he didn’t go to MCW. “I couldn’t be more thankful for the people I’ve met and the mentorship I’ve received.” And he wouldn’t mind the opportunity to dazzle them with his diamond-studded Super Bowl ring.