Reflections on a Life in Science and Education

When Ravi Misra, PhD, arrived in Milwaukee in 1993 to join the faculty at the Medical College of Wisconsin (MCW) after completing a postdoctoral fellowship at Harvard University, he was uncertain about how long he would stay.

“I recall a conversation with my dad, not too long after I moved to Milwaukee,” Dr. Misra shares. “I suggested to him that ‘maybe I’ll be out here for a few years and head back east.’ My dad, who was an immigrant and made a life 12,000 miles and a world away from where he grew up, replied something to the effect of ‘you never know – you may be there longer than you think.’”

Now, almost 30 years later, Dr. Misra is dean of the MCW Graduate School of Biomedical Sciences and professor of biochemistry. In recognition of his leadership and dedication, he received the 2021 Honorary Alumnus of the Year from the MCW/Marquette Medical School Alumni Association.

During his acceptance speech, Dr. Misra said: “While I have not received any academic degrees from MCW, I feel like I truly have gotten the equivalent of numerous advanced degrees in what it means to be a working scientist, an educator and an administrator who’s been striving for institutional excellence and change. Over the past 28 years, I’ve had the good fortune of being schooled by legions of students and so many incredibly talented and selfless colleagues, past and present, who have been committed to the success of MCW, and I continue to learn from so many of them every day. I do owe a debt of gratitude to Owen Griffith, the former chair of biochemistry, who hired me as an assistant professor, and who convinced me, an East Coast boy, to come out to Wisconsin, of all places. One of the few places in the country that I had never been to until I came out for my interview.”

Asked about what he has learned through his work at MCW, Dr. Misra has much to say on the matter. “The opportunity to have different perspectives has given me a much better understanding of what it takes to make scientists and what this whole enterprise of science and discovery is,” he begins. “Understanding it from both sides when training individual students, helping to build programs, but also understanding the institutional component that’s necessary for doing all of this, and that comes from the other perspective of being an administrator. Hopefully, it’s made me more effective at my job.”

Within MCW’s Graduate School, Dr. Misra has been significantly involved in nearly all aspects of graduate education at MCW, as well as having extensive participation in medical education. Dr. Misra has been instrumental in developing several joint programs with the MCW Medical School and with other institutions. He is responsible for the MCW Office of Postdoctoral Education and Career Development. As a research scientist, Dr. Misra’s studies have focused on building a better understanding of the molecular and genetic mechanisms involved in cardiac function and heart formation, with an emphasis on early cardiogenesis and the Serum Response Factor gene. His studies have been supported through grants from the National Institutes of Health for over 15 years, as well as the American Heart Association and the American Federation for Aging Research. In addition, Dr. Misra also has an extensive record of extramural service. All of this has left as much an impact on him as it has the MCW community.

“PhD degrees are transformative degrees – students become scientists,” he says. “From the time you come in, it’s not just about skills and about learning, and I don’t think a lot of people really appreciate what that means. It’s something that you live through. The relationships that they have, with their mentors and their colleagues, both at the student level and the faculty level; all the people they interact with is a critical part of all of this. That’s as important as everything else.” 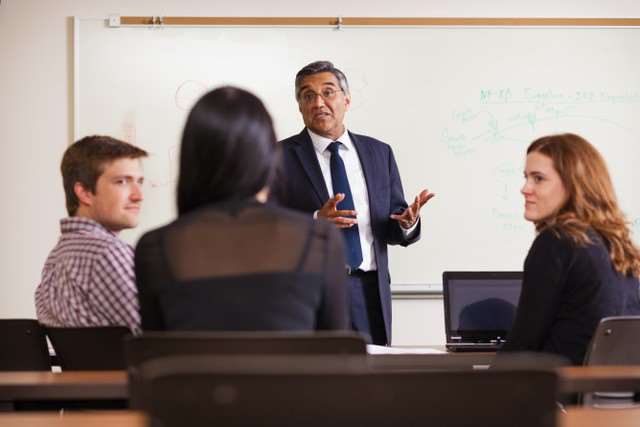 Dr. Misra has always been interested in the educational aspect of science and research. He started as part of the junior faculty and would eventually take part in restructuring some of the graduate programs among some of the basic science departments. That program would become the Interdisciplinary Doctoral Program.

Dr. Misra stresses the importance of balancing the research mission of the work done at MCW with the graduate mission. He explains it like this: “There’s a lot of other things that aren’t obviously education that impact the education mission. As you try to restructure the educational mission, as you try to add programs, those impact other missions as well. And mostly, for graduate education, things are mostly impacted on the research side. The research mission and the graduate mission are intricately connected.”

“For people who want to have an academic career, things have changed a lot,” he continues “It’s become a lot harder and a lot more precarious to go down an academic or research scientist career, and this is largely because of the lack of funding available to do that kind of work. There’s pressure on institutions to invest in faculty. If you’re doing academic research science at a university, the bottom line is that you have to get money. If you don’t get those grants, that could be the end of your career, and it’s become a lot harder to get grants than it was 30 years ago. There’s a lot more pressure to generate those grants for institutions as well.”

Investing in the Future of Science

Investing in the training and the education of the scientists of tomorrow is something Dr. Misra stresses, in no small part because it’s a pipeline that can’t be cut without the risk of losing a generation’s work of science.

“We’ve seen all this amazing work done, for example, recently with COVID, that’s just one of thousands of examples,” he notes. “All of that was done so quickly because of work that was done 10, 15, 20 years ago by scientists who were just doing basic science. If someone’s main concern is cancer, I tell them that we need to invest not only in people currently doing that work and doing those cures, but to invest in the next generation of people that are going to do that. These things take generations. That COVID antibody wasn’t whipped up out of nothing in 18 months; it was built on decades of basic science. You have to invest in that basic science, and you have to invest in those people, those students, those postdocs, those young scientists that are doing that work.”

Dr. Misra also believes strongly in the importance of doctors and scientists coming from every community.

“I think it’s important that we do better with getting a more diverse population in science,” he says. “We need to particularly get students from underrepresented backgrounds into the sciences. That’s at all levels. We have to be more aggressive at the training level and at the early faculty level. We need more mechanisms to help incentivize and attract these talented students to the institution. It’s important because science, particularly basic science, is just not that diverse. It’s important for a variety of reasons, not the least of which is that people who come from different backgrounds bring different perspectives, and they may approach problems in a slightly different way. That’s incredibly important for the vitality of the business, as well.”

There are a number of ways to address this issue, but Dr. Misra says there’s not an especially easy way to do this. “We bring in lots of summer students, for example,” he notes “We bring in undergraduates to have lab experiences for a few months. It’s important to bring in students who might not otherwise have the opportunity to do that, and we need the resources to be able to bring them in.”

“We also have to be willing to diversify what we look like as an institution,” he continues. “People who come from different backgrounds don’t always go to places where they don’t see people like them. We can’t just say that we’re going to do this and that it’ll happen naturally. It has to be somewhat intentional.”

When asked about any memorable pieces of advice he’d been given, Dr. Misra shares: “The best advice, and I’m sure this is true for any student coming in, is to stay focused and to do the best science that you can. Go where the science and where the facts take you. Go where the experiments take you. A lot of what you learn you learn by looking at the examples not only of your mentors but the whole community of people around you. Other students, other faculty. All these things will make you into the scientist that you are.”