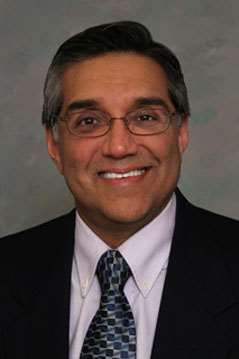 Ravi P. Misra, PhD, professor of biochemistry, has served as Dean of MCW's School of Graduate Studies since 2010.

Within the MCW Graduate School, Dr. Misra has been significantly involved in nearly all aspects of graduate education at MCW, as well as having significant participation in medical education. He has served as a mentor or dissertation committee member for approximately 50 doctoral candidates, postdoctoral fellows and medical students conducting summer research. Dr. Misra is an elected faculty member of the Medical Honor Society, Alpha Omega Alpha.

As a research scientist, Dr. Misra’s studies have focused on building a better understanding of the molecular and genetic mechanisms involved in cardiac function and heart formation, focusing on molecular genetic basis for the development of the coronary vascular system. Congenital cardiovascular anomalies are the most common form of human birth defect affecting one out of every 200 babies born annually in North America.

His studies have been supported through grants from the National Institutes of Health, for over 15 years, as well as the American Heart Association, and the American Federation for Aging Research.

Dr. Misra has also has an extensive track record of extramural service. He has served as a Charter member of the NIH Cardiac Differentiation and Development study section, an ongoing reviewer for the NIH Fellowship Review Panel on Physiology and Pathobiology of Cardiovascular and Respiratory System, a peer reviewer for the American Heart Association, as well as a peer reviewer for numerous scientific journals, and various other national and international scientific bodies, including the American Foundation for Aging Research and the Wellcome Trust.

A native of Philadelphia, Dr. Misra joined MCW's Biochemistry faculty in 1993 after completing a postdoctoral fellowship in microbiology and molecular genetics at Harvard Medical School. He received both his MSc (master of science) degree and PhD in biochemistry from New York University School of Medicine after completing his undergraduate studies in microbiology at Rutgers College of Rutgers University.