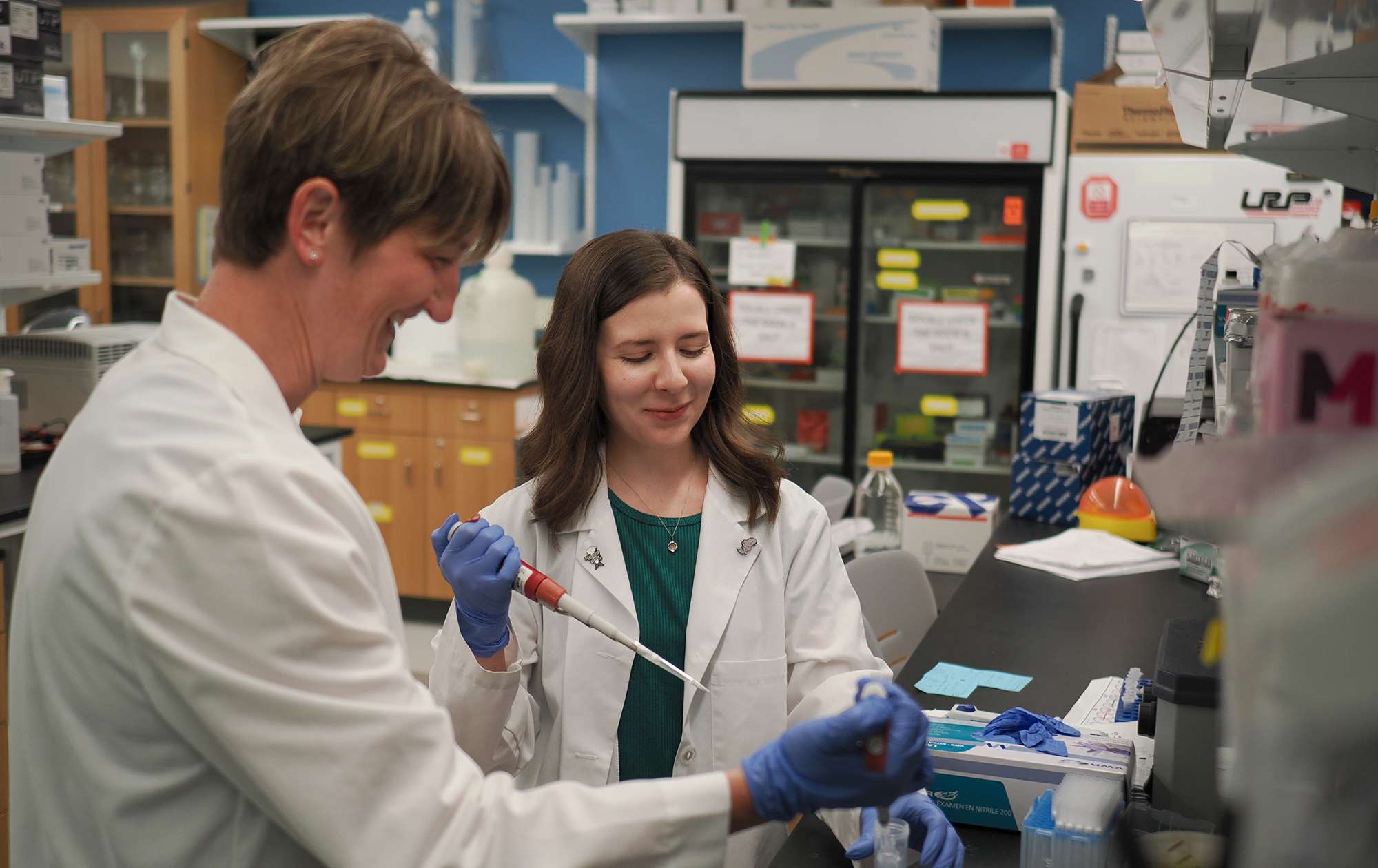 After conducting her first research projects as an undergraduate in a lab focused on spinal muscular atrophy (SMA), Reilly Allison did not expect to continue her research on the disease when she entered the MCW School of Graduate Studies (formerly known as the Graduate School of Biomedical Sciences).

She was surprised to find that Allison Ebert, PhD, associate professor of cell biology, neurobiology and anatomy, and director of the MCW Neuroscience Doctoral Program, also largely focused the research in her own lab on SMA.

Now in her third year of graduate studies at MCW, Allison recalls, “I was initially impressed by Dr. Ebert during a session she led on how to be an ethical researcher, which was part of the neuroscience bootcamp conducted just before graduate school began.” Allison quickly learned about the focus of Dr. Ebert’s lab and was thrilled to conduct her first six-week rotation under Dr. Ebert’s tutelage.

“Reilly Allison came to MCW with great research experience from her undergraduate years at Emory, including on SMA, and I could tell right away that she was going to be wonderful to work with,” Dr. Ebert notes. “She jumped right in and took the initiative on meaningful projects, so I was incredibly enthusiastic to have her join my lab for the remainder of her doctoral program following the completion of her other rotations.”

Allison rejoined the Ebert lab during the hibernation of most research activity at MCW in the early days of the COVID-19 pandemic (detailed in the cover story of the combined Annual Report and Fall 2021 issue of MCW Magazine).

Dr. Ebert credits Allison for not being discouraged and for spending that time of lab hibernation reviewing relevant research studies and making extensive plans for future experiments. In turn, Allison shares that a key to her scientific success has been Dr. Ebert’s mentorship.

“Dr. Ebert always has an open door to answer questions or discuss ideas, but she doesn’t micromanage my experiments. She tailors her mentorship style to each mentee, and, in my case, she knows how to inspire me and work with me to set goals and deadlines that are both ambitious and achievable,” Allison adds.

Dr. Ebert recently was recognized by the MCW Graduate School Association as both the Mentor of the Year and the Teacher of the Year. She was the first faculty member to receive both accolades in the same year.

“I was shocked by getting both awards, and it was an incredible honor to be selected by our graduate students,” Dr. Ebert says. In her mentorship role for Reilly Allison, Dr. Ebert saw an opportunity to highlight Allison’s outstanding work on a manuscript published in January 2022 in Glia (a monthly peer-reviewed scientific journal) by nominating the article for the Paper of the Season Award, sponsored by the MCW School of Graduate Studies.

Allison’s paper investigated several factors that may contribute to the loss of spinal cord motor neurons in SMA. This work is important, as researchers in the Ebert lab and other scientists have found that the effects of the genetic mutation that causes SMA do not account for the full scope of the disease, which includes the loss of motor neurons that leads to progressive weakening of muscles and eventually to death.

“Most studies and treatments focus on increasing the levels of survival motor neuron protein, or SMN, that are otherwise too low due to the mutation in the SMN1 gene causing SMA,” Dr. Ebert shares. “Some therapies do this by amplifying the activity of the SMN2 gene, which normally produces SMN but at a much lower rate. There is a lot of success with these approaches, but we also know they don’t represent the whole picture and have limitations in terms of only being effective at certain points in the progression of the disease.” 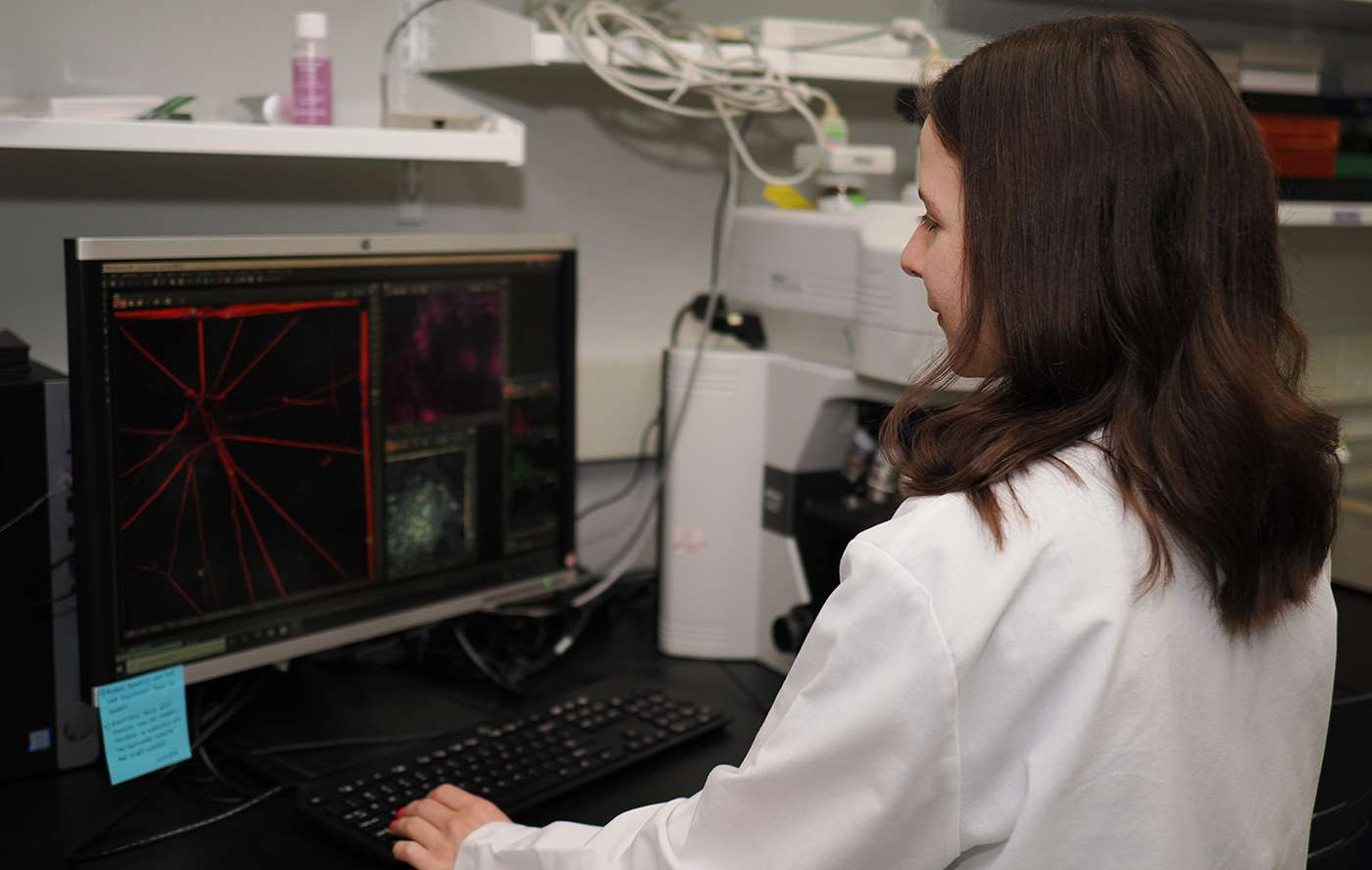 In the January paper in Glia, Reilly Allison and the team investigated the role of GATA6, one of the body’s transcription factors that help control how often the DNA blueprints in genes are used to create needed proteins.

Previous work in the Ebert lab had shown higher levels of GATA6 in astrocytes, which are part of the glial family of cells within the central nervous system that provide structural support and many other functions alongside the more well-known neurons.

In the recent study, Allison used induced pluripotent stem cells generated from patients with SMA and differentiated these cells into astrocytes to study the effects of GATA6 in these cells. She found that these cells were more active than normal astrocytes – which is known to occur in other central nervous system diseases such as stroke or traumatic injury – and produced more factors that promote inflammation.

In addition, Allison found that increasing the levels of GATA6 in healthy astrocytes changed their properties to be more similar to SMA astrocytes, and this accelerated the loss of motor neurons. In contrast, reducing GATA6 levels in SMA astrocytes prevented further rapid harm to motor neurons. Allison and Dr. Ebert view these data as uncovering a new potential treatment option that needs to be explored in future studies.

“Researchers have been looking for more therapeutic targets for SMA, and Reilly found one, which is very exciting. We see this as a possible adjunct therapy to standard treatments to hopefully improve overall patient outcomes,” Dr. Ebert says.

Allison adds, “We’re always thinking about the patients. By targeting astrocytes, we hope to expand the treatment options and extend the therapeutic window for people suffering from this disease.”

“I was very grateful and a bit shocked to be selected. It was nice recognition of all our hard work,” Allison shares.

“I was thrilled for her!” Dr. Ebert adds. “Reilly already has progressed so far so fast, and she absolutely has a bright future as a neuroscientist.”