Medical College of Wisconsin student who has Deferred Action for Childhood Arrival (DACA) status uses his challenges as stepping stones to the future his parents wanted for him.

If Jose Lizarraga Mazaba had been born just 30 minutes north of the health clinic where his mother gave birth in Tijuana, Mexico, his story would have had a different beginning. As it was, his parents took their newborn son to a home that lacked floors and drywall and where they struggled to keep rats and roaches from crawling into their son’s crib at night.

“We used a bucket to shower. Our house was in a barren field where there was no road,” Lizarraga Mazaba says. His mother and father were both poor factory workers and together made 1,000 Mexican pesos – about $50 U.S. – per week.

“When we were robbed a couple of times, my mom knew we had to leave,” he says. “Living in those unsafe conditions, she knew we were not getting anywhere as a family. She wanted better for me.” Lizarraga Mazaba left his extended family behind to move to Milwaukee, Wisconsin, in search of a better future. He overstayed his immigrant visa, which meant he couldn’t visit his childhood home and would probably never see beloved grandparents or cousins again. Yet Lizarraga Mazaba used his challenges to propel himself forward. He says he was always a quiet student who struggled to learn a new language in a foreign culture but remained studious and ambitious.

“I was the type of kid who if you told me I could not achieve something, I was going to try anyway,” he recalls. “I can live with the fact that I tried, and it did not work out; what I cannot do is live without trying.”

Encouraged by a teacher, Lizarraga Mazaba applied and was accepted to the Apprenticeship in Medicine (AIM) summer enrichment program for high school students at the Medical College of Wisconsin (MCW). There, he met Jean Mallett, MCW’s program manager for Student Inclusion and Academic Enrichment, who he says, “flung open the doors” for him to consider a career in medicine and who introduced him to research mentors. Despite not seeing many other students who had Deferred Action for Childhood Arrival (DACA) status going to college, he attended and graduated from Cardinal Stritch University with his bachelor’s degree. Lizarraga Mazaba continued his connection to MCW while a college student by working with Zeno Franco, PhD, associate professor in the Center for Healthy Communities and Research, on community-based clinical research, and later with Jeffrey Whittle, MD, MPH, a professor of medicine with whom he worked as a clinical research assistant at the Zablocki VA Medical Center. Throughout the three years he spent in the labs, Lizarraga Mazaba chose to work long hours and exceeded expectations, learning everything he could and forging strong relationships with mentors as he went.

“I always want to make the most of every opportunity I am given,” he says. “I bothered and pestered my mentors so I could help them and learn as much as possible.”

Over the years, Lizarraga Mazaba earned their trust and respect. As a result, he was invited to present a poster at a conference, publish research findings and work on a mobile app that focused on crisis intervention for veterans. Encouraged by these experiences and by Mallett and his research mentors, he went on to matriculate as a medical student at MCW as part of the first cohort of the Student Enrichment Program for Underrepresented Professions (StEP-UP). Eventually serving as an AIM mentor himself and providing needed mentorship he received to students who are sitting in the seat he was once in. 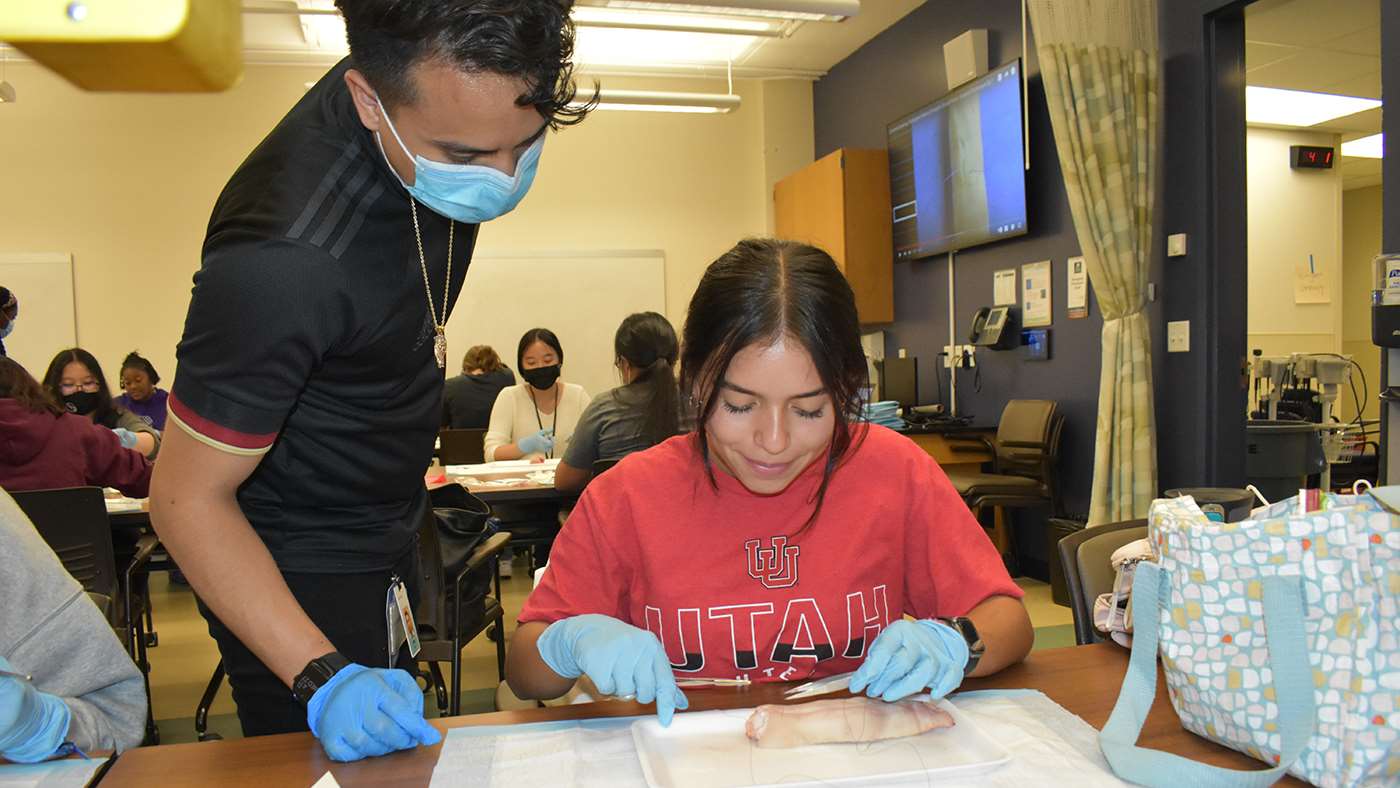 “Seeing students who look and sound like you is such a powerful experience and now on the other side you see the impact you are able to have in helping build the next generation of diverse providers and scientists,” Lizarraga Mazaba says.

Now in his second year, he has been selected to receive the 2022 Dreamers of Wisconsin Scholarship, a prize awarded annually to an undocumented individual pursuing higher education in Wisconsin.

“Receiving this award has been an illuminating moment for me because I realized I have not been a vocal student advocate for other DACA students,” Lizarraga Mazaba says. “In high school, I used to think kids like me did not go to college. Kids with my last name or from the city I am from did not end up in college, let alone medical school. Now, this is a platform for me to show others what is possible. I never saw myself being outspoken about my status and struggles due to it being a very sensitive topic but it’s a must regardless of the negative comments and attention I bring on myself. Unfortunately, many DACA students are not able to continue pursuing higher education due to several factors and I am in a privileged position. I am willing to be transparent and on the front line to help raise awareness and create necessary change both institutionally and externally.”

As DACA students do not have access to federal loans, the scholarship provides essential financial support Lizarraga Mazaba needs to pay for his medical education. Unlike his peers who are US citizens, he cannot apply for Federal Student Aid and relies on scholarships and some funding from other sources, including a partial scholarship from MCW. The rest he fills in with hard work. Between hours devoted to a rigorous study and exam schedule, he works at a restaurant close to MCW to pay his bills. Lizarraga Mazaba says throughout his years as a student, he has always balanced working multiple full- and part-time jobs in addition to his lab work, volunteering, completing school applications and assisting his family as he can. He leans on a mantra he learned from his mother: “sufrir para merecer,” or “suffer to deserve.” 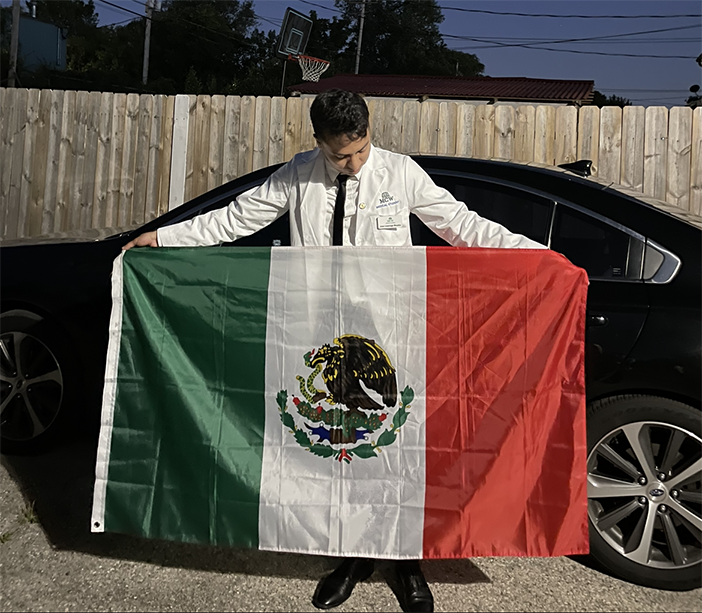 “I always saw my parents struggling to work in housekeeping and restaurant kitchens – hard, third shift jobs to pay bills and put food on the table,” Lizarraga Mazaba shares. “They worked long hours, sometimes six or seven days or nights a week. They taught me that what you put in is what you get out of life. I kept this phrase in my head when I was working 80 or 90 plus hours a week. It was not enjoyable to go to school during the day and then go to work at night or from one job to the next, but I knew, in the end, there are moments you suffer, but you suffer for your goals.”

Though Lizarraga Mazaba’s status as a DACA student poses additional challenges to becoming a doctor, he says his goals are clear.

“I want to support my family, and I want to make a difference in the world for others as a doctor and as a mentor,” he says. As a child, Lizarraga Mazaba witnessed health disparities when he went to doctor’s appointments and served as a translator between health care workers and his mother.

“I was so young I could barely write my name, but here I was attempting to translate complicated medical language into Spanish,” he says. “As I have gravitated toward medicine, I have seen language, lack of insurance and income barriers hurt immigrant women, specifically. Telling someone to stay off their feet for health reasons may not make sense for someone depending on manual labor for their sole income. As a physician, I hope to help address health disparities for communities who go through so much because of their language, documentation status or the color of their skin.”

Lizarraga Mazaba says he is thankful for the tremendous support he has received from MCW mentors like Mallett, Dr. Franco and Dr. Whittle, who he says have believed in him and advocated for his future. He says he would not change anything about his life or origins, despite having to work harder to get the future he dreams of someday.

“These challenges are where you find out what you are made of and offer me a chance to build my character,” Lizarraga Mazaba says. “Is it challenging? Yes. But if I could change anything in the world, I would not change my upbringing. I am proud of what I have done and hope to help others by showing them the possibilities. Life is full of struggle, but I am thankful for all it has thrown, taken away and given me. I am proud of where I come from and what I represent. Soy un soñador y por nada me detengo.”