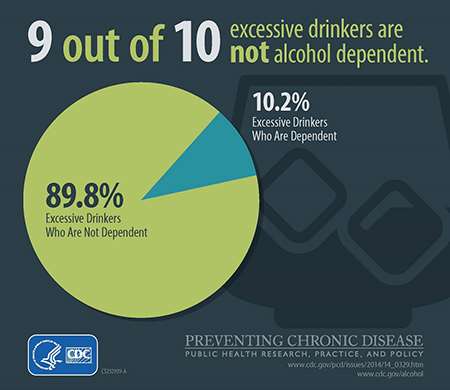 By working together, we can understand the factors that have created the excessive drinking rates. By using research, data and evidence, communities can implement policies and practices that prevent and reduce excessive alcohol use without inconveniencing moderate adult drinkers.

Formed to support communities and decision-makers, the Wisconsin Alcohol Policy Project studies Wisconsin’s trends and supports communities in making positive change by identifying local alcohol-related issues and the policies to address them. Together, we can ensure communities are healthy, safe, thriving and enjoyable to all.

According to the Centers for Disease Control (CDC), excessive drinking is associated with numerous health problems. There are significant short- and long-term health impacts of binge, heavy drinking, underage drinking and drinking while pregnant. Because in Wisconsin every county exceeds the national average of excessive drinking, the Wisconsin Alcohol Policy Project focuses on strategies to reduce excessive alcohol use by working with coalitions and local health departments as well as civic, religious, health care, local government, and state government agencies to make positive change.

Short-term risks of excessive alcohol use include:

Longer-term impacts include increased risks of:

Alcohol Use and Your Health (CDC)
The CDC has excellent resources to understand what excessive alcohol use is and strategies to make changes in the alcohol environment.

Alcohol's Effects on the Body (NIH)
The National Institute on Alcohol Abuse and Alcoholism has an overview of alcohol’s effects on your body.

Why it matters: Data suggest that even one episode of binge drinking can compromise function of the immune system and lead to acute pancreatitis (inflammation of the pancreas) in individuals with underlying pancreatic damage. Alcohol misuse, including repeated episodes of binge drinking, over time contributes to liver and other chronic diseases, as well as increases in the risk of several types of cancer, including head and neck, esophageal, liver, breast, and colorectal cancers.

In addition, crossing the binge threshold increases the risk of acute harm, such as blackouts and overdoses. Binge drinking also increases the likelihood of unsafe sexual behavior and the risk of sexually transmitted infections and unintentional pregnancy. These risks are greater at higher peak levels of consumption. Because of the impairments it produces, binge drinking also increases the likelihood of a host of potentially deadly consequences, including falls, burns, drownings, and car crashes.

Binge Drinking: Health Effects, Signs, and Prevention (WebMD)
This site puts information about binge drinking in terms that are relatable to the general public and the myriad of issues that come from binge drinking.

Bringing Down Binge Drinking (PDF)
Infographic from SAMSHA that shows how prevalent the problem of binge drinking is with those who are under the age of 21.

Rethinking Drinking
Learn about drink sizes and amounts and definition of binge drinking from the National Institutes of Health.

The Burden of Binge Drinking in Wisconsin
Wisconsin report for every county on the impact of binge drinking.

In addition to its health risks to the drinkers themselves, heavy drinking also has secondary risks to other people. Secondary effects include injury, property damage, violence, and death; and frequently require the involvement of law enforcement as well as the criminal justice system. Heavy drinkers may also find their work performance impacted by their consumption of alcohol, have lower wages and lost employment opportunities, experience increased medical expenses, and have problems dealing with family issues.

What can we do about it?

10 areas governments could work with to reduce the harmful use of alcohol | WHO
World Health Organization recommendations.

Why it matters: Underage alcohol consumption is a persistent and serious public health challenge, resulting in deaths each year through motor vehicle crashes, violence, suicide, alcohol poisoning, and other causes. Underage drinking is also implicated in sexual assault and other crimes, impaired brain function, school and social problems, decreased academic performance, and the increased risk of developing an alcohol use disorder later in life. And lastly, it can make changes in brain development that may have life-long effects.

Across the nation and in Wisconsin, underage drinking rates have declined in the last ten years, but Wisconsin remains above the national average.

Alcohol is the most commonly used drug among adolescents. To prevent or reduce underage drinking, it’s critical to take a comprehensive approach (see the four types of law below). It’s also important to recognize that underage alcohol use occurs in the context of excessive alcohol use among adults, which continues to be the third leading cause of death in the U.S. (Stahre et al., 2014).

What can be done in Wisconsin? Twenty-six underage drinking prevention policies have been identified as best practices (or as promising practices suitable for ongoing evaluation) and fall into four categories:

Report to Congress on the Prevention and Reduction of Underage Drinking
Learn about the evidence-based recommendations reported to Congress. 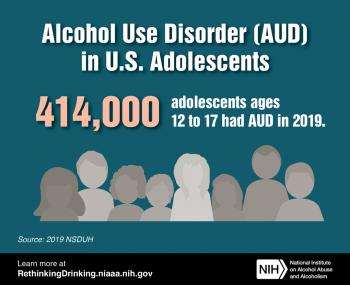 In the U.S., underage drinking contributes annually to more than 3,500 deaths among people under 21, about 190,000 emergency department visits by people under 21 for injuries and other conditions linked to alcohol, and about $30 billion in economic costs.

Alcohol Use Disorder (AUD) is a serious diagnosis that some of our youth receive but is just the tip of the iceberg when it comes to excessive alcohol use. Pre-pandemic data shows that 414,000 adolescents ages 12 to 17 had AUD in 2019. More than 90% of the alcohol consumed by those under age 21 is consumed by binge drinkers. In Wisconsin alone, 17.8% of youth ages 15 to 17 admitted drinking alcohol in the last month, and 9.8% admitted binge-drinking in the last month.

Ensuring minimum age laws are enforced and performing biannual alcohol age compliance checks are important ways to reduce the availability of alcohol to our youth.

Why it matters: In the United States, exposure of the fetus to alcohol is the most common cause of babies born with birth defects and intellectual disability, effects that could be prevented by not drinking alcohol during pregnancy. Exposure to alcohol during pregnancy causes damage to the fetus’s brain and other vital organs. The range of health effects are grouped together as Fetal Alcohol Spectrum Disorder (FASD). According to the Centers for Disease Control (CDC) and the American College of Obstetrics and Gynecology, pregnant women should not drink any form of alcohol as it has been shown to cause serious and negative effects on the development of the baby (fetus).

In Wisconsin, giving birth to a child with Fetal Alcohol Spectrum Disorder (FASD) also has serious legal consequences. In Wisconsin, if a hospital employee, social worker, or intake worker suspect that an infant has FASD, they must refer the infant to a doctor for an evaluation. If the doctor diagnoses the infant with FASD, the doctor is required to report that diagnosis to the appropriate county department or child welfare agency for a child abuse and neglect investigation, and the mother and infant are referred for services and treatment. Wis. Stat. sec. 146.0257.

What can be done in Wisconsin? According to the CDC, state and local governments can:

Due to the concerns with alcohol and pregnancy, it is important that communities have alcohol-free spaces and that all gatherings and businesses have plenty of non-alcoholic beverages available to those who may be trying to become pregnant or are pregnant.

Drinking Alcohol in Pregnancy (Fetal Alcohol Effects)
In the United States, exposure of alcohol to the fetus is the most common cause of babies born with birth defects.

Fetal Alcohol Exposure Fact Sheet (NIH)
Alcohol can impact the development of the fetus at the greatest risk for problems.

Alcohol Use In Wisconsin

Dashboards on alcohol use in Wisconsin by Department of Health Services.

Understand what types of retailers are selling alcohol, which types of alcohol beverages are being sold, and where they are being placed in stores in your community.

The Burden of Binge Drinking in Wisconsin Report (2019)

Wisconsin report for every county on the impact of binge drinking.

The 2017 Wisconsin Youth Risk Behavior Survey was conducted as part of a national effort by the U.S. Centers for Disease Control and Prevention to monitor health risk behaviors of the nation’s high school students.

Wisconsin Epidemiological Profile on Alcohol and Other Drugs (2016)

The Burden of Excessive Alcohol Use in Wisconsin (2013)

The purpose of this report is to present estimates of the economic cost of excessive alcohol consumption in Wisconsin and its impact on the state.

Learn how Wisconsin compares to the country on alcohol consumption and Surgeon General’s relevant reports.

Wisconsin ranks high in excessive alcohol use compared to the nation. The Milwaukee Journal Sentinel reported that Wisconsin is the only state in the country where every county reported excessive drinking. Excessive alcohol use is responsible for approximately 95,000 deaths in the United States each year and was responsible for $249 billion in economic costs in 2010 alone.

The term “excessive alcohol use” includes:

Explore some of the ways the Wisconsin Alcohol Policy Project recommends making changes for a healthier state. Feel free to use our tools and to contact us.

Calculating the Alcohol-Related Disease Impact (ARDI)
ARDI is an online application that provides national and state estimates of alcohol-related health impacts, including deaths and years of potential life lost (YPLL). 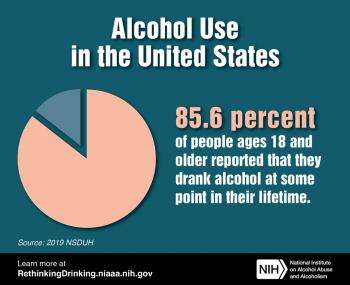 Alcohol Use in the United States Infographic (NIAAA) (JPG)

The Cost of Excessive Alcohol Use Infographic (CDC) (JPG)