“If one could look up the definition of ‘small town USA,’ they would get Pittsville, Wisconsin,” Hannah Marti says of her hometown. The Pittsville native is now in her first year of medical school at the Medical College of Wisconsin (MCW)-Central Wisconsin, located in Wausau, just over an hour away from where Marti grew up.

Despite Pittsville’s small size – the population according to the most recent population survey is 838 people – it is the hometown to three members of the MCW community. Each campus – MCW-Central Wisconsin, MCW-Green Bay and Milwaukee – has a Pittsville native.

By chance, Marti is joining Gavin Hautala, a fourth-year medical student at MCW-Green Bay, in working toward a medical degree at the institution. And coincidentally, MCW assistant professor and internal medicine physician Amalia Lyons, MD ’10, GME ’13, is also from Pittsville. That so many former Pittsville residents now pursue medicine through MCW strikes all three as a rare anomaly, especially being from a town so small that almost everyone in the community has overlapping connections.

“I was excited when I learned they were both coming to MCW,” Dr. Lyons says. “To give you an idea of Pittsville’s size, Hannah’s oldest brother and I went to school together, and Gavin’s sister was in the same class as my youngest sister. Everyone is connected.”

Hautala and Marti agree that Pittsville is the kind of community where neighbors all know each other – where a person cannot go to the grocery store without being recognized, where extended family members live just up the road, and where friends know each other throughout their entire lives.

All three former Pittsville residents grew up on farms, which Hautala says gave him unique exposure to medicine.

“Growing up, I worked on my uncle’s farm doing chores and fixing tractors. I learned to work with my hands, which I think contributed to my interest in working as an orthopaedic surgeon,” he says. “Being from there also gave me unique insight into rural medicine, which is different from practicing in a larger city.”

Hautala, Marti and Dr. Lyons all say they have seen the unique barriers to health care facing patients in rural areas, from people not having access to providers close to home to trauma patients requiring transport to other cities to receive life-saving care.

To help alleviate these issues and physician shortages across Wisconsin communities, MCW’s regional campuses are attracting the next generation of physicians to areas where doctors are needed most. MCW initiatives like the regional campuses and the new MCW Board of Trustees Scholarship, which is awarded to students, including Hautala and Marti, from underrepresented backgrounds including rural areas, will ultimately benefit Wisconsin families and patients across the state. 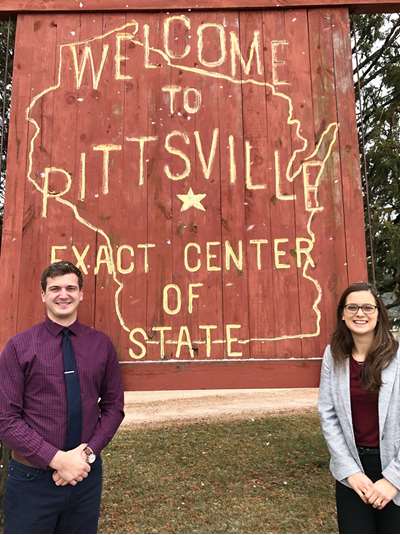 Encouraging students from diverse backgrounds to pursue careers in medicine and science is a national priority, and MCW is contributing meaningfully to this goal through recruitment and admissions initiatives.

“Distance from health care is one large barrier for rural patients, but other barriers include financial issues, people being busy working long hours on farms or people taking a more stoic approach to illness,” Dr. Lyons says. “That’s why the MCW regional campuses are a phenomenal idea for students who are from those areas and understand the local patient populations. If the regional campuses had been available when I was a medical student, I would have loved to have gone to one. Keeping that sense of their own community through training will be a tremendous benefit to our students from towns across Wisconsin.”

Marti agrees that training in the kind of area where she hopes to practice someday is part of what attracted her to the MCW-Central Wisconsin campus.

“When I heard an MCW campus was opening in Wausau, everything about it appealed to me,” she says. “I wanted to stay close to home. I will finish my training in just three years, and when I heard about the small class size and talked to Gavin about his good experience at the Green Bay campus, it solidified my decision to come here.”

Hautala adds that close mentorship and hands-on opportunities are additional benefits of attending MCW’s regional campuses that will help him become a better physician for his patients someday. At MCW-Green Bay, he says he has learned from and worked extensively with attending physicians, delivering babies, first-assisting surgeries and seeing thousands of patients to gain practice gathering histories and performing physical exams.

“I know this level of hands-on experience is a very rare experience for a medical student,” he says. “I also get close mentorship from attending physicians who are extremely supportive of students and want to teach and help us learn.”

Hautala and Marti agree doing clinical rotations in small towns will ultimately benefit their practice as future physicians. Hautala hopes to pursue orthopaedic surgery, where his extensive hands-on experience in medical school will prepare him for residency. Marti says that while she has not yet selected a medical specialty, she hopes to practice in a small rural community similar to Pittsville or Wausau.

“I always want to live in a small town because I love the feeling of it – living in the kind of place where you know your neighbors and you are stopped every five minutes at the grocery store by people you know. There’s a huge need for doctors in these types of rural areas,” she says. “People from a lot of small towns don’t think they can have the opportunity to go to medical school. I feel very fortunate that was not the case for me in Pittsville, and that I am able to wake up excited every day to learn about medicine at an MCW regional campus.”