Our primary research interest concerns multiple myeloma, a neoplasm of terminally differentiated, immunoglobulin-producing B lymphocytes that reside in the hematopoietic bone marrow and are called plasma cells. We use genetically engineered mouse models of human myeloma as the principal experimental model system to elucidate mechanisms of malignant plasma cell development and evaluate new approaches to myeloma treatment and prevention. Working in close association with our clinical colleagues in the Division of Hematology and Oncology, we employ a bench-to-bedside-and-back strategy to translate laboratory advances to curing myeloma. 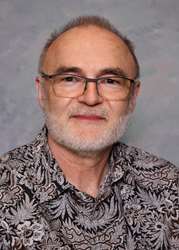 After obtaining his medical degree and board certification in Clinical Immunology from the University of Leipzig, Germany, Siegfried Janz joined the Laboratory of Genetics at the National Cancer Institute (NCI), Bethesda, Maryland. He performed studies on the inflammation-dependent peritoneal plasmacytoma, the first-generation mouse model of human plasma cell neoplasms such as multiple myeloma, plasmacytoma and plasma cell leukemia. His tenure at NCI shaped an enduring fascination with fundamental and translational research into plasma cell malignancies.

In 2007 Janz joined the Department of Pathology at the University of Iowa (UI) Roy J. and Lucille A. Carver College of Medicine as a full research professor to conduct studies on second-generation mouse models of human myeloma dependent on deregulated expression of the cellular oncogene MYC (c-myc). This work took advantage of gene-insertion mice generated in the Janz Lab to mimic different fine structures of the human MYC-activating t(8;14)(q24;q32) translocation. As leader of the cancer genetics program, he was actively engaged in research efforts at the UI Holden Comprehensive Cancer Center.

In 2018 Janz relocated his laboratory to the Division of Hematology and Oncology, Department of Medicine, Medical College of Wisconsin (MCW) Milwaukee, where he joined the Clinical Cancer Center and its Developmental Therapeutics Program. Janz currently works on an NCI-supported project (2R01CA151354), entitled “Biological validation of candidate myeloma genes,” that seeks to elucidate genetic pathways underlying malignant plasma cell transformation. Additionally, he serves as a subcontractor on a NCI project (1R01CA214246) directed by Dr. Alan Lichtenstein, UCLA, concerned with the mechanism by which the ribonucleoprotein hnRNP A1 regulates the translation of MYC message in myeloma cells.

Despite enormous progress in blood cancer research, the ability to treat and prevent multiple myeloma, the second most common hematologic cancer in the United States, remains severely limited. This is particularly true for the subset of patients diagnosed with high-risk myeloma. Addressing the current limitations requires research on the biological significance of candidate high-risk myeloma drivers, such as the transcription factor FOXM1. The main objective of our ongoing project is to elucidate the mechanism by which FOXM1 enhances the aggressiveness of myeloma. The central hypothesis is that FOXM1 affords a promising treatment opportunity for high-risk myeloma. Specific research aims include the assessment of the role of FOXM1 in myeloma biology (e.g., clonogenic growth and survival) and myeloma genetics (e.g., FOXM1 target genes and drug sensitivity). Also included is the determination of the role of FOXM1 in neoplastic plasma cell development, using genetically engineered mouse models of human myeloma as the principal experimental system. A specific objective of the in vivo studies is the correlation of the FOXM1 status of myeloma-like tumors in transgenic mice with the response to small-molecule FOXM1 and proteasome inhibitors. The long-term goal of the project is the development of new, targeted approaches to the treatment and prevention of myeloma.
Regulation of c-Myc proto-oncogene (MYC) translation by heterogeneous nuclear ribonucleoprotein A1 (HNRPA1)

The Janz Lab is a subcontractor for this project, which is directed by Dr. Alan Lichtenstein, UCLA. Its main objective is the development of a scientific rationale for the therapeutic targeting of the internal ribosome entry site (IRES) in the mRNA message of MYC, which effects cap-independent translation to MYC protein – a basic helix-loop-helix (bHLH) transcription factor important for many types of cancer including multiple myeloma. IRES-dependent MYC translation is particularly important for the survival of myeloma cells that undergo endoplasmic reticulum (ER) stress consequent to the unfolded protein response. Specific aims include the elucidation of the mechanism by which MAP kinase-interacting kinase (MNK), hnRNP A1 (HNRPA1) IRES transacting factor (ITAF), and ribosomal protein 25 (RPS25) mediate IRES function. Also included is the design and testing of small-compound inhibitors of IRES function for myeloma treatment. This will rely, in part, on genetically engineered mouse models (GEMMs) of human myeloma available in the Janz Lab. These models will also be used to determine the role of hnRNPA1-dependent IRES activity in the development and progression of myeloma-like neoplasms in mice. The long-term goal of the project is to target MYC protein synthesis for the treatment and prevention of multiple myeloma.