Electroencephalography (EEG), electrocorticography (ECoG), and Magnetoencephalography (MEG) represent important diagnostic tools in the evaluation of patients with epilepsy, especially those being evaluated for ablative surgery or neuromodulatory therapies such as Responsive Neuro-Stimulation (RNS). Electrophysiological research within our epilepsy program broadly focuses on developing and validating novel methods for using these brain signals to localize brain-regions that give rise to seizures and to map important functional areas that need to be preserved when surgical treatments are considered. Studies of the seizure and neurocognitive outcomes of ablative procedures constitute an important and necessary element of research on novel analysis methods.

EEG recordings of seizures using scalp-electrodes are usually one of the first steps in localizing abnormal brain-regions in patients being evaluated for non-drug therapies such as epilepsy surgery. Novel uses of EEG that are being explored by our group include studies of near-DC potentials at the onset of seizures, and source modeling of seizure related rhythms. ECoG recordings, on the other hand, represent brain electrical activity acquired using surgically implanted intracranial electrodes to narrow down the seizure producing areas with high spatial resolution to plan surgical treatment or RNS therapy. ECoG signals are unmatched by any non-invasive technique in providing direct access to the electrical activity of the cerebral cortex. An active line of ECoG research being conducted in our epilepsy program, led by Dr. Manoj Raghavan, is aimed at determining whether novel biomarkers such as pathological High-Frequency Oscillations (HFOs) and graph-theoretic measures based on inter-regional connectivity estimated from brief samples of ECoG can predict the brain-regions that are identified to initiate seizures based on multi-day recordings that are typically necessary. Preliminary results suggest that by applying machine-learning to feature-vectors calculated from each channel of ECoG using connectivity measures and power-spectra may yield high sensitivity and specificity even after excluding traditional markers of the epilepsy such as epileptic spikes and HFOs. In addition to pathological HFOs that arise from the vicinity of epileptogenic cortex, the ECoG signal also carries activity in the high-gamma range (> 80 Hz) that are strongly correlated to population firing rates of neurons during normal functional engagement of the cortex (Figure 4). 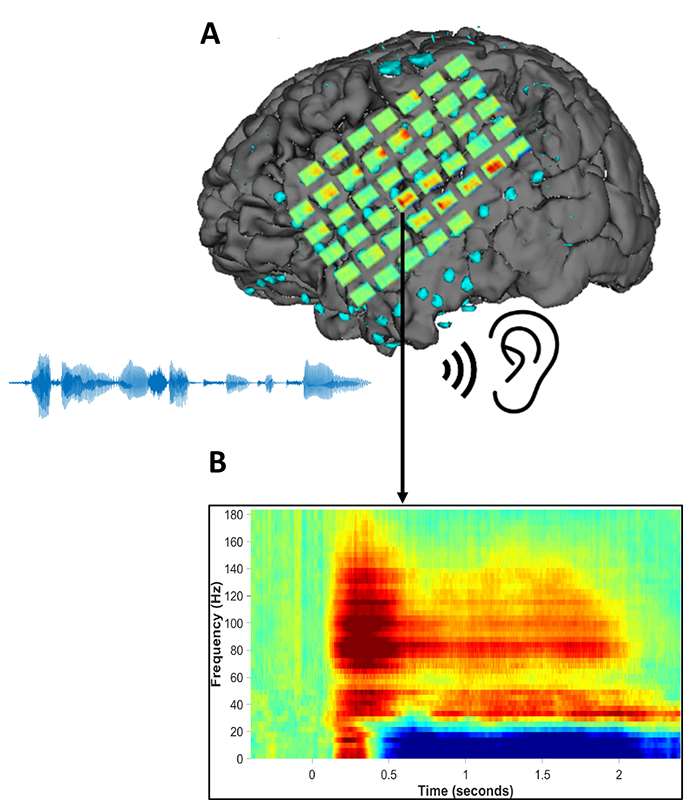 Figure 4. Illustration of the electrocorticography (ECoG) method. (A) An array of time-frequency responses elicited by speech stimuli are shown registered to the subdural grid electrodes overlying the left hemisphere in a patient undergoing invasive EEG recording prior to epilepsy surgery. (B) A typical time-frequency response, recorded from the superior temporal gyrus. After a short latency, there is a marked increase in power (red-yellow colors) in the gamma band and a concomitant decrease (blue) in lower frequency bands.

ECoG recordings thus provide a unique opportunity to investigate models of cortical information processing during cognitive tasks. Task-related high-gamma responses during language tasks has been one of the areas being investigated in our lab given practical applications in mapping language prior to left temporal lobe epilepsy surgeries. Our epilepsy program is also participating in a multi-site NIH funded U01 grant to study task-related ECoG dynamics (site-PI, M. Raghavan; PI, J. Wolpaw), and collaborates on a mentored KL2 research grant on the cortical dynamics of concept retrieval (PI, W. Gross).

The Froedtert & MCW Magnetoencephalography (MEG) Program, the first and only clinical MEG center in the state of Wisconsin, was established in 2008. The program provides a highly sophisticated and rapidly evolving diagnostic tool to help localize epileptic networks and identify functional brain areas prior to surgery for epilepsy, tumors, or vascular lesions. Current clinical MEG applications predominantly rely on single equivalent-current dipoles to model the brain sources of neuromagnetic fields recorded by the MEG sensors. Because single point-dipoles are unrealistic models for many types of cerebral activity, including broad regional epileptic discharges, pathological high-frequency activity, and network activations during cognitive tasks, research in our MEG lab has focused on advancing and validating more realistic, distributed methods for source modeling (Figure 5).

Figure 5. The panels above compare single-dipole models and distributed source models for the same epileptic spike event. (A) The MEG sensor-level recordings with the epileptic spike are shown in the left subpanel as a butterfly plot. The vertical red line marks the time-point for which source models are shown in (B) and (C). (B) The small red sphere displays the location of a single equivalent-current-dipole model. The tail on the sphere indicates dipole orientation. (C) A distributed source model (weighted minimum norm source estimate) for the same time-point.

Functional imaging of MEG responses in the brain related to language processing has been a particular area of focus in our lab, not only because of clinical relevance to presurgical mapping, but also since it exemplifies the type of cognitive processing that requires the development of better source modeling methods. Research in our lab using distributed source modeling methods applied to event-related fields during language tasks suggests that methods analogous to fMRI can be used with MEG source activations for determining hemispheric dominance for language (Figure 6), but also raised concern that event-related fields may be influenced by epileptic networks (Raghavan et al., 2017). Task-related changes in resting brain oscillations provide an alternative physiological signal for mapping cortical engagement. Recent work in our MEG lab has focused on developing novel methods to map functional activation of brain regions using power decrements in the beta band (13-30 Hz) that are known to accompany cortical engagement (Youssofzadeh et al., 2020).

Figure 6. (A) Butterfly plot of averaged MEG event-related responses to single-word speech stimuli. The shaded region represents the temporal-window of interest relevant to language processing. (B) The time-averaged cortical source-activations based on dynamic statistical parametric mapping is shown on a 3-D brain model. (C) Cortical activations after applying a statistical threshold.

Our MEG lab is also actively pursuing methods to characterize the resting background activity of the brain to identify abnormal brain regions in epilepsy. Prior work using source imaging of EEG (Alper et al., 2008) suggests that statistical parametric mapping of EEG background abnormalities can be useful in localizing dysfunction in epilepsy even in the absence of epileptic spike discharges. Ongoing research in our MEG lab is aimed at applying similar methods to quantities derived from cortical source-level activity estimated from MEG recordings. While epileptic spikes represent the traditional interictal biomarker of epileptogenic tissue, there is tremendous interest in using non-invasive MEG recordings to detect and characterize emerging biomarkers that are being revealed by ECoG such as pathological HFOs and abnormal physiological connectivity. Unlike ECoG, which only picks up signals from a limited number of cortical locations, MEG affords non-invasive access to activity across the whole brain. MEG does, however, suffer from some signal degradation compared to ECoG. Research using these two types of signals is therefore complementary: while results from ECoG can inform and motivate specific types of analyses of MEG signals, our MEG lab also strongly believes in taking advantage of ECoG signals recorded from patients who have previously completed MEG studies to develop and validate MEG methodologies.