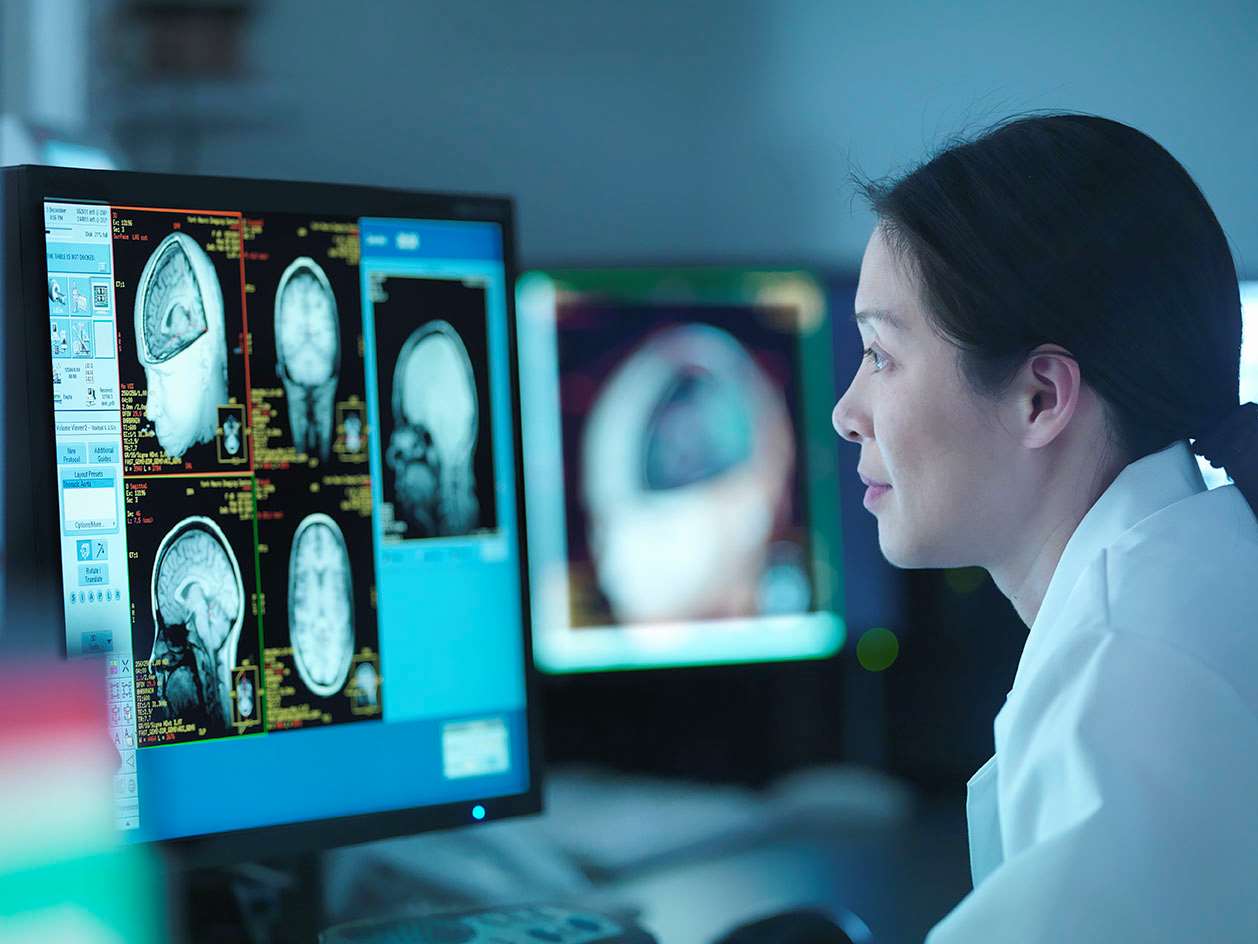 WE Energies Center for Aphasia Research and Recovery (WE-CARE)

Aphasia refers to the loss of ability to communicate normally using speech and other forms of language. It is an unfortunately very common side effect of stroke, affecting roughly one in three stroke victims (Engelter et al., 2006). About 1 in 250 people alive today has aphasia, making it one of the most prevalent causes of serious long-term disability. Aphasia is devastating and often isolating for patients, their families, and caregivers, who struggle daily with inability to communicate and join in social activities. Aphasia treatments include speech and language exercises and pharmacologic therapies, but these treatments are only modestly effective, leaving patients with residual deficits that significantly add to the cost of stroke-related care (Ellis et al., 2012). Despite a huge need for more effective treatment options, research on aphasia treatment has historically been neglected and underfunded. 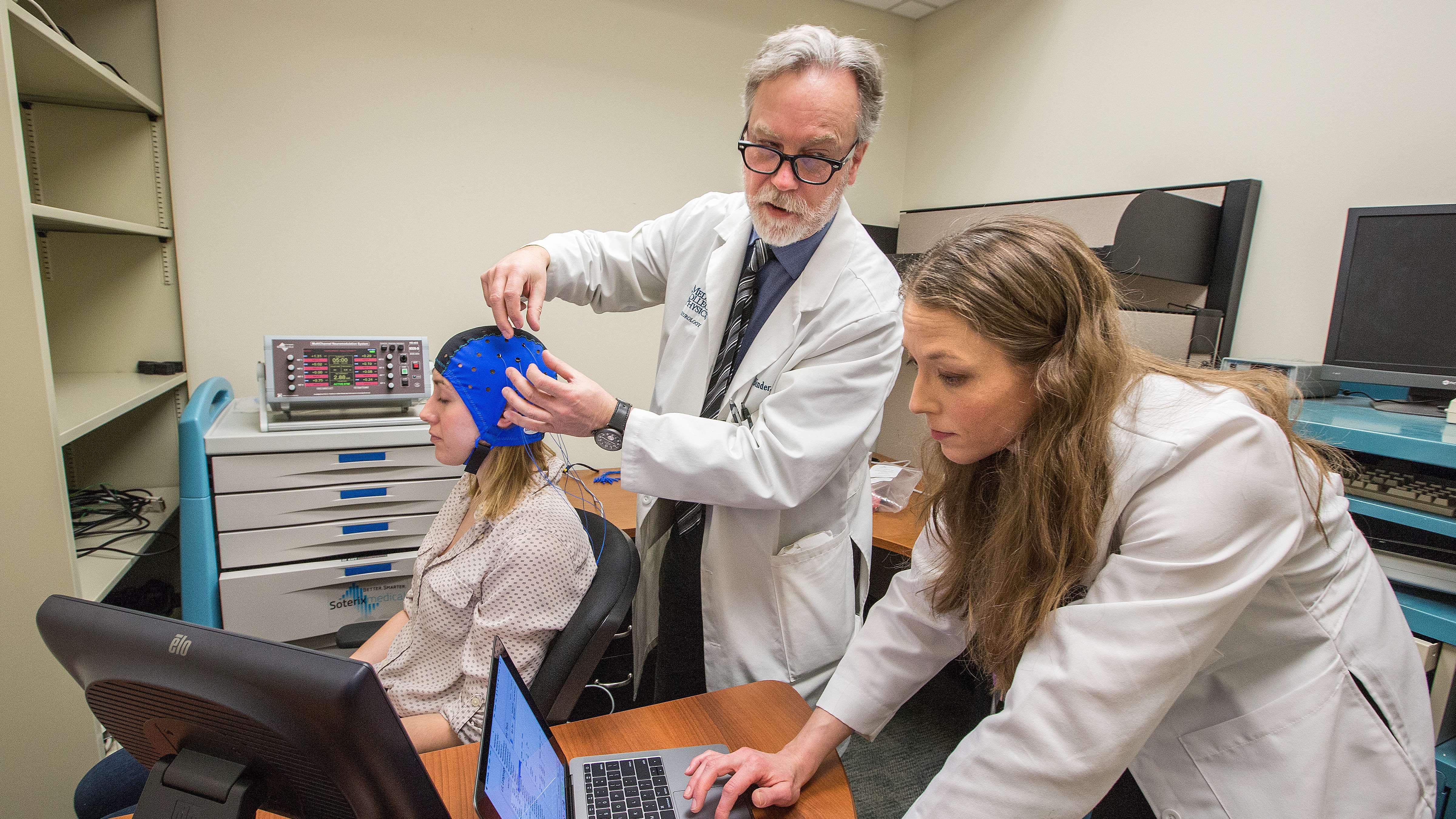 Research is headed by neurologist Jeffrey Binder, MD, in collaboration with neuropsychologist Sara Pillay, PhD, neuroscientist Priyanka Shah-Basak, PhD, and other scientists at MCW and UW-Milwaukee. This work is conducted in close collaboration with the Language Imaging Laboratory, also directed by Dr. Binder, which has for decades been at the forefront of neuroimaging research on basic mechanisms of language processing in the human brain. Our aphasia studies build on the insights resulting from this foundational research, which has informed new methods of aphasia diagnosis and spurred novel theories of language learning and dynamic recovery processes. Funded by grants from the NIH, the Advancing a Healthier Wisconsin Endowment, and the WE Energies Foundation, our mission is to advance the science of language rehabilitation and assess promising new therapeutic approaches for people with aphasia.

The intensive Program of Aphasia Therapy (IPAT) is a comprehensive language therapy program led by a multidisciplinary team with expertise in speech therapy, neurology, neuropsychology, and biomedical engineering. Our mission is to offer cutting-edge, evidence-based treatments for aphasia in a daily, intensive format that is generally not available elsewhere. The program is tailored to individual needs and goals while emphasizing a sense of community and well-being through functional communication.

ARCLAB tests have been administered to over 100 people with aphasia, many of whom have also participated in “lesion mapping” studies using high-resolution brain MRI to characterize areas of damage from stroke (Figure 1).

Figure 1. Lesion mapping using high-resolution brain MRI in a patient with stroke-induced aphasia. The top row shows serial MRI “slices” through the left hemisphere. Damage from the stroke is visible as a darkened region affecting mainly the frontal lobe. These areas of damage are labeled digitally in the lower panel using a combination of automated and manual segmentation methods.

The combination of imaging and test performance data allows correlations to be made between performance deficits and lesion locations, using a statistical method known as “voxel-based lesion-symptom mapping” (VLSM). Essentially, VLSM compares the performances, on any given test, of patients with and without damage at a specific site in the brain, producing a statistical value expressing the strength of the relationship between damage at the site and impaired performance. This process is repeated for all sites of interest, resulting in a map showing the areas where damage is correlated with a particular type of language impairment (Figure 2).

Functional magnetic resonance imaging (fMRI) is another important tool for understanding processing impairments and brain reorganization in people with aphasia. While damaged language systems undergo varying degrees of neural reorganization during recovery, the precise mechanisms whereby reorganization improves performance are unclear. One little-explored avenue for addressing this problem is the analysis of brain activity underlying trial-to-trial variability in aphasic performance. People with aphasia often show only partial impairments on a given task, manifested by errors on some but not all trials. This trial-level variation offers a potential window into understanding how damaged language networks function and which behavioral and neural factors are associated with performance. Using this approach, WE-CARE researchers discovered that patients with phonologically mediated reading impairments perform better on an oral reading task when a brain region called the angular gyrus is activated (Pillay et al., 2018) (Figure 3). 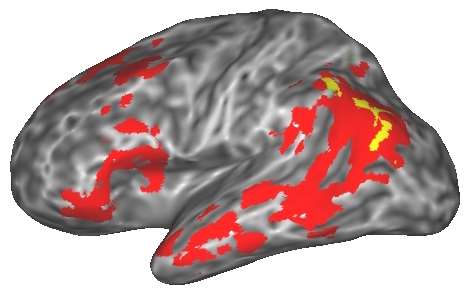 This region is a key hub in the “semantic” network that stores word meanings (Binder et al., 2009). This finding suggests a therapeutic approach in which these brain regions are stimulated with a low-level direct current (TDCS) during reading exercises, thereby enhancing the participation of these regions.

A promising new approach to aphasia rehabilitation is transcranial direct current stimulation (tDCS), in which a weak electrical current is administered via scalp electrodes during language therapy. The current is thought to modulate resting membrane potentials of neurons, either by decreasing (cathodal tDCS) or increasing excitability and potentiating N-methyl-D-aspartate action (anodal tDCS). When given simultaneously with language training, tDCS is thought to induce neural plasticity that outlasts the duration of stimulation. A growing number of randomized, sham-controlled studies have provided evidence for the efficacy of tDCS for improving language recovery after stroke (Shah et al., 2013; Shah-Basak et al., 2016), and preliminary evidence suggests that behavioral improvements from multi-session tDCS may be maintained at follow-up intervals ranging from 1 week to 12 months. TDCS has several advantages that make it of clinical interest, including its excellent safety profile, low cost, ease of use, and portability.

While these preliminary studies support the feasibility and potential clinical utility of tDCS in aphasia therapy, they leave open many critical questions regarding its optimal use. It is unknown, for example, which specific language networks should be targeted by tDCS to optimize effectiveness, or what type of language training is optimal. No studies have yet used rigorous, double-blind, sham-controlled methods to compare the effectiveness of different sites, durations, and frequencies of tDCS treatments. Moreover, it is likely that optimal parameters will vary between patients depending on the location and volume of damaged tissue and extent of functional disconnection between surviving brain areas, and that optimal therapies will therefore need to be personalized based on morphometric imaging, functional connectivity imaging, and multivariate behavioral assessments that delineate the underlying language processes impaired in each patient.

To address some of these knowledge gaps, WE-CARE researchers are conducting a large, randomized, double-blind clinical trial of tDCS in people with stroke-induced aphasia, funded by grants from WE Energies, AHW, the MCW Stroke Rehabilitation Center, and the MCW Cognitive Neuroscience Research Program. Based on our previous fMRI work suggesting a key role for the semantic system in compensating for phonological system damage (Pillay et al., 2018), a “high-density” version of tDCS (HD-tDCS) that allows more focused current delivery will be used to target a key hub in the semantic network, the left angular gyrus, in people with phonological impairment (Figure 4).

Figure 4. (A) Scalp locations of the 4x1 HD-tDCS montage centered on the left parietal region of a person with aphasia; (B) Accompanying electric field distribution (V/m = volts per meter) modeled on the patient’s brain MRI using SimNIBS software. The strongest electric fields occurred over the angular gyrus.

A second ongoing study, directed by Dr. Elias Granadillo, investigates HD-tDCS in people with logopenic-variant primary progressive aphasia (lv-PPA). Primary progressive aphasia (PPA) is a family of idiopathic neurodegenerative disorders that primarily affect language networks, leading to slowly progressive loss of language and related cognitive abilities. The logopenic variant is characterized by degeneration of the phonological system, causing inability to think of words, name objects, and retain word sounds in short-term memory. In this study, anodal HD-tDCS (or a sham control) is administered to the posterior left supramarginal gyrus, a hub region for phonological processing (see Figure 2), during training on picture naming and speech repetition tasks. This work is supported by grants from the MCW Neuroscience Research Center and AHW.

Traditional speech-language therapy in the US is provided for 2-3 hours per week over an extended period of 12-24 weeks. In contrast, intensive therapy is defined as >15 hours per week of individualized or group therapy over 2-4 weeks. A 2016 Cochrane review involving over 1200 aphasia survivors, concluded that high-intensity therapy improved language use in daily life and reduced aphasia severity compared with lower-intensity therapies (Brady et al., 2016). With the help of funding from WE Energies, our team is organizing an Intensive Program of Aphasia Therapy (IPAT), to be launched in late 2021. IPAT will be offered as 3-week therapy courses 2-4 times annually. Participants will receive 4 hours of individualized and group therapy daily, including sessions with concurrent tDCS, and participate in socializing and educational activities. Opportunities to participate in concurrent research studies will be offered and encouraged. Training and educational activities for caregivers will also be provided.