Regulation by the phasevarion occurs via phase variation of a DNA methyltransferase, Mod, which leads to the coordinated regulation of numerous genes throughout the bacterial genome via epigenetic mechanisms. This mechanism is especially interesting because in contrast to typical phase variation, in which expression of only a single gene is affected, the phasevarion affects the expression of many genes simultaneously (Fig. 1). 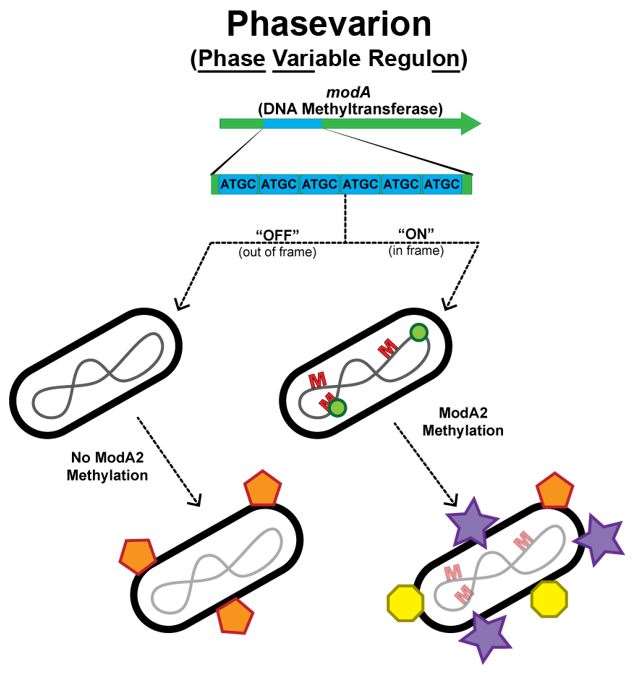 Figure 1. Regulation by the phasevarion. Phase variable expression of the DNA methyltransferase, ModA, regulates the expression of many bacterial genes simultaneously. This results in two genetically identical, yet phenotypically unique populations of bacteria, referred to as modA ON and modA OFF. Bacteria can rapidly and reversibly switch between these two subpopulations.

We have a specific interest in the phasevarion of nontypeable Haemophilus influenzae (NTHI). NTHI causes otitis media, or middle ear infection, a disease that afflicts millions of children worldwide, as well as sinusitis and multiple other diseases of both the upper and lower respiratory tracts. We utilize a range of in vitro assays and experimental disease models to determine bacterial genes required for persistence and define their specific roles in pathogenesis in order to develop improved strategies to combat infection and disease. In vitro studies have shown that the NTHI phasevarion affects numerous disease-relevant phenotypes, such as resistance to reactive oxygen species and biofilm formation (Fig. 2). 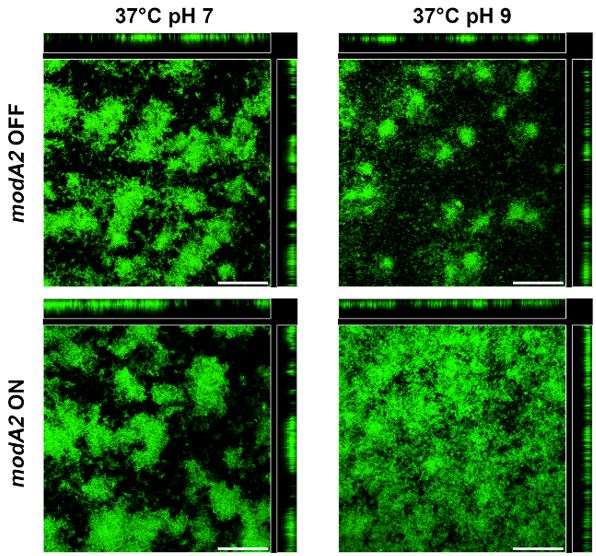 Figure 2. Representative images of 24 hour biofilms stained for viability and imaged by confocal microscopy. Biofilms formed by either population at a neutral pH had a similar structure composed of dense towers (green) and intervening water channels (black). At an alkaline pH, like that found in the middle ear during disease, each population formed biofilms with distinct structural organization and modA2 ON produced biofilms with greater overall biomass. Differences in biofilm formation under microenvironmental conditions similar to those of the chronically diseased middle ear (37°C, pH 9) may impact the course of disease, host immune responses, and treatment effectiveness. Brockman et al mBio 2018.

To investigate the role of the NTHI phasevarion during disease, we utilize several models of experimental disease. We have found that the phasevarion of NTHI significantly affects the severity of experimental otitis media, regulates several disease-related processes and impacts host immune response. Ongoing work in the laboratory seeks to define how regulation by the phasevarion modifies host immune responses, and will determine the specific bacterial virulence factors involved in recognition by the host. To validate these results, we use human peripheral blood cells and primary tissue cultures to confirm the findings of experimental models (Fig. 3). The ultimate goal of this work is to identify potential new targets to prevent and treat disease due to NTHI, as well as inform the current development of vaccine strategies against bacteria that utilize a phasevarion. 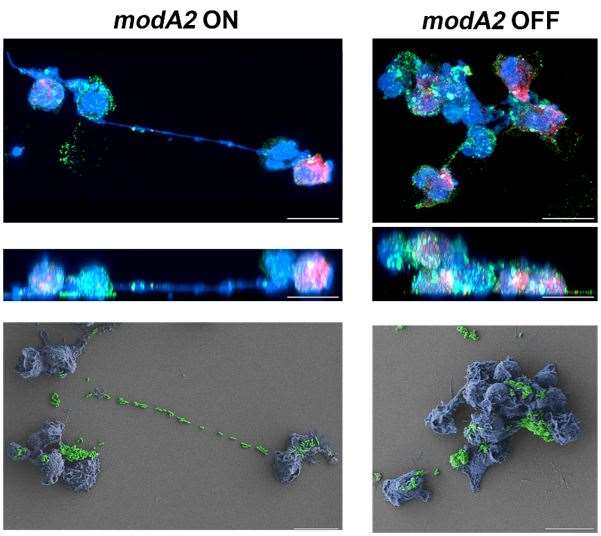 Figure 3. Human neutrophils responded differently to modA2 ON and modA2 OFF subpopulations. Human neutrophils were incubated for 3 hours with the modA2 locked ON or the modA2 locked OFF population at an MOI of one NTHI per ten neutrophils. The top panels are representative confocal images from top down and side view labeled for: DNA (blue), neutrophil elastase (red) and bacteria (green). The bottom panels are representative scanning electron micrographs of neutrophils (blue) and bacteria (green). Neutrophils challenged with modA2 ON produced neutrophils extracellular traps (NETs) that effectively capture and kill bacteria; while neutrophils challenged with modA2 OFF appeared clumped and contained many intracellular and extracellular bacteria.

Return to the Brockman Lab